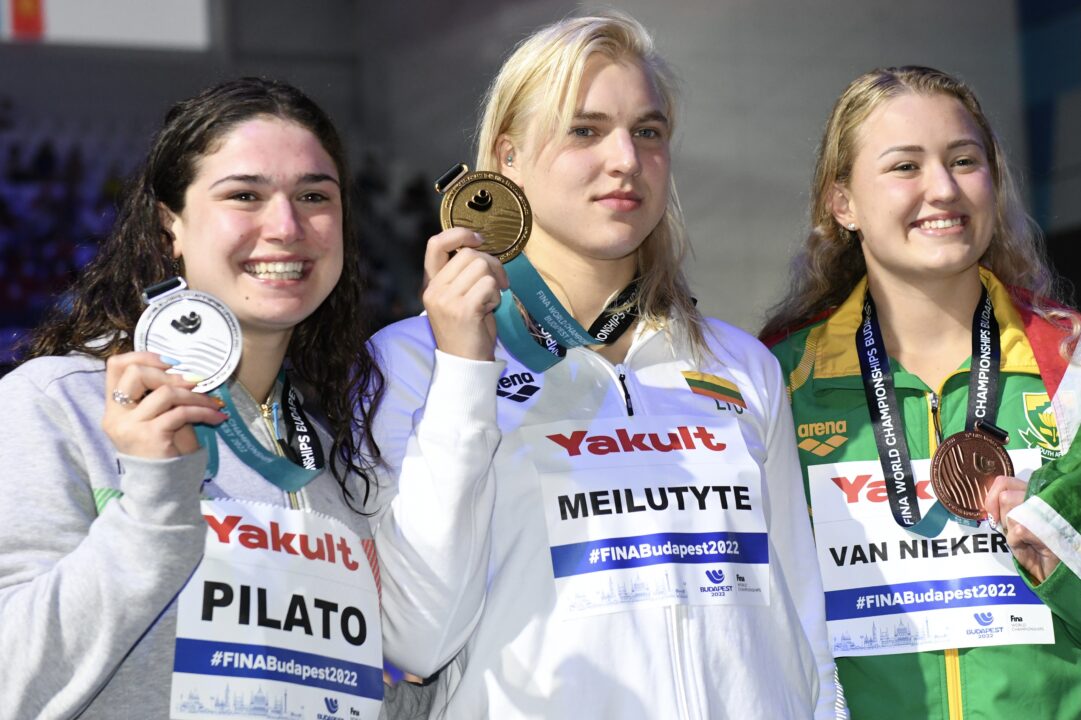 Benedetta Pilato will have a chance to avenge her Worlds defeat in the 50 breast, where five of the seven fastest women this year are racing in Rome. Archive photo via Fabio Cetti

Just when it seemed like there had been a changing of the guard among women’s breaststrokers, 25-year-old Lithuanian Ruta Meilutyte came out of retirement to edge 17-year-old Italian world record holder Benedetta Pilato for the 50 breast title at the World Championships in June.

Two months later, Pilato will have a chance for revenge in Rome, where five of the seven fastest women this year are racing in the 50 breast.

The rising star will face off against the resurgent veteran in both the 50 and 100 breast. Pilato holds the fastest times this year among the field in both events, but she was a couple tenths of a second slower in each at Worlds. Buoyed by a home crowd this week, she could bounce back in a big way and build on her first world title in the 100 breast from Budapest.

First, though, Pilato has to worry about simply making it out of the heats under the meet’s unique qualification format. At European Championship meets, a country can enter up to four individual swimmers into each event. Only two of those four, however, can progress out of the prelims (be that to semi-finals or finals, depending on the event).

That likely spells an early exit for one unlucky Italian in all three breaststroke events as they boast three swimmers with top-10 entry times in each. Most notably, in the 100, Arianna Castiglioni, Pilato, and Martina Carraro are the No. 2, No. 3, and No. 4 seeds, respectively.

Pilato broke the world record during the semifinals of last year’s Euros just hours after setting the world junior mark in the 100 breast. She’ll have a target on her back this time around with her world-leading time of 29.58 from April, and Meilutyte will be coming for the crown again. Meilutyte, the former world record holder, went 28.70 at Worlds to beat out Pilato’s 29.80 a full decade after breaking onto the scene as a 15-year-old Olympic phenom. It was her best swim since her former world standard of 29.48 set back in 2013. Meilutyte only returned to competition last December after retiring in 2019 at age 22.

Pilato’s teammate, Castiglioni, is one of only three swimmers with an entry time under 30 seconds, along with Pilato and Meilutyte. The 24-year-old will be likely hungry to prove herself in front of a home crowd after being DQ’d from Worlds in June. The stakes will be high given the two-swimmer-per-country limit after prelims, beginning with the 100 breast heats on Friday morning all the way through the 50 breast prelims and semifinals next Tuesday.

Imogen Clark is right on the cusp after clocking a British record 30.02 at last month’s Commonwealth Games en route to a silver medal. Clark was a late addition to the squad, signing up for her third major international meet in two months. We’ll see how much the 23-year-old has left in the tank, or if she’s just getting started.

Keep an eye out for 15-year-old Estonian Eneli Jefimova, who stands out as the youngest in the field of the 50, 100, and 200 breast events this year. She recently swept all three races at Euro Juniors last month and placed sixth at Worlds in June with a 30.25. Like Pilato, she’s still figuring out how to save her best swims when it matters most, evidenced by her personal-best 30.08 during the heats at Worlds that ranks her as the eighth-fastest performer this year.

Sweden’s Sophie Hansson and Belgium’s Florine Gaspard should also compete for a spot in the final, with their season-best times sitting about half a second behind the pack. As the No 4 seed, Carraro would be well-positioned to make the final if it wasn’t for her two Italian teammates ranked above her, which will make it difficult for her to escape prelims.

Less than two months ago, Pilato came back from fourth at the 50 to win her first world title in Budapest with a time of 1:05.93. It was slightly off her 1:05.70 from April’s Italian National Championships that ranks as the top time among the field this year. Both Hansson and Castiglioni have better entry times, but they took place last summer.

This time it’ll be Meilutyte seeking to avenge a Worlds defeat, as she took bronze behind Pilato and Anna Elendt. Meilutyte’s 1:06.02 ranks as the second-fastest time in the field this year, but she comes in as the No. 5 seed behind a trio of Italians (Castiglioni, Pilato, and Carraro) and Hansson, the defending champion.

Hansson’s best time this year is a 1:06.30 from the semifinals at Worlds, where the Olympic finalist later placed sixth. Castiglioni (1:06.13) and Carraro (1:06.21) are the reigning silver and bronze medalists, respectively, at Euros. The 29-year-old Carraro took the first part of the season off, presumably to focus her energy on this meet, but she faces another uphill battle in the 100 since only two Italians can advance past prelims.

Kotryna Teterevkova owns the fifth-fastest time this year with a 1:06.35 from Lithuanian National Championships in February. The 20-year-old Lithuanian is fresh off the European University Games from the end of July, where she won gold in both the 100 breast (1:07.19) and 200 breast (2:24.89).

Jefimova, the No. 8 seed, could vie for a podium spot in the 100 breast as the sixth-fastest performer this year. During the semifinals of last year’s event, she became the fastest 14-year-old ever with a 1:06.47. Mona McSharry could also be in the mix for the final if she can come close to her Irish record 1:06.39 from last summer’s Olympics.

Switzerland’s Lisa Mamie is the top seed in the 200 breast with an entry time of 2:22.05, but the reigning silver medalist hasn’t come within three seconds of that mark this year.

Unless she’s been strategically saving her energy, Teterevkova appears to be the favorite thanks to her Estonian record of 2:22.88 from February, which stands as the sixth-fastest performance this year. It’s also almost a second faster than the next-fastest member of the field this year.

Francesca Fangio has the second-fastest time this year among competitors with a 2:23.60 from April, just off her Italian record of 2:23.06 from last summer. At Worlds, she tallied a 2:25.08 in the final to place seventh, more than a second behind the fifth-place Teterevkova. The Worlds finalists are the only two under 2:24 so far this year.

Hansson, reigning champ in the 100 breast, might have her best opportunity to medal here in the 200. She boasts the third-fastest time this year, just .18 seconds slower than her lifetime best. McSharry will also be eyeing a medal after picking up hardware in the event on the Mare Nostrum Tour, securing a silver in Barcelona with a 2:25.58 before taking bronze in Canet with a 2:26.80.

Jefimova has momentum in the 200 after coming back from fourth at the 150-meter mark to win gold at Euro Juniors, where she established a new Estonian record of 2:26.85 in the process.

No. 4 seed Jessica Vall Montero of Spain could be a factor if she can regain her peak form, but she’s been over two seconds slower than her personal-best 2:23.31 so far this year. Carraro will likely have to battle countrywoman Lisa Angiolini for the second Italian spot after the heats. With the sixth-fastest time this year in the field, the No. 9 seed Angiolini might have a slight advantage over the No. 6 seed Carraro.

I think meliutyte can potentially reclaim her former WR this season do I think it’s possible? Yes! And she would be to my knowledge the first swimmer to ever do that. Break a WR, retire, make a comeback and re claim your world record.