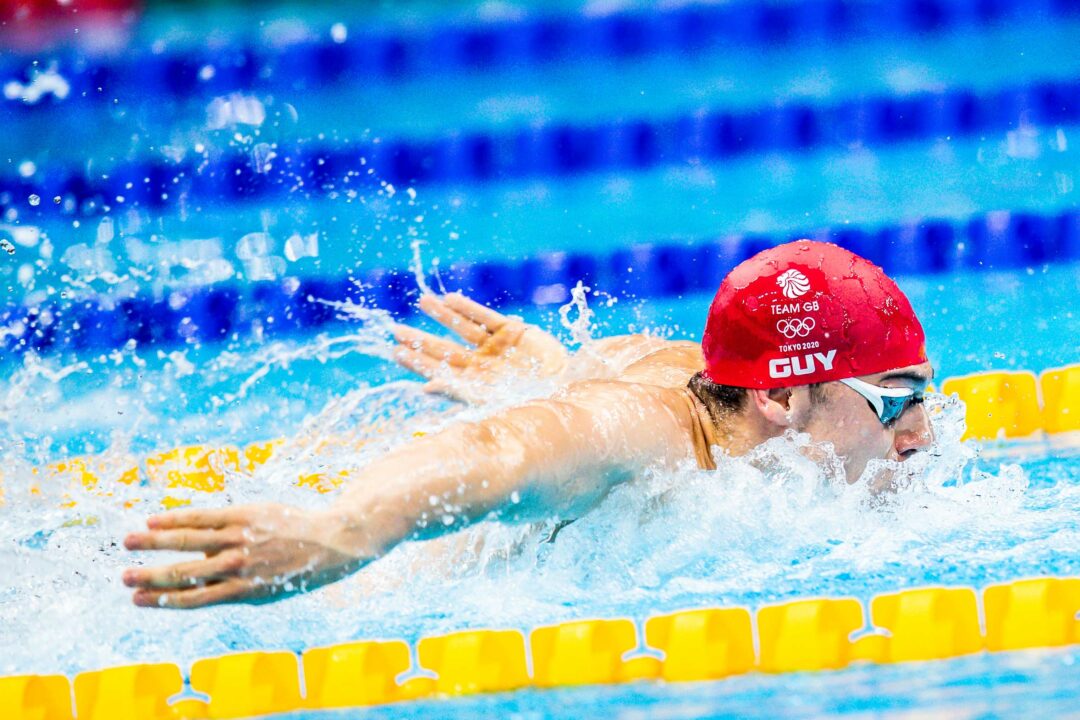 England's James Guy is a top contender in the men's 100m and 200m butterfly events. See who else could haul away some hardware in Birmingham. Archive photo via Jack Spitser/Spitser Photography

The 2018 edition of the Commonwealth Games saw South Africa’s Chad Le Clos complete a full butterfly sweep, topping the podium in the 50m, 100m and 200m distances of the discipline. Now 4 years later, we’re looking to see who can impede Le Clos’ reign, with England, Scotland and Australia among the nations ready to step it up in Birmingham.

Four years ago, the aforementioned Le Clos took the 50m fly gold by a comfortable .30, as Trinidad & Tobago’s Dylan Carter snagged silver in 23.67 while fellow South African Ryan Coetzee earned bronze in 23.73. With Coetzee out of the picture this time around, the podium will indeed look different.

26-year-old Carter looks primed to make a run at the top prize, coming off of a series of lifetime bests at this year’s World Championships. After having never before dipped under the 23-second threshold, the former USC Trojan ripped a big-time 22.87 national record in the heats there in Budapest.

The sprint ace scored another near-PB with a 22.98 in the semi-finals before scoring a new TTO standard in 22.85. With that final performance, Carter found himself just .06 outside of bronze and hungry to improve upon that position here in Birmingham.

Possible roadblocks to Carter’s quest include 50m freestyle world champion Ben Proud. A favorite to win the event 4 years ago in the Gold Coast, Proud wound up getting disqualified in the heats due to a false start.

Although the English star indeed won the 50m free Commonwealth Games title, he has recently said he is gunning for the 50m free/50m fly double title to come full circle from the same feat he achieved at the 2014 edition of these Games in Glasgow.

But there’s a trio of Australians who also have their sights set on the 50m fly gold, with Kyle Chalmers, Cody Simpson and Matt Temple ready to make some noise.

Chalmers is relatively new to racing the fly discipline in international competition, having stuck to the 50m and 100m events at his nation’s Trials earlier this year. There in his home nation, he popped a 50m fly time of 23.21 to take the domestic title, although he wound up scratching the event in Budapest.

As for Simpson and Temple, they own personal bests of 23.68 and 23.75, respectively. Those times are well behind another contender in Tzen Wei Teong of Singapore who finished 8th in this event at this year’s World Championships.

Between Teong and Chalmers, we gave the nod to the Aussie, given that his 23.21 personal best was produced only months removed from shoulder surgery. With more time under his belt to recuperate and Chalmers’ extraordinary history in the sprints, he has the capability to produce something special in this event just about one week from now.

Other contenders include England’s Jacob Peters, Canadian IM’er Finlay Knox, and Singapore’s other entry, 19-year old Mikkel Lee, who is the country’s third-best in the event behind Joseph Schooling and Teong.

Le Clos was indeed the 2018 Commonwealth Games champion in this men’s 100m fly event, however, the 30-year-old wound up dropping the event at this year’s World Championships.

The South African’s time of 50.65 which took gold in Glasgow stands as the competition record, while at the 2019 World Championships he collected bronze in 51.16. However, since then Le Clos has fallen off a bit, including placing 18th at the 2020 Olympic Games in a mark of 51.89.

We’ve seen several new sub-51 second swimmers step up their game, which makes this event one of the most competitive in Birmingham.

Canada’s Josh Liendo put on quite the performance at this year’s World Championships, busting out a huge personal best of 50.88. That resulted in Liendo earning the bronze and also establishing a new national record. Entering Budapest, the 19-year-old’s personal best was the 51.40 he logged last year at the Canadian Olympic Trials.

Australia’s Matt Temple also has been in the 50-second territory, crushing a new lifetime best and Australian national record of 50.45 at the 2021 Australian Olympic Trials. The Marion swimmer ultimately finished with a time of 50.92 to tie for 5th place in Tokyo. He followed that up with a 4th place finish in Budapest with a final time there of 51.11.

In a vacuum, Liendo might be at a point where he could pull the upset here. However, all indications are that Canada was full-bore for the World Championships, and that even those Australians who were at the World Championships are still targeting these Commonwealth Games. With Temple on his way toward a peak and Liendo trying to hold on to his, the Australian has to be the favorite.

England’s James Guy is a mainstay in this men’s 100m fly event, having snagged silver behind Le Clos 4 years ago with a time of 51.31.

Guy is a bit of a wildcard, however. He owns a career-quickest time of 50.67 from the 2017 World Championships, a competition in which he ultimately took bronze in 50.83. But two years later in Gwangju he fell to 7th in 51.62. He also dropped the event at the 2020 Olympic Games and most recently had to settle for 11th place in Budapest with a semi-final time of 51.50.

Then there’s the Aussie drama surrounding Kyle Chalmers and Cody Simpson, with this men’s 1fly event at the center. Chalmers originally said he would not be competing at this year’s World Championships, but when he took silver at the Aussie World Trials in a time of 51.67, the 24-year-old decided to go ahead and journey to Budapest.

That left Simpson, who has restarted his swimming career after a successful run as a pop star, off the Worlds roster. Simpson placed 3rd at the Aussie Trials with a time of 51.96. Both men are slated to represent Australia here in Birmingham so we are anticipating a heated showdown.

Other contenders include England’s Jacob Peters, who swam a best time of 51.50 for 11th at the World Championships; South African Matthew Sates (though he might drop this event), and Canadian Finlay Knox, who is best known as an IM’er, but had a butterfly breakthrough earlier this year with a 51.86 in the 100 fly.

Whereas Guy is a little unpredictable in the 100m fly, the 26-year-old looks to be the man to beat in the 200m distance here in Birmingham. Guy punched a lifetime best in the 2fly semi-finals in Budapest, producing a result of 1:54.91 as his first time ever under the 1:55 threshold.

Riding that momentum into the World Championships final, Guy fired off a 53.37 opener, with only eventual World Record-setter Kristof Milak of Hungary going out faster. Guy paid the price on the back half and wound up placing 8th in a time of 1:55.54. Assuming Guy tries a different tactic in Birmingham in front of a home crowd, the Englishman is a very viable threat for gold.

Le Clos won’t let go easily, however. The reigning Commonwealth Games champion owns a season-best of 1:55.75 from his South African Trials and be right there in the mix this time around as well.

Aussie Bowen Gough logged a solid time of 1:56.49 at this year’s Australian Championships to add his name to the Commonwealth Games roster. The 24-year-old owns a lifetime best of 1:55.88 from last year and if he can perform up to that level, he could be looking at a minor medal at these Games.

And then there’s Scotland’s most decorated Olympian of all-time Duncan Scott. The versatile ace is aiming to improve upon his bronze medal-garnering performance of 1:56.60 from Glasgow.

Although this year was a little rocky, with Scott contracting COVID-19 and then having to drop out of Worlds because of training disruptions, the 25-year-old is hungry to haul away some hardware every time he enters the pool.

100fly: Not sure LeClos can turn back time sufficiently to podium unless this proves an unusually slow race. Otherwise, its hard to look past the trio of Liendo/Temple & Guy. On form, I lean slightly to Liendo but in reality, this is one where I’d hold off until I see how they’re actually swimming before putting down any $$

200fly: An event very light-on for quality and depth. Happy to go along with Guy winning and I think LeClos can still snagging a medal. Open book for bronze.

More like total ZZZZZZZZZZZ ……. which is what the majority of their fellow countrymen will be doing when this is being swum.

Good writeup. I went with Liendo over Temple just because Temple has seemed a bit off this year (a little off in fly and very off in free).

Liendo will race 50 fly too

I feel like Kyle going to Worlds will be advantageous to Cody. His goal was commies, and while having to go to worlds would’ve been nice, I feel like that could’ve hindered his original plans. Just having to focus one champs that is farther away will pay off well for him imo