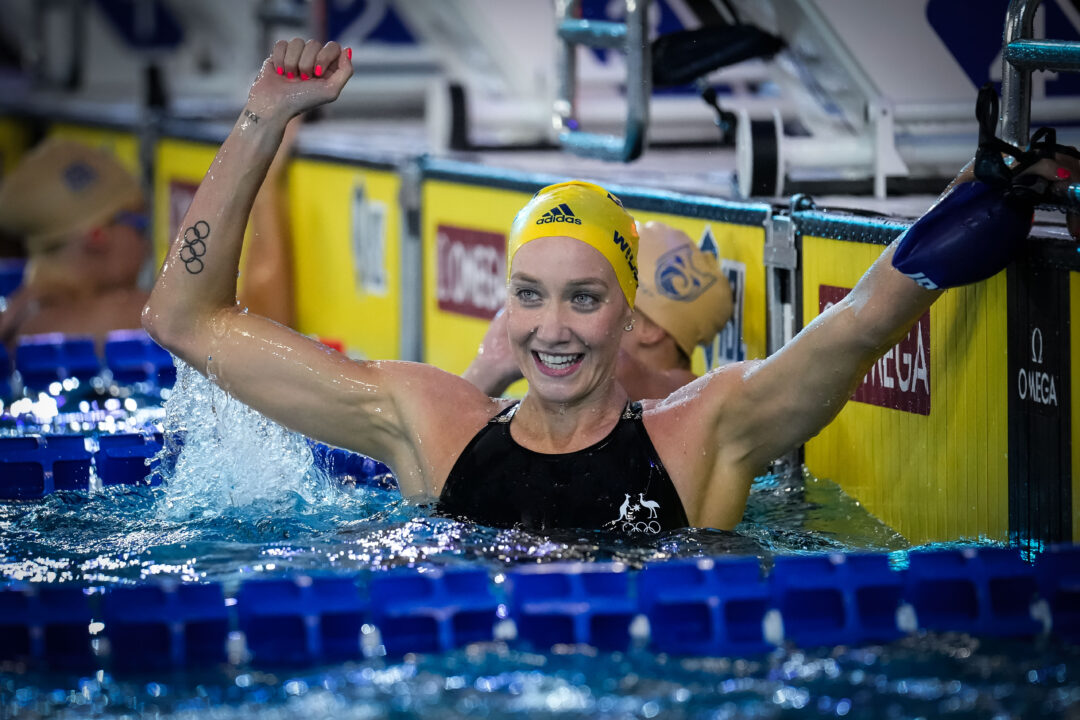 Based on the Aussie women's 200m freestyle finishes tonight in South Australia, they hold the title of 'favorite' entering next month's World Championships. Archive photo via Mike Lewis/Ola Vista Photography

Tonight we saw an inspiring performance by Ariarne Titmus in the women’s 200m freestyle at the 2022 Australian Swimming Championships.

The 21-year-old Dean Boxall–trained star pumped out a massive time of 1:53.31 to check in with the third-fastest 2free performance in history. The only swims that score higher are represented by now-retired Italian World Record Holder Federica Pellegrini‘s 1:52.98 World Record from 2009 and Titmus’ own 1:53.09 from last year’s national championships.

Looking at the bigger picture, Titmus led a slew of top-notch performances in tonight’s final, as on-fire 18-year-old Mollie O’Callaghan also turned some heads with yet another personal best.

The St. Peters Western ace got to the wall in a time of 1:54.94, a mark representing her first-ever 2free outing under the 1:55 threshold. Entering this meet O’Callgahan owned a personal best of 1:55.11 from the 2020 Olympic Games, so the teen managed to slice another .17 off of that time to snag silver.

Sliding into the third slot in the final was two-time Olympian Madi Wilson in 1:55.86, while 25-year-old Kiah Melverton claimed the fourth place spot in 1:55.94.

Collectively, the top four finishers tonight would produce a combined time of 7:40.05, a relay time that would result in a new World Record if swum together.

Even if we factor out Titmus, who will not swim at the World Championships, second through fifth at the Australian Trials would finish with a combined time of 7:42.84.

*Excluding Ariarne Titmus, who won’t swim at the World Championships

With these times, on paper, Australia holds a significant advantage over the United States.

China remains a very real threat, especially after Tang Muhan (1:54.26) and Yang Junxuan (1:54.48) posted a pair of scintillating times back in late September. But after China’s trials meet was called off, it’s difficult to know where they stand one month out from Worlds.

Can’t argue with those add-ups — the Aussies are definitely the ones to beat.
I thought the US Trials results in the W 200 Fr were underwhelming. Wondering why this is and if it’s just a statistical anomoly.

Am with the consensus on this one.

With Titmus (and employed correctly); it would certainly be Adv AUS.

Without her, they can certainly still win and may indeed do so but without her they haven’t the proven “gamechanger” and CHN has 2 sub 1.55s this calendar year. MOC could prove to be so but as yet it can only be conjecture.

I have it leaning slightly Adv CHN …. but would be delighted to be proven wrong

I define “gamechangers” as being those who can deliver the split that changes the complexion of the race; ie Titmus & Ledecky as 1.53 swimmers.

True, CHN does not necessarily possess one but they have a couple of 1.54 lows. With Titmus out, other than MOC at 1.54.9, you’re looking I.55highs. MOC could prove to be a gamechanger but as yet, it can only be conjecture.

You’re preaching to the choir.

China will be favourites but it will be an irony if a team without Titmus and McKeon wins in Budapest when it couldn’t in Tokyo. Australia still has enough depth to swim eight different swimmers. It is a good strategy – provided you know who your four fastest are. In Tokyo the Australian coaches made the mistake of putting Neale in the final when she had finished only a few hundredths of a second in front of O’Callaghan and Harris at the trials. A time trial should have settled it. The other dumb mistake made by the Australian coaches was thinking the race was won and putting Titmus on the opening leg to give her another crack at the world… Read more »

It might be tough to pick up 8 more bronze medals without Titmus and McKeon. It’ll be interesting to see if they can pull it off though.

I get the joke but this group is literally faster than Tokyo without them. Given the USA’s 4×200 has fallen apart I’ll be shocked if Australia doesn’t get silver at least

I agree. I hate saying it, but I think Australia, China, and Canada will be ahead of USA.

Fallen apart is an understatement. It’s a debacle of epic proportions.

This relay is far fom a sure thing without Arnie and even with her we saw what happened at the Olympics. China has a good chance to repeat their gold but really no one knows what kind of shape they’re in.

With Arnie they have WR potential but you’d have to think some of them will be feeling the effects of too many tapers by Comm Games.

We thought this last year then look what happened at the olympics still think China is a really strong contender for gold and the USA will only improve off those times Ledecky is 1:53 potential after all