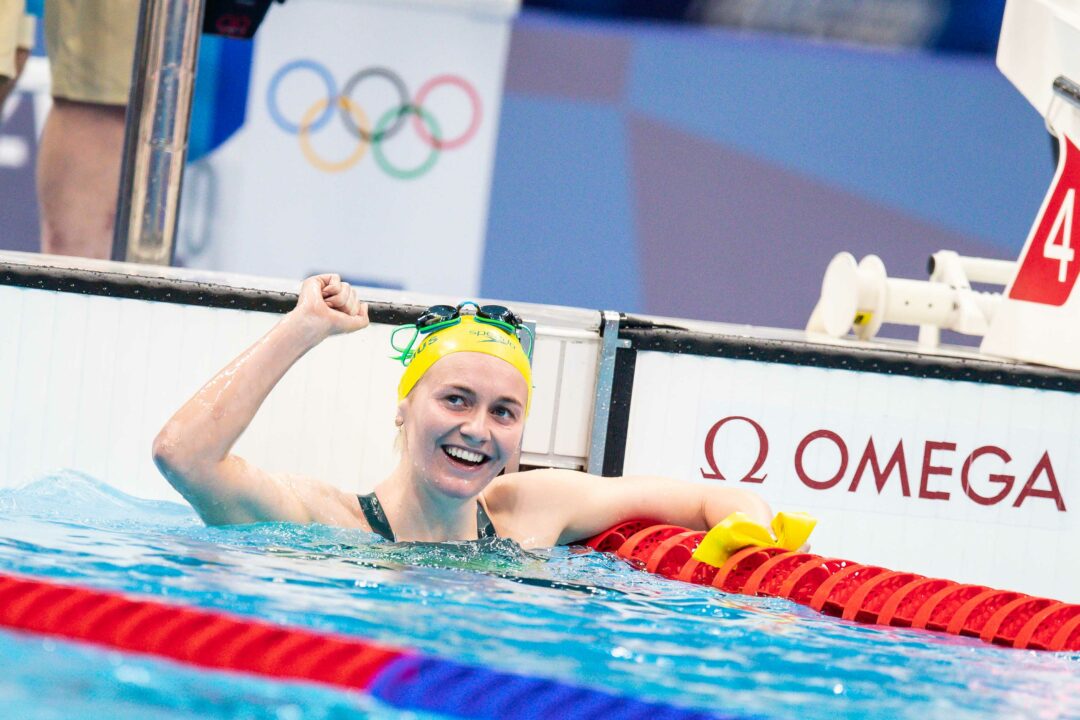 Titmus continues to distance herself from the pack and establish herself as the bonafide number one female mid-distance freestyler in the world. Archive photo via Jack Spitser/Spitser Photography

Ariarne Titmus continues to distance herself from the pack in the conversation of who the best middle-distance female freestyler in the world is.

Competing at the Australian Swimming Championships on Friday night, Titmus delivered a flawless swim en route to winning the women’s 200 freestyle in 1:53.31, a time that stands up as the third-fastest in history.

The clocking falls just over two-tenths shy of Titmus’ Commonwealth, Australian and textile world record of 1:53.09, set at the Aussie Olympic Trials last June, and gives her three of the four-fastest swims of all-time.

Italian legend Federica Pellegrini owns the world record at 1:52.98—set at the 2009 World Championships in the now-banned “super-suits”—but beyond that, no one has been better in this event than Titmus.

The 21-year-old now owns five of the 12-fastest swims ever.

Titmus was actually under her Australian Record pace over the first 150 of the race tonight, and still managed to close quicker than she did when she won Olympic gold last summer in 1:53.50. This is the first time she’s opened up sub-27 and kept the remaining 50s all under 29 seconds.

The entire ‘A’ final ended up being faster than the second-fastest swimmer at the American Trials late last month. Eighth-place in South Australia was 1:56.82, while the runner-up in Greensboro was 1:57.08.

Titmus has said that she won’t race at the 2022 World Championships next month, but instead will gear her focus toward the Commonwealth Games later in the summer.

O’Callaghan’s showing here would’ve immediately made her a medal contender regardless, but in Titmus’ absence, the race in Budapest is somewhat wide open behind favorite Siobhan Haughey, especially with Katie Ledecky dropping the event from her schedule.

Titmus takes over the top spot in the 2021-22 world rankings, while O’Callaghan sits fifth, but is fastest in 2022 among swimmers who will compete in Budapest.

Titmus also raced the 100 free earlier in the meet, placing fifth in a personal best time of 53.68, and will take on the 400 free on Sunday.

In that race, the reigning Olympic champion is also the second-fastest swimmer in history, with her 3:56.69 PB trailing only Ledecky’s 3:56.46. Could a world record be in store?

It’s available on prime video if you have Amazon prime

Are you sure that time is right? SwimSwam commenters have been saying for months that Titmus is skipping worlds because she’s unprepared and can’t compete with the big dogs.

Wait… could it be that the SS commenters are WRONG!? Lol

No we said she should compete because she can just show up and podium in all her events. Its looks like she easily would win the 200 and 400 probably silver at worst and likely gold. There is no reason for her not to go.

In her interview, she said she just wanted to concentrate on one meet this year. It’s pretty easy to comprehend Taa. The last few years have been a lot. Look at athletes like Manuel and Biles – mental health issues, overtraining etc – all things that athletes like Titmus are trying to avoid. I think she knows what is best for her.

That’s not what I read lol.

You’re not her employer and you don’t pay her bills. She can do whatever she likes. Your opinion that she should go is meaningless

Thank you for sharing!

Thank you. For some reason usaswimming database ignores this remarkable achievement that would be #10 all-time best performance in this event.

Tang was a 1:55.00 relay split in Tokyo. She didn’t swim the individual; the 1:57 is from leading off the prelims relay.

I already corrected him on this before.

I didn’t expect sub-1:54 from Titmus in this meet, until she swam 53.68 in the 100. That seemed like a warm up for taking a crack at the 200 record. I mentioned in the preview thread yesterday that she should go for it, given it came before the 400 this time. Like Ledecky I think Titmus’ best chance at a special time is the first big specialty event on her docket. I wouldn’t expect anything well below 4 minutes in the 400. And I don’t believe she’ll threaten the records at Commonwealth. That seems like a friendly gathering that the athletes really look forward to, more than a world record showcase. Good but not great times.

You obviously know nothing about comm games

Comm games is huge for sponsorship reasons, but athletes now that the meet itself is a second tier one.

I had a friend who made the team in 2014, and she was much, much happier about qualifying for panpacs

hope the plexiglass walls are ok.

That split consistency bodes well for later this summer. My money is on that WR going down.

Her race today and the final race in Tokyo look very similar (shape of the splits curve) and are so different from 1:53.09. If the strategy is not changed she won’t find this 0.34sec of improvement.

The race strategy was more similar to her PB than the Tokyo race but the final 50 was slower.

I corrected you on this before but can repeat it again 😀
There are four distinctive split curves for 1:53 swimmers.
Haughey – “fly- and- die”
Schmitt, Ledecky,
Sjostrom (1:54.08), Titmus (1:53.5, 1:53.3) – like a long distance
Pellegrini, Titmus (1:53.09)
Just draw it in Excel to see what I mean.
I believe that Thorpe recommended Schmitt-Ledecky strategy, but I may misunderstood what he said.

Hopefully she breaks the record at Commies