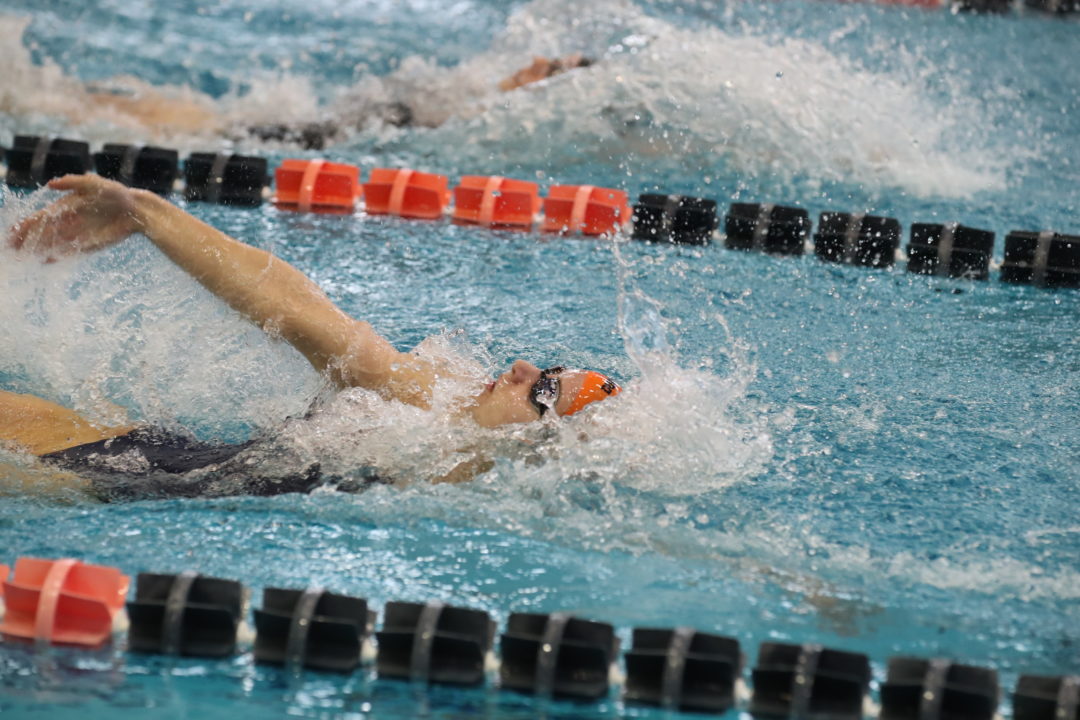 The 400 medley relay is seeded to be a very tight race at the top, with the 4 top seeds all entering at 3:26. Stock photo via UVA Media Relations

The 400 medley relay is seeded to be a very tight race at the top, with the 4 top seeds all entering at 3:26. As is the case in all 5 relays this year, UVA is the top seed, and is such by .45 seconds in this relay.

UVA is the top seed, and our pick to win the event, although there will be plenty of competition. At ACCs, UVA was led off by Alex Walsh in 51.57, then Alexis Wenger split 57.56 on breast, Alexa Cuomo was 50.46 on fly, and Kate Douglass anchored in 46.66.

Believe it or not, there’s still a bit of room for improvement for this squad. Walsh’s 51.5 lead-off was off her personal best 100 back of 50.88. If Walsh can swim down near her best time, or swim a best time, at NCAAs, this relay is at a minimum a half-second faster. Also, even though Douglass’ 46.66 anchor split is elite, and she will be the fastest freestyler in the 400 medley field, her lifetime best flat-start 100 free is 46.83, indicating she could be a little bit faster anchoring the relay this time around. UVA is entered at 3:26.25, and if Walsh and Douglass are indeed faster this time around, and Wenger and Cuomo hold their splits, they could ultimately be threatening the 3:25.09 NCAA Record. However, UVA does have one disadvantage compared to the other top 4 teams. All 4 members of the relay are racing individually on day 2, and all but Wenger are also on the 200 free relay. With the 400 medley at the end of the session, UVA’s squad may not be as fresh as the other teams.

The path to victory for UVA isn’t completely clear, however, as there are 3 other teams seeded within .63 seconds of them. Cal is seeded 2nd at 3:26.70, which they swam a Pac-12s. Isabelle Stadden led Cal off in 50.86, a lifetime best, with Ema Rajic splitting 57.68 on breast, Izzy Ivey splitting 50.44 on fly, and Emily Gantriis anchoring in 47.72. Unlike UVA, there aren’t any glaring areas of improvement for this Cal relay. However, Ivey isn’t racing individually on day 2 of the meet, and will instead most likely be racing on the 200 free and 400 medley relays at beginning and end of the session. This could leave Ivey a little more fresh for the 400 medley, as she won’t have to race in prelims, and will have plenty of rest between the relays.

Texas is the 3rd seed at 3:26.86, which they actually swam the the Texas Hall of Fame Invite in December. Julia Cook led that relay off in 51.15, with Anna Elendt splitting 57.83 on breast, Olivia Bray clocking a 50.33 fly split, and Kelly Pash anchoring in 47.55. Texas is another case where there’s clear room for improvement from their season best. Firstly, Olivia Bray‘s 50.33 fly split is slower than her personal best. Bray has a best time of 50.19 in the 100 fly, so if she’s on form in the relay, it’s possible we see a sub-50 split from her. Also, Pash’s 47.55 split on this relay is a couple tenths of a second slower than her season best flying 100 free split of 47.27. Elendt’s personal best 100 breast is 58.06, which seemingly leaves a little bit of room for her to improve on the 57.83 flying split as well. Also, it’s worth noting that Pash is the only member of this Texas relay that will be racing individually on day 2, leaving the other 3 swimmers fresh for the relay.

NC State is the 4th seed, rounding out the fastest heat of 4 teams. They enter the meet with a 3:26.88, which they swam at ACCs, head-to-head with UVA. Katharine Berkoff led the Wolfpack off in 50.55, with Sophie Hansson splitting 57.98 on breast, Kylee Alons posting a 50.21 fly split, and Heather Maccausland (who has scratched the meet) anchoring in 48.16. This relay has clear room for improvement as well. Hansson is the 2nd seed in the individual 100 breast with her season best of 57.45, far faster than her 57.98 flying split. If Hansson is in top form on this relay, we should see her pushing the 57.00 mark, which would be an enormous advantage for NC State following Berkoff’s backstroke leg, and leading into Alons’ fly. Alons’ fly split at ACCs was the fastest fly split out of all the conference meets this year, and she’ll need to be at least as fast this week to give NC State a shot.

It’s going to come down to the anchor for the Wolfpack, as Maccausland’s 48.1 already lagged behind the rest of the freestylers in the fastest heat, and with her scratching the meet, they’ll have to dig even deeper into their bench. That being said, if Berkoff, Hansson, and Alons can build up a significant lead, anything is possible in this field. With Maccausland out of the meet, the most likely candidates to fill her spot on the anchor seem to be Julia Poole, Abigail Arens, or relay-only swimmer Sirena Rowe.

Darkhorse – Stanford: Stanford is seeded 10th in the event with their season best of 3:30.08, which they swam at Pac-12s. Stanford is out darkhorse pick for a few reasons. Firstly, Stanford has a history of performing well at NCAAs during Greg Meehan’s tenure as head coach of the team. Secondly, Stanford used senior Lauren Green on the anchor at Pac-12s, where she split 48.79. Green has a personal best flat-start 100 free of 48.78, indicating she could provide a significantly faster split this time around.

“Firstly, Stanford has a history of performing well at NCAAs during Greg Meehan’s tenure as head coach of the team.”

Greg is a great coach – but this is something Stanford has really struggled with. Many swimmers always peak at PAC12’s and add at NCAAs.

If only there were some data available to settle this argument.

Many swimmers, such as Janet Hu and even Ledecky herself have peaked at PAC12s. They improve their “seeds” at NCAAs, mainly due to other teams lowering there. In terms of time improvements from PAC12s—>NCAAs… little to none. Much evidence to support that as well…

Ok… Looking at some of these numbers (Just the very top end from last few years), I would not agree with the claim that Stanford has “struggled” with performing at NCAAs.

ALL of those same swimmers have gone lifetime bests in focus events at NCAA Championships, including NCAA & US Open records from Eastin (2/4IM), Ledecky (500fr), and Manuel (100 fr).

To me all that says is that they go fast at both meets. Sometimes they add, sometimes they drop. To me, that’s not… Read more »

Here are some various pieces of evidence to support my claim and also challenge your claims:

I included some “big names” and some other swimmers on the team to provide a wide variety and to give some context.

When you manipulate numbers you lose credibility. In this case you are using the fastest times from PAC-12’s and the slowest times from NCAA’s. You chose not to list Pitzer and Hu’s fastest swims from each NCAA meet.

No numbers have been “manipulated”. All best times are listed as much, and all other times are taken from respective “finals session” swims. Preliminary times were very similar, either slightly faster or slightly slower.

Not saying Stanford doesn’t perform – they clearly do winning 3x championships in a row. I’m just saying that in history, they do tend to peak at PAC-12’s rather than NCAAs. Not saying they all always perform BAD at NCAAs, just saying that a lot of the swimmers breakout at PAC-12s and stagnate slightly at NCAAs – still doing enough to win the national title though, granted. Stanford obviously did what they needed to do to win their titles. I respect that, obviously. I was… Read more »

Ok, so those are some numbers, agreed. Here are some more number from those same seasons:

So although she gained in her 500 from conference, she was essentially the same in 200 and significantly better in the 100. Also, this was her freshman season, worth noting that she’d never had this turnaround before.

I would disagree with 2019. They were clearly favored to win and did not dominate as predicted. Cal came very close to upsetting them.

Guess we have different perspectives on that. They were seeded 3 points ahead of Cal and won by 37.5. They won 3 event titles after losing KATIE LEDECKY and SIMONE MANUEL.

Cal had a really fantastic meet. I agree with that. But that doesn’t mean Stanford swam poorly.

I know this sounds absurd, but there’s an argument to be made that A.Walsh shouldn’t even make the 400MR. Freshman Tiltmann actually beat her (granted by a couple hundreths) in the 100 back at ACCs. Wenger is clearly doing breast (and BTW – ACC split was only 0.1 faster than her flat start, so more room to improve) — and Cuomo swam so well in fly, that it’s unclear whether it would be an improvement to put Douglass in fly and Walsh in free. All in all, it shows the remarkable depth and versatility of UVA to say that AWalsh might not have a spot on that relay. Then again, she might not even have been fully rested at ACCs,… Read more »

Yeah I’ve been thinking the same thing too, though holding out Walsh in the 400 medley relay may be more about keeping her from overtaxing herself with two whole days still to go. Not a problem for Douglass, who is just in the 50 free individually to do both relays, but for Walsh with the 200 IM it could be a concern.

Seems ridiculous to shake up a relay which just set the American record, but using Walsh in the 200 medley the next day should make them a little faster, on paper at least. Move Douglass to fly, and Walsh to free, which they’ve already done this year at the Tenn/Alabama rest meet.

I know re 200MR. I think that’s one spot where for team morale, you don’t remove the senior who swam a very solid leadoff leg of the 200MR that set the AR. You might consider going Douglass/Walsh on the back half. But Cuomo has been incredible. It’s an embarrassment of riches.

NC State is also dangerous here – I think this relay along with the 200FR relay are their best chances at a relay title.