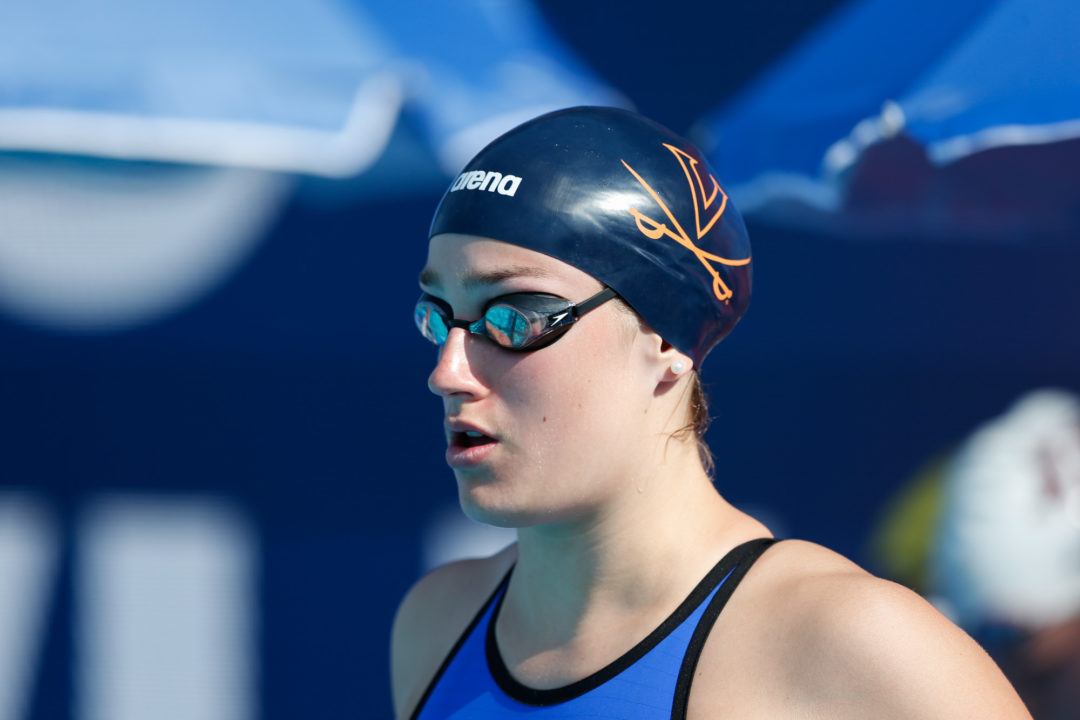 With Ivey, Cal looks incredibly strong for the 800 free relay crown. Without Ivey, though, Virginia could run away with this. Current photo via Tim Binning/TheSwimPictures.com

Heavy hitters Paige Madden and Alex Walsh for Virginia, and (potentially) Isabel Ivey and Robin Neumann for Cal, will lead these top teams on night one of NCAAs. Madden, Walsh and Neumann will vie for the individual 200 free title later in the meet, and this meet will be a preview, of sorts, for the field in general.

For Cal, the wrinkle will be if Ivey swims this relay; she led off Cal’s exhibitioned B relay at 2021 Pac-12s in 1:43.11, a lifetime best, but swam the other four relays at that meet officially. Because NCAA rules limit a swimmer to 7 total events, and because it probably wouldn’t be the best points decision to pull her from an individual event, that means Ivey will have to sit out somewhere.

Ivey’s freestyle has looked better than ever this year, as she’s hit lifetime bests in the 50/100/200 this season, and having her on the relay would give Cal the edge here. At Pac-12s, Neumann led off in 1:43.19 and Alicia Wilson was 1:43.97 on the end, with 1:44 splits in the middle from Ayla Spitz and Rachel Klinker. Even without Ivey, that’s a squad that could reckon with Virginia as it is, but Ivey being on it would bring their time down by probably close to two seconds.

Without Ivey, though, Virginia could run away with this. Madden, Walsh and Nelson were all very strong splits at ACCs, and it’ll be tougher for Cal without another big split to join Neumann and Wilson.

Aside from the race up top, six teams are bunched up under seven minutes, between 6:58 and 6:59.

Texas and NC State sit third (6:58.42) and fourth (6:58.48), respectively. The Longhorns have one of the strongest 200 freestylers in the country, sophomore Kelly Pash, who dropped a lifetime best 1:42.70 at Big 12s leading them off in the 800 free relay. Julia Cook was 1:44.73 on the anchor, while Olivia Bray and Evie Pfeifer were 1:45s on the middle. Pfeifer went 1:43.77 leading off this relay at mid-season, though, which brings Texas closer to a 6:56 or even faster with a flying start. While Texas hasn’t traditionally performed superbly across the board at NCAAs, this relay dropped three seconds from seed in 2019, and the Pash/Pfeifer duo looks good to propel them to a top-five finish.

Kentucky, Stanford and Florida are the next three down, all at 6:58s. Kentucky has one of just four women to have been under 1:43 this year, junior Riley Gaines (1:42.70), the SEC champion in the individual 200 free. Gaines split a 1:42.4 on Kentucky’s title-winning relay at SECs, but she’s their best by a longshot; nobody else was under 1:45 on that relay at SECs, so the supporting cast will need to split 1:44s to keep a top-five finish hope alive.

Stanford won this in 2019 with a 1:39 split from Taylor Ruck, but they only return one swimmer from that relay, Brooke Forde. Forde’s split 1:41 before, so that’s a huge leg, and they should get at least a 1:43 or so from Morgan Tankersley. Then there’s Allie Raab, who’s been 1:45 twice this year with a flat start. Lauren Pitzer was 1:46-plus anchoring them at Pac-12s, and she’s been much quicker in the past, so this relay could definitely shave off a couple seconds and make things interesting.

Florida’s been stronger this year with Talia Bates improving in the 200 free and the addition of NC State transfer Katie Mack, and Bates’ 1:43.38 season and lifetime best is their big split. Mack was 1:44-high at SECs on the second leg as Nikki Miller and Kathleen Golding followed with 1:45s.

Georgia is seeded eighth at 6:59.42, the only other program to go under seven minutes. Courtney Harnish went 1:42.96 leading off their relay at SECs, while breaststroker/IMer Zoie Hartman dropped a 1:43.54. Their middle legs were 1:46s, though, and they’re going to need more from them to stick within the top-eight.

The strongest team with a seed time over seven minutes is Alabama, packing a 1-2 punch with Morgan Scott and Cora Dupre, who both have lifetime bests in the 1:43 range. Their seed time is a bit deceiving; at 7:01.36, they didn’t use Dupre at SECs, and Scott’s 1:43.69 lifetime best lead-off was followed by Kalia Antoniou (1:45.02), freshman Gracie Felner (1:45.82) and distance specialist Kensey McMahon (1:46.83). Dupre was on the end of Alabama’s 200 medley relay at SECs, with Scott on fly, while sprinters Antoniou and Flora Molnar were not on that 200 medley; there are several ways to switch people around, but two options make the most sense.

One is just swapping Dupre’s medley anchor with Antoniou’s second 800 free relay leg, which would probably make both relays faster as Antoniou’s been 21.6 flat-start this year and Dupre anchored the medley in 21.5 with a flying start. Dupre would in turn make the 800 free relay at least a second and change quicker, but she could potentially drop them two seconds or more.

The other option is to replace Dupre’s medley anchor with Molnar, who was 22.2 with a flying start at SECs but was 22.1 to the feet going out in the 400 free relay (she split a 47-plus). Then, Dupre replaces McMahon, not Antoniou, on the 800 free relay, which could give the 800 relay three and maybe even four seconds of a drop while only costing the medley a few tenths so long as Molnar can go a 21-high, which seems doable.

If the Crimson Tide doesn’t make any personnel changes on the 800 relay, though, then Georgia looks solid to nab a top-eight finish.

All told, this still looks like a UVA-Cal battle up top, while the handful of sub-7:00 relays will try to hold taper and rely on heavy hitters to split 1:43 or better and keep them in contention for a top-eight finish. A swimmer being flat at a big meet might only cost a couple of tenths in a 50, but in a 200, that could balloon to two-plus seconds, so some teams might rise a bit while others could sharply fall.

Darkhorse – Tennessee: The Lady Vols were 7:02.41 at SECs, and they were 18th at the 2019 NCAA Champs, but they were the nation’s top performers last season. Tjasa Pintar had a major 1:42.9 anchor leg at SECs, while the rest of the relay was 1:46s. Abby Samansky has been 1:45.8 flat-start, though, and Trude Rothrock‘s been 1:46.0, so those two have more to drop. Claire Nguyen was 1:46.81 on the second leg, which is almost a second better than her flat-start best. Of course, they could drop time and still not place top-eight, but there’s a chance they’d put it all together and make a run at it.

Nobody is touching the NCAA and American records for years. That relay was stacked with incredible talent.

safest prediction of the meet

Sure hope the LADY VOLS will improve off their SEC meet which has not been the case over recent years, IF they do they could finish top ten in the meet!