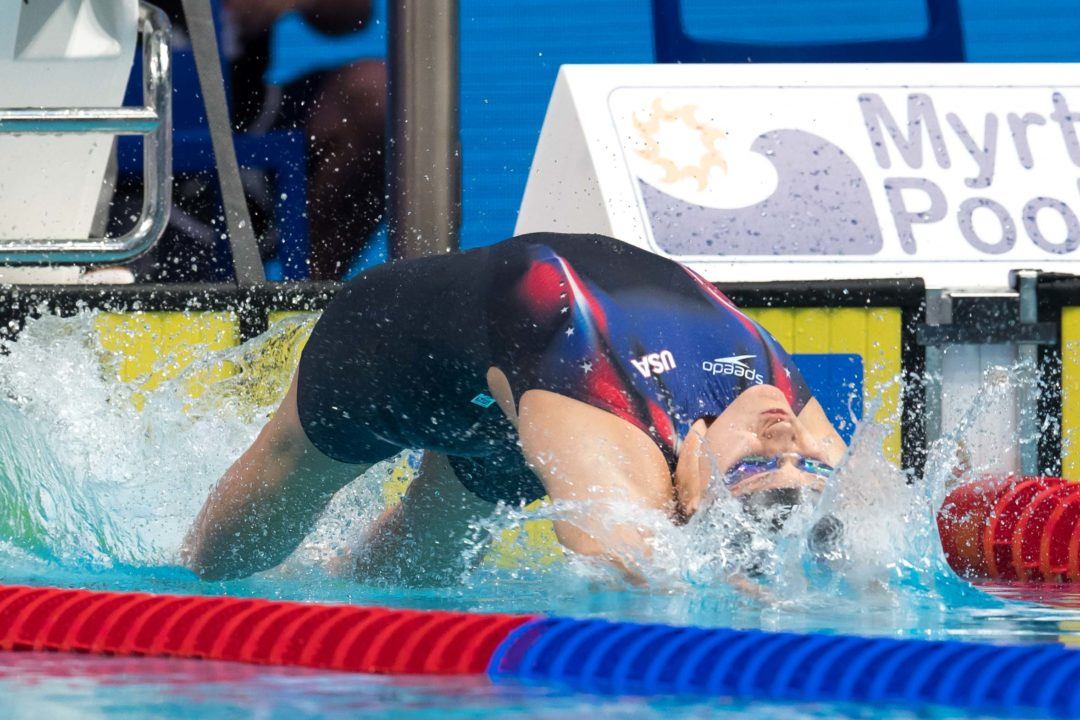 Read up on the top 5 storylines to watch at PSS Des Moines, featuring Regan Smith/Kathleen Baker/Olivia Smoliga's first 100 back battle of the year. Stock photo via Mike Lewis/Ola Vista Photography

While NCAA/HS swimming is firing up with upcoming championships, the racing stakes are also going to be blazing in Des Moines for more Pro Swim Series action this week. With Olympic Trials now nearly 3 months away, here are the top 5 storylines to watch for round 3 of the 2020 Pro Swim Series in Des Moines.

After losing to 2016 co-Olympic champion Penny Oleksiak of Canada in her 2020 debut, American Simone Manuel will now face another international sprint star, Hong Kong’s Siobhan Haughey. In Knoxville, Manuel placed second to Oleksiak in the 100 free. So far this season, Haughey’s season best (53.33) leads Manuel’s SB (53.44) by 0.11s in the world rankings.

At the 2019 World Championships, Haughey parlayed her success in the NCAA into the elite international scene with a 4th-place finish in the 200 free. She then became a sensation for the ISL’s DC Trident, going undefeated in the 200 SCM free.

Olympian and World Championships runner-up Hali Flickinger and teen backstroke specialist Regan Smith are scheduled to face-off in the 200 fly this weekend. At the Knoxville PSS, Flickinger (2:08.34) edged out Smith (2:08.73) by half a second. While Smith’s season best hails from that Knoxville meet, Flickinger’s world #2 time of 2:07.65 was set at the US Open in December 2019.

Flickinger currently is the fastest American women this season in the 200 fly by a full second, with Worlds bronze medalist Katie Drabot (2:08.34) and Olivia Carter (2:08.58) filling in the next 2 US spots (neither will be at this meet as they prepare for the NCAA Championships). Smith is best known as a backstroker after breaking World Records in the 100 and 200 meter races, but is also the 4th-fastest flyer in the US this season. That, along with her 15-16 SCY NAG and 2019 US National title, are two solid accolades that give her a shot at making the Olympic team in the 200 fly too, if she chooses to swim it.

Lilly King‘s season best of 1:05.65 in the 100 breaststroke currently is the only time in the World under 1:06 this season. She’s the defending Olympic Champion and two-time World Champion, and the World Record holder, poising her for another PSS title.

In the race for second, both this weekend in Des Moines as well as this summer in Omaha, will be 2020 World #4 Pan Ams medalist Annie Lazor and 2020 World #9 Olympian Molly Hannis.

However, at the upcoming Olympic Trials, only two women can represent the US in the 100 breast. Looking at last year’s PSS season, Lazor looks to be in the best position to accompany King in Tokyo. Hannis, on the other hand, earned her Olympic rings in 2016, but in the 200 race.

The top three US women in this event (King, Lazor, Hannis) are well-known for their strong finishes, making the US women’s 100 breast one of the most competitive events to keep an eye on in Omaha. Worlds medalist Bethany Galat (1:07.46) will also be a contender both in Des Moines and Omaha.

It will be another clash of the titans, this time in the 200 IM, which projects to be one of the best races of this summer’s domestic schedule. Worlds medalist Chase Kalisz leads the sprint IM event with his 2020 World #5 time of 1:57.28 from the 2019 US Open. Kalisz has been quiet this LCM season after taking bronze in the 200 IM and missing the 400 IM final at the 2019 Worlds meet.

Coming in for the next fastest American in Des Moines is 4-time Olympian Ryan Lochte, sliding in for 11th in the world at 1:58.89. Lochte’s 2016-2020 Olympic quad has been an uphill, serving two suspensions that kept him from 2017 and 2018 competitions. However, Lochte kept his sights forward, achieving a redemptive 2019 US National title in the 200 IM.

While BR/IM specialist Josh Prenot and teen Carson Foster will not contest in the 200 IM in Des Moines, versatile sprint star Michael Andrew (SB 1:59.02) and FR/FL specialist Caeleb Dressel (SB/LTB 1:59.97) come in as the next top IM contenders. While Dressel’s season best just misses the World Top 25 (and won’t likely swim it at Trials), he still remains the fastest 200 IM SCY performer in history.

Previewing the race, Andrew and Dressel will take major advantage of early speed in the front half of the IM. As per usual, Kalisz should dramatically accelerate in the breaststroke leg and gain ground after the fly/back. However, because of Kalisz’s unique strategy to that of his other competitors makes him poised to take the title.

Dressel, who was an ISL skins star, can usually hold on for close finishes, setting himself up for a great race against Kalisz. Veteran Lochte, who has internationally raced this event since 2004, progressively builds speed throughout the race, with his back/breast legs being the most crucial for the 35-year-old. Andrew practically trains for the 200 IM with his versatile sprint training but still struggles with lactate control on the freestyle leg.

This will be a chance for some of the biggest names to respond to races over the weekend at other meets. Sam Stewart recently put up a 1:57.76 at the College Station Sectional meet on March 1st, ranking him 8th in the World, right behind US teen Foster (1:57.59). Foster, meanwhile, swam 1:58s on back-to-back nights while testing his Olympic Trials preparedness at a meet in Ohio.

If you thought the women’s 100 breast will be competitive in Omaha, just wait until the 100 back. Des Moines’ lineup includes both 2016 Olympians in the event Olivia Smoliga and Kathleen Baker, along with the current world record-holder Regan Smith, who is only a teenager.

So far this season, Smith comes in as the top 100 backstroker in the world with her PSS record of 58.26 in Knoxville. At the 2019 US Open, however, Smith settled for second behind fellow teen Phoebe Bacon (58.63), who is not present in Des Moines. In the US rankings, Bacon is currently 2nd in the nation behind Smith.

The next fastest-American woman based on season ranks in Des Moines is Smoliga with her 59.60 season best from the 2019 US Open, her only LCM meet this season. When competing with the ISL’s Cali Condors, Smoliga has a lethal asset to the squad, setting herself up as a FR/BK sprint star in the league. During last year’s PSS season, Smoliga set her lifetime best with her then-PSS record of 58.73.

Kathleen Baker, on the other hand, has yet to break 1:00 this season, coming in at 1:00.03 in a meet in Nice, France earlier this year/ While in Nice, Baker blasted a World #3 time of 2:08.75 in the 200 IM, pointing towards a training focus away from backstroke. Baker’s lifetime best still remains at 58.00 (a former World Record), but she has not touched that time since 2018 US Nationals. Her season best from 2019 was just 59.03, which she swam at that year’s World championships.

Top Names to Watch – By Event

Top names were hand-selected based on seed time and 2019-2020 season performance thus far in each event to point out potential high-class races and individuals in Des Moines.

Excited to see McLaughlin swim too. Competition’s going to be tough in 100 fly and 200 fr for trials (and, well, mostly everywhere) but gunning for her!

80% of recommended races to watch are on women’s side…
80% of comments on this forum are about men’s swimming. Does Swimswam care about equality?
It is long due to start the movement similar to the one of national women soccer team.
We are living at existing time of variety of movements in political, social and sport life. Let’s start another one here 😀 😀

this guy’s comments… i tell ya

What are you doing dude

Not just this article but all the time! Pull up the day to day recaps of the SEC championships. 50% races and published commentary were about the women. 80% or more of the comments posted were only about the men’s performances. My guess – commenters about men do not have anything better to do while those interested in women’s peformances have lives!

Or men’s performances are more exciting than women’s?

You were the 4th commenter on this article. Literally 1 word in the comments about a male swimmer when you posted.

i officially declare this comment funny. but do i mean funny: “ha ha” or funny: strange ..?