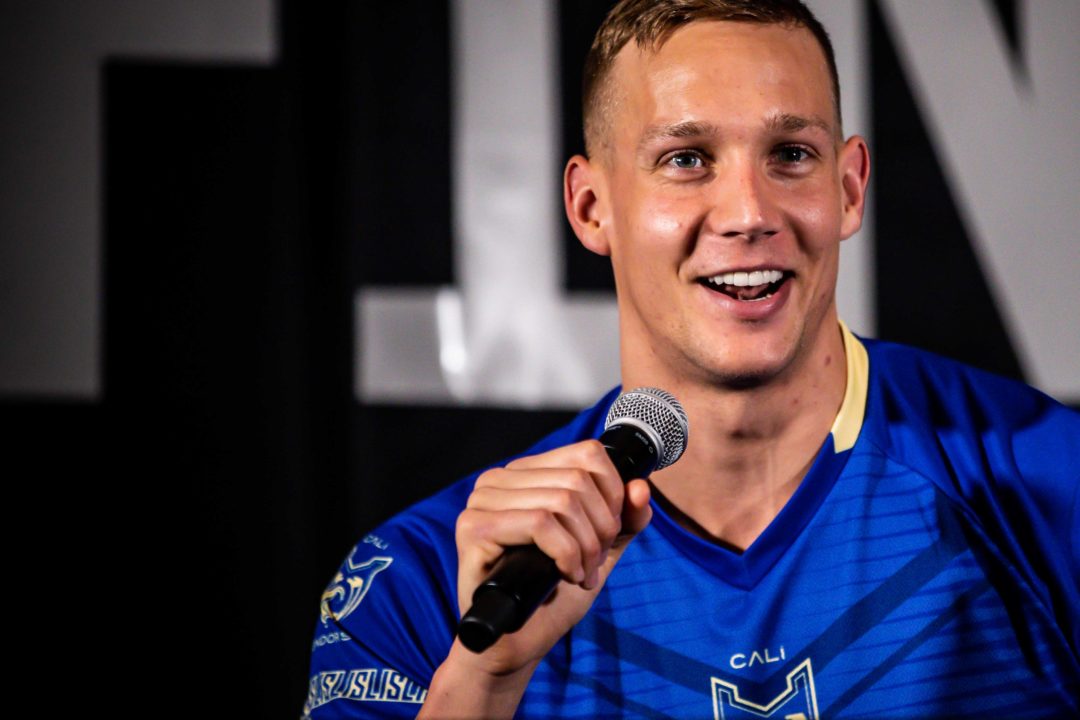 The 3rd Pro Swim Series meet of the 2019-2020 swim series is set to take place this week in Des Moines, Iowa. Initial pre-scratch psych sheets for the meet have been released. Star sprinter Caeleb Dressel is entered in 8 events. In addition to his traditional focus races (50 free/100 free/100 fly), in which he’s the American Record holder and even the World Record holder in the 100 fly, Dressel has placed entries in the 100 back, 100 breast, 200 free, 200 fly, and 200 IM.

Dressel is the American Record holder in the yards version of the 200 IM and was at one time the American Record holder in the yards 100 breast, but we’ve never really seen him swim those events at a long course focus meet. He’s already swum a lifetime best in the 200 IM this season with a 1:59.97 at the U.S. Open in December. The 200 fly isn’t an event he swims too often, but he raced to a lifetime best 1:56.29 last year.

On the women’s side, reigning World Champion Simone Manuel is entered in her traditional events: the 50 free, 100 free, and 200 free. She’s also entered in the 100 fly and 100 back. She swam those events in the Pro Swim Series at Knoxville and Greensboro this season.

World Record holder Regan Smith returns after taking down a pair of PSS Records in Knoxville. She’s got another packed schedule and will go after her record in the 100 and 200 backstrokes. Smith will also swim the 100 free, 100 fly, 200 fly, and 200 IM. Smith set the 17-18 NAG Record in the 100 fly in Knoxville. Katie McLaughlin, whose record she broke, will also be at this meet.

Excited to see him swim a (hopefully) full line up, the lead up to Budapest I feel like we saw him in a lot of 200 breast, fly, and IMs at the pro swims along with the 4

I don’t see chase in the 4im like is stated in the article?!?

Even if he did swim it would be a slow time

We all know dressel is gonna scratch

He doesn’t like swimming I on his back so probably.

You’re in the wrong thread, this is the one where we all say Dressel will make the Olympic team in 2 fly and 100 breast

and the 10k open water

He can almost beat Ledeckey in the 400 free, so you should throw in the women’s 400 free, too. He’ll be ripe by Tokyo.

Do you ever get tired of hitting the same notes over and over again?

Let’s criticize Paltrinieri for not beating Sjostrom or C1 in a 100… The stick up your tail for all things Dressel is so lazy and repetitive.

No. I’m just getting warmed up for Trials. And get the stick out of your own tail over Paltrinieri, fanboy. Unlike your hero/relative/whatever, he’s actually won an individual Olympic gold.

Relays are a thing

Just make the Olympic team? I thought he was going to beat Peaty. At least that’s what I kept hearing after his 50 in the 100 SCY breast.

Not Peaty but King