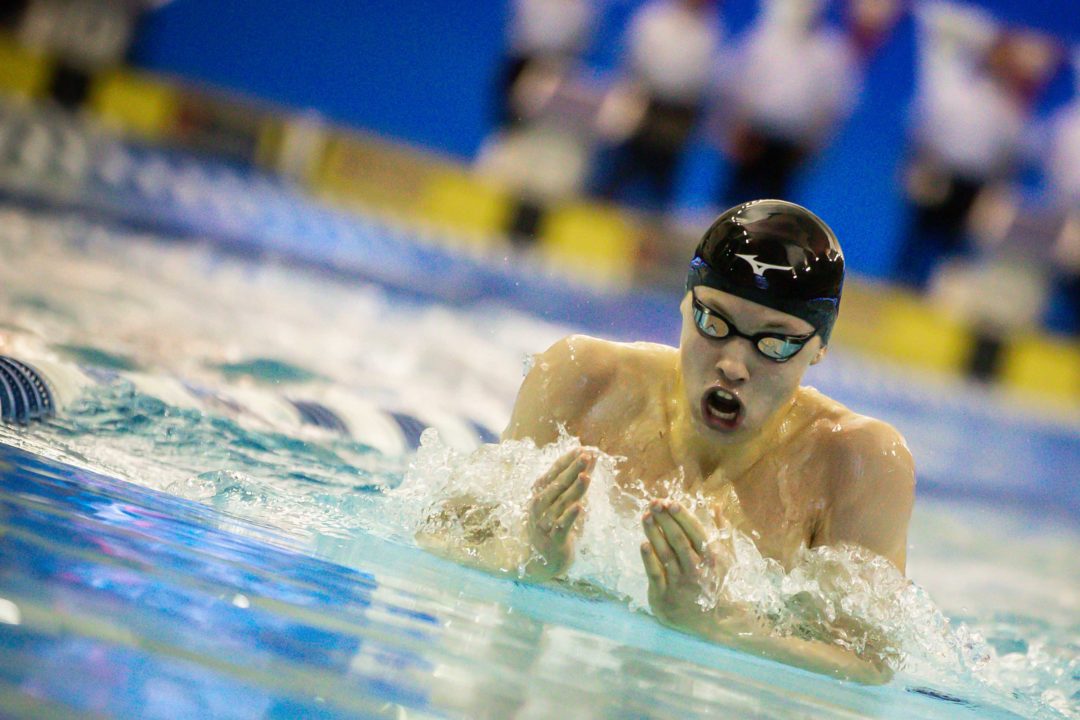 Carson Foster finished off his Olympic Trials simulation in the 200 IM on Saturday night with another 1:58. Archive photo via Jack Spitser/Spitser Photography

Carson Foster completed his pre-Olympic Trials experiment on Saturday evening with a 1:58.74 in the 200 IM. That shaved a few hundredths off the 1:58.83 that he swam on Friday evening.

This was the 3rd round of Foster’s planned test this weekend of a three-round prelims-semifinals-finals format ahead of this summer’s U.S. Olympic Trials. With very few meets offering the opportunity to swim 3 rounds of an event on this timing, Foster swam prelims and finals of the 200 IM on Friday, and then used the ‘finals’ of the 200 fly on Saturday to simulate the next-day ‘finals’ he would face in Omaha to qualify for the Olympic Team.

The time won’t officially count (since it was the 200 fly final, he was disqualified), but at a minimum he proved he could be faster in round 3 than he as in rounds 1 and 2.

Foster will swim the 200 free on Sunday.

The official winner of that 200 fly was Foster’s Mason Manta Rays teammate Carl Bloebaum in 2:03.04.

I think this was a great race-rehearsal move by Carson and his coach so early into the season. 2:00, 1:58 and 1:58 are three very Respectable swims this time of the year for any world class IM’er in work and top-end speed should only be that much better as he dials it in for Trials in June.

Olympics should get rid of semi finals. Just go with prelims and finals. What are the benefits of having semi finals?

Semi finals encourage racing and interesting tactics, you often see some brilliantly executed races in semis as the pressure isn’t as high. Additionally, the general public want to see racing, they do not care for times the same way we do. This is something swimming has struggled with over the years as a vast quantity of people within the community only care for times, whereas the general public (which make up most of the viewership at the Olympics) want to see a race.

While I agree with you to an extent, I think the general public wants to see a race that results in medals would be a more accurate statement. I routinely watch the Olympics and worlds with friends who are not swimmers and they treat the semis as things to halfway pay attention to while grabbing food/drinks, browsing the phone, heading to the bathroom etc… While the general public wants to watch racing most of the time (the reason the isl could be successful), come the Olympics, emphasis is placed on gold which only happens in the finals.

Yes, you are right, many casual viewers just watching the Olympics to be entertained dont know anything about world records etc. Some may not even know who the swimmers are. The are just watching a race to be entertained while cheering swimmers from their respective countries because that,s what most people do. Most are patriotic.
The same goes for when they are viewing other sports. A hardcore basketball fan who just happens to be watching swimming justs sees a race in front of him.

A core fan of swimming who is watching swimming at the Olympics will know the swimmers and world records and is just not merely watching a race. Such a fan is looking out for world… Read more »

The only benefits are for TV and ad revenue. Which can be (rightfully) argued benefits the swimmers.

The actual concept of a semifinal is pointless, though, if the goal is to truly find the Top 3 (or Top 2 in Olympic Trials). Stats show that the semifinals don’t set this up at all, and are a waste of energy/swims for the swimmers themselves.

Exactly, the best 100 breastrokes should not need to have to most lactate training.

Cause he was simulating trials I was expecting 1:55. Based of this performance he’s clearly not going to make the team.

Ah yes, phelps and Lochte are both coming back in top shape to swim under a 1:56 and if carson can’t do that he has no chance

Yeah, it would be so smart for him to be fully tapered in late February for a simulation! 🙄
He will be in 1.56 when it matters.

Not sure whats more shocking to me: this comment or that there are two clowns who actually agreeded and liked the comment.

I could see a possibility that he was joking. But since Carson making the team is so controversal and (if it was a joke) his joke was not obvious, I would expect it to be taken literal. If Dressel did the same thing in the 100 fly and finished with a 51.2, then I would expect that it would prob be treated more like a joke.

Unless you knew this was going to happen, the rest of the field and audience was probably so confused lol.