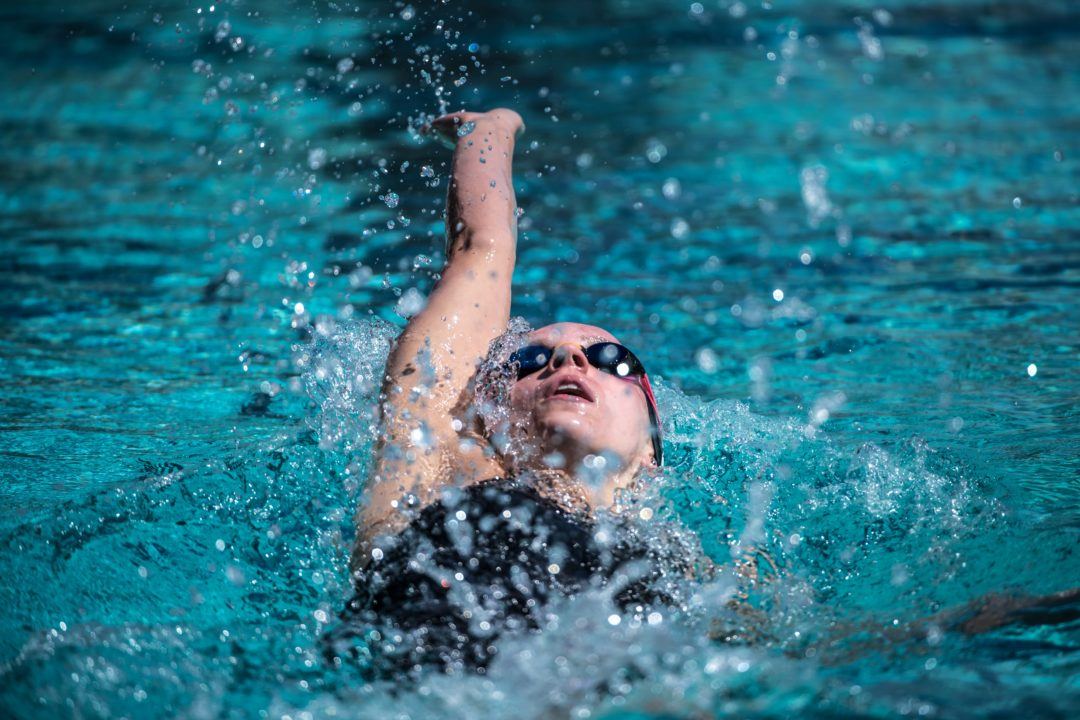 Tonight, Regan Smith will aim for a 200BK/100FL double while Katie Ledecky (200 FR) and Michael Andrew (100 BR) will aim for another PSS win in Des Moines. Stock photo via Mike Lewis/Ola Vista Photography

Tonight will begin with the women’s 200 free, where Katie Ledecky leads a stacked field by 3 seconds. Behind her is a tight field for 2nd place, led by 200 fly champ Hali Flickinger and 100 free champ Siobhan Haughey. On the men’s side, it will be the battle of the SCY record-holders between Townley Haas and Caeleb Dressel.

Then in the women’s 200 back, Lisa Bratton leads another great final alongside Kathleen Baker, Regan Smith, Ali DeLoof, and Catie DeLoof. Olympic teammates Jacob Pebley and Ryan Murphy will then face-off in the men’s 200 back.

Melanie Margalis will then headline the distance IM race, where she is seeded 2 seconds ahead of Madisyn Cox. In the men’s 400 IM, Germany’s Jacob Heidtmann leads USA trio Abrahm DeVine, Ryan Lochte, and Jay Litherland.

The session will end with the women’s and men’s 100 fly finals. Teen phenom Smith will aim to sweep both the 200 back and 100 fly, where she leads an elite field. Contending behind Smith will be another tight field, led by Farida Osman and Beryl Gastaldello. Michael Andrew, who won the 100 breast last night, leads the men’s sprint fly race. Seeded closely behind Andrew are Germany’s Marius Kusch and USA’s Caeleb Dressel.

Taking second was Club Wolverine’s Siobhan Haughey, clocking in a 1:56.48. Haughey’s season best is 1:55.21 from the 2020 FINA Champions Series, which is currently #3 in the world this year. Simone Manuel took third place in a season best of 1:56.92, moving her to 7th in the world.

Storming in with a sub-1:47 swim was Cal’s Andrew Seliskar, clocking in a World #11 time this season at 1:46.93. NOVA’s Townley Haas settled for second at 1:47.48, roughly one and a half seconds over his season best of 1:45.92 from the US Open. Florida’s Caeleb Dressel took a tight third place finish at 1:47.55, shaving 0.03s off his US Open season best. Dressel remains 22nd in the world this season with his season best.

Regan Smith led the race from the start, pushing through fatigue as Kathleen Baker gained on her during the last 25 meters. Smith touched first at 2:06.16 while Baker’s lunge forward earned her a PB and 2020 World #3 time of 2:06.46. Baker was just three-tenths off her lifetime best of 2:06.14.

Melanie Margalis dazzled the 400 IM with a lifetime best by 3 seconds, clocking in the fastest time in 2020 at 4:32.53. That performance makes her the 4th-fastest US performer and 15th-fastest World performer in history.

Taking second was Madisyn Cox, clocking in a season best of 4:38.88, which remains 11th in the world. Wisconsin’s Ally McHugh took third place at 4:42.50.

After Jay Litherland took the early lead, Jacob Heidtmann used his back-half speed to catch Litherland, storming away to a 2020 World #4 time. Heidtmann is now the 7th German swimmer to qualify for Tokyo after breaking the Olympic standard of 4:15.00.

Taking third was Team Elite’s Kendyl Stewart (57.98), just three-tenths off her World #7 season best of 57.65. Louisville’s Mallory Comerford took first in the B-final with a 59.53, touching three-tenths ahead of Hali Flickinger (59.86).

After taking out an early lead, Michael Andrew slowly began to fade as Caeleb Dressel gained on him. At the finish, it was Dressel who blasted a 2020 top World time of 50.92. Meanwhile, Andrew’s second-place time of 51.33 re-set his PB from this morning, good enough for 6th in the world. German Marius Kusch set a season best of 51.68 for third. During prelims, Kusch set a World #8 time of 51.54.

I know Ryan is still swimming with the BigBoys, and not the Masters, but the differential vs. other 35 year olds is still impressive. It confirms his conditioning is at a level to… Read more »

Why my comments missing after page refreshing.

Spectacular meet some times were faster than In the 2016 USOT. KL, dressel, Murphy. Smith, Marsalis amazing!

Insignificant compared to other times today, but Bella Hindley is showing good signs. Her PB was 56.1 from 2016 at the start of 2020. She went 55.69 at Knoxville, now down to 55.21 here in Des Moines. With GB Champs next Month you’d expect her to still be in heavy work with more time to drop. With Lucy Hope going 54mid last month, and Anderson & Hopkin swimming as they are, BS would be mental not to take a ladies 4×1 to Tokyo. Big top 5 chance.

Great swim for Michael Andrew another personal best in 100 fly

Not so excited about 27.8 coming home tho

I’m wondering what kind of lactate tolerance training he’s done.
In the spirit of his race pace training I’m betting not enough

Amazing session across the board! Getting excited for Team USA!

Even as a non American, these are exciting times by Team USA, they are starting to set the standards.