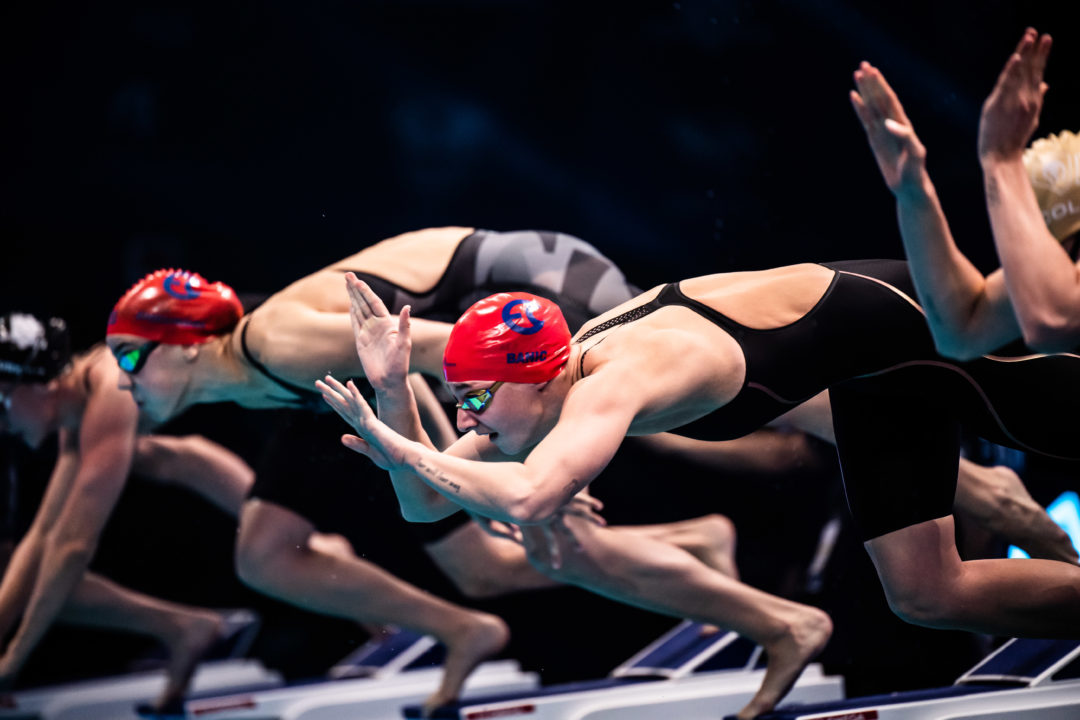 Maddy Banic will be joining Sarah Sjostrom in the women's 50m fly skins for Energy Standard in its bid to stay on top here in Budapest. Current photo via Mike Lewis/Ola Vista Photography

Day 1 of the International Swimming League (ISL) semifinal #1 brought the heat, as Energy Standard surged to the top of the leaderboard with a massive 291 points.

However, London Roar is not going away, trailing by just 21 points, ending on a big-time high note with the men’s medley relay win. That gave them the advantage of selecting the men’s skins event for this day 2 and the Roar went with breaststroke. That means we’ll see more Adam Peaty versus Ilya Shymanovich duels at the end of the match.

London Roar will need to continue to keep it close to still have a chance to move on past defending champions Energy Standard and make it to the final. Tokyo Frog Kings aren’t entirely out of it, but they have some major ground to make up and will need to maximize jackpot opportunities and even hope for a relay DQ on a leading team to potentially make it happen.

In terms of key entries for day 2 of this 1st semifinal, London Roar’s James Guy will remain on the bench, warming up for a potential string of swims should Roar make the final.

In his stead, the likes of Duncan Scott and Tom Dean, along with Adam Peaty will be among the London men looking to help make a move up the scoreboard. Look for an especially heated battle between Scott and Dean in the 200m free.

As for Energy Standard, among their arsenal of weapons from which to choose in the 100m free, Siobhan Haughey will be pairing with Femke Heemskerk instead of the usual Sarah Sjostrom. Sjostrom has a big job to do in the 50m fly skins at the end of the meet, although she is still racing the 100m IM.

Heemskerk will also take on the 200m free with Haughey once again, with the former replacing last week’s ENS racer Mary-Sophie Harvey.

The following men and women have been designated as the skins swimmers in semifinal #1. Note that Banic was taken over Belarusian teen Anastasia Shkurdai for ENS. Shkurdai’s sole event today is the 100m IM.

In the men’s, although Peaty took the 50m breast individual event yesterday for Roar, he’ll have his hands full with multiple rapid-fire rounds against the likes of start-and-turn technician Vlad Morozov of Tokyo and sprint nemesis Shymanovich of ENS.