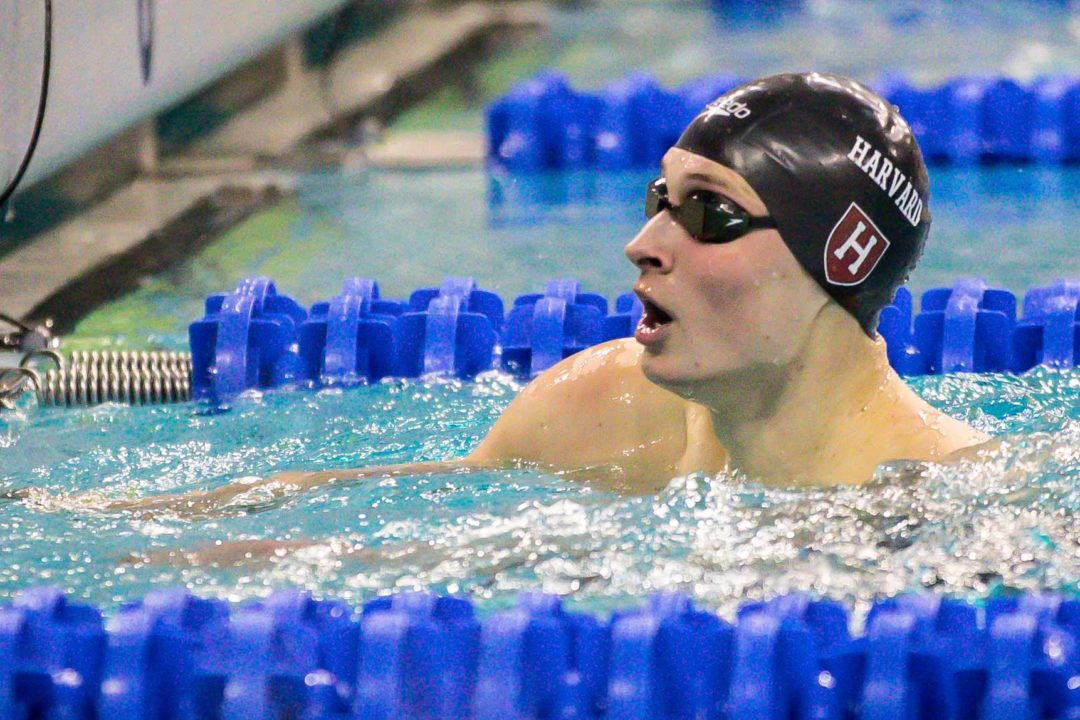 Tonight's 100 back final could see the 2nd man to ever break 44 seconds, as Dean Farris, Coleman Stewart, and John Shebat all prepare to race for the title. Current photo via Jack Spitser/Spitser Photography

Read on for a preview of a few of the exciting races to watch in tonight’s finals. For a full recap of this morning’s prelims, click here.

The 100 back could be one of the closest races of the meet, and based on this morning’s performances, we may be seeing the 2nd man to ever break 44 seconds in the event. As it stands, the only man who has ever done so is World Record holder and Olympic champion Ryan Murphy, who first accomplished the feat in 2016. We haven’t seen a sub-44 since his senior season in 2017.

That could all change tonight. Defending champion Coleman Stewart of NC State was just hundredths away from the barrier touching in 44.06 as he became the 2nd fastest man ever. The only thing that may potentially hold him back is the fact that this will be his 4th race of the day and 2nd race of the night. Stewart will also be competing in finals of the 100 fly. However, he’s been handling the double well at his championship meets and that didn’t seem to bog him down when he won the title in this event last year.

Another man to look out for is Harvard’s Dean Farris. After smashing the 200 free American Record with a 1:29.15 relay leadoff, Farris has opted to swim this event individually instead. His 44.14 in prelims makes him the 4th fastest man ever. We could see him win his first NCAA title tonight. Texas’ John Shebat, the 5th fastest man ever, looks good at this meet after becoming the 6th man to break 1:40 in the 200 IM. Shebat was the runner-up in this race for the last 2 seasons, and will be hungry to finally land on top of the podium. We’ve also got the #6 all-time competing: Grand Canyon’s Mark Nikolaev.

In the summer of 2018, Cal’s Andrew Seliskar had a breakthrough as he won the 200 free at U.S. Nationals over Texas’ Townley Haas, the NCAA Champion. Though he had typically swum the 400 IM on day 2 of his NCAA lineup, Seliskar made a change this season and will look to join the short list of men who have broken 1:30. He’s the top seed for tonight’s final, but his best time comes from his 1:30.14 relay leadoff on Wednesday night. He’s currently the 4th fastest man ever.

Haas, the 3-time reigning NCAA champ and 2nd fastest ever in this event, will look to secure the 4-peat and retake the American Record after Farris broke it on Wednesday night. He’s the only man in this field that has broken 1:30 so far, as he won the event last season in 1:29.50. Seliskar and Haas aren’t the only men who could break the barrier tonight, though, as Indiana’s Zach Apple is the 5th fastest in history with his 1:30.34 from the 800 free relay.

Indiana’s Ian Finnerty became the first man ever to break 50 seconds in the 100 breast as he won the 2018 NCAA title in 49.69. Finnerty has been setting his sights on a 48 this season, but we could see another swimmer join him under 50. Minnesota freshman Max McHugh is the top seed for finals tonight. He became the 4th fastest performer ever with his 50.30 in prelims. Finnerty, McHugh, and USC’s Carsten Vissering, the Pac-12 champion, were all under 50 in their 100 breast splits on the 400 medley relay last night.

ESPNU is showing Hockey. Is there another channel that the swimming finals will be on?

The 100 back is, I think, THE marquee event of this meet. So many players & the times are going to be super fast.

Anything less than the theme to Rocky + releasing white doves during the walk out from the ready room will be a disappointment. Make it happen.

Seliskar over Hass in the 2FR. The former is on a tear. The latter must have burned a lot of reserve in that 250, eh I mean 500 fr.

i think Dean takes this one !! he looked amazing in prelims …..

Dean takes it for the culture

I’m going with Shebat. He has improved greatly in his other events and has home crowd advantage.

If coleman stewart didn’t have the 100 fly before the back, I think he easily breaks ryan murphy’s record

He’d have a good shot, but no way would it be easy.

I say Stewart goes 43 along with top 3 in 100 fly. He seems to enjoy the tempo and pressure of multiple races.