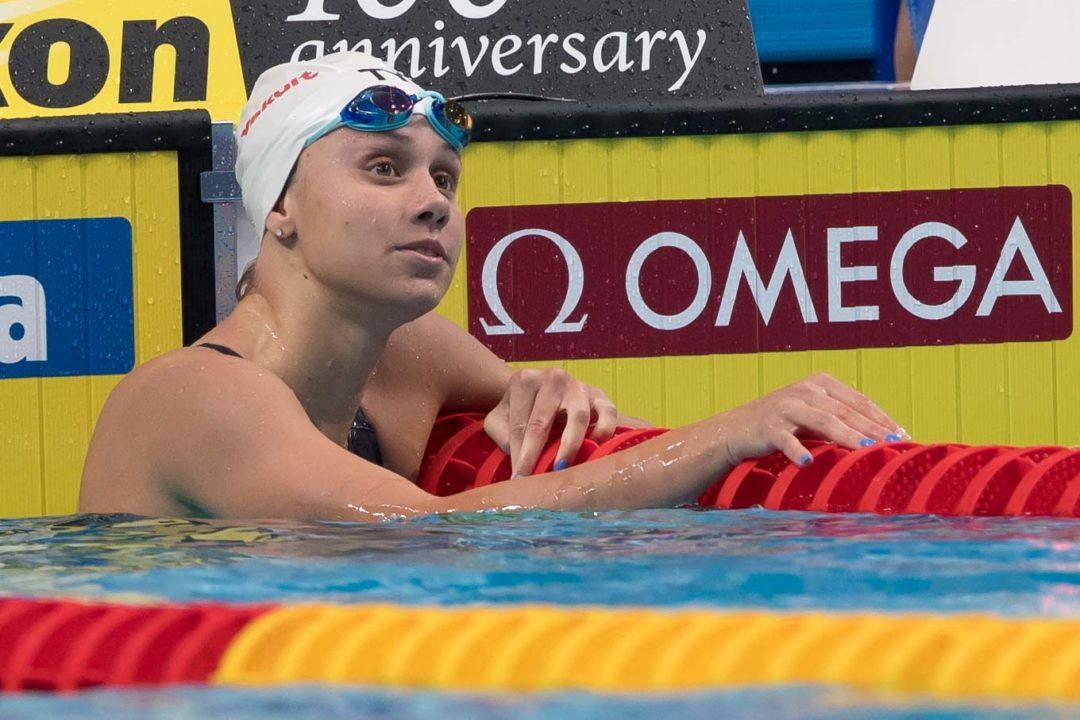 Virginia has set itself up to severely outscore the competition on the 3rd day of the meet.

Virginia had a monster anchor split from Caitlin Cooper, leading UVA to break the ACC record by over half a second.

Grace Oglesby had the fastest 2nd 50 split of the field to win the event in an ‘A’ cut time of 51.11. Oglesby split a 26.83 to mark herself as the only swimmer to break 27 coming home. Top seed, Tayla Lovemore was out really fast again, this time splitting a 23.97 on the first 50. Leah Goldman gave Duke its 2nd top 2 event finish of the meet so far, coming in 2nd with a 51.46, which will get her an invite to the NCAAs, as well as Lovemore.

Mallory Comerford was a little off her meet record from last year with a performance that while still fast and pretty dominant in the heat, was a reminder that she’s not in the same form she will be at the NCAAs. Her front half was faster than this morning, but her back half remained more or less the same, indicating that’s probably as fast as she could bring this race home at this point in the season.

Aside from Mallory Comerford winning, the big headline of this event was Virginia with an incredible 2, 3, 4, 5, 8, 9, 10 place finish, scoring a whopping 139 points in one event. Megan Moroney, who seems to back in action the fastest we’ve ever seen her, went her best time by over half a second to claim 2nd place, touching in 1:43.60. Her previous best of 1:44.32 was from the 2016 NCAAs.

Natalie Pierce came back on an incredibly tight 100 breat field with her 31.27 back 50 split, which was the fastest in the field by about a half second. She was off her prelims time of 59.3, but will get another shot at the NCAAs, since she (and more than likely the rest of top 4) are safely under what it will take to be invited.

Lina Rathsack gave Pitt its highest finish of the meet, coming in 2nd, just .01 seconds behind Pierce. Caroline Hauder was out fast in 27.93, but was just slightly to slow on the back half to win the title. 3rd through 7th place were taken by freshmen, all within a second of eachither, setting up some great rivalries for the years to come.

Elise Haan came in just .01 seconds off Courtney Bartholomew‘s meet record of 50.74, winning comfortably and getting the ‘A’ cut. Her time was a huge personal best, marking the first time she’s been under 51 seconds (her previous best was 51.13). Caroline Baldwin went a season best of 51.53, which just narrowly missed her lifetime best of 51.38. Megan Moroney went another lifetime best to come in 3rd, dropping another .17 seconds from her personal best in prelims. Baldwin will already be able to swim the 100 back at the NCAAs because she already has 2 ‘A’ cuts in the 50 and 100 free, while Megan Moroney will have punched her ticket in a 2nd event because she will be safe from the invite cutoff with her time. Alina Kendzior, who came in 4th will be right on the edge, whichever side of the cut-off she ends up on, because she came in 4th with a 52.48, just .17 seconds under the invited time from last year.

Alicia Blagg won the women’s 3 meter by a huge margin – 70 points. A freshman, Blagg is a 2-time Olympian from Great Britain, and is just 37 points from the ACC record 0f 439.70. When interviewed after the podium, Blagg said it was the “first time everything really came together”. Miami teammate Wally Layland came in 2nd, bringing the Hurricanes within striking distance of Pitt in the team standings.

NC State jumped out to a pretty big lead in the first 300 of the race, touching 1.35 seconds ahead of Louisville at the 300, but that changed when Mallory Comerford dove in. Comerford made up about half that lead in the first 50, and by the 75, she had pulled even with Vasiliki Baka of NC State. On the final 25, Comerford seemingly opened it up even more, charging into the finish to split 46.41 and finish in 3:30.66, a season best.

NC State picked up an NCAA ‘A’ cut, which isn’t that consequential since they already have a relay ‘A’ cut.

Virginia came in 5th, giving Louisville a chance to catch up a little in the team standings going into the final day. Virginia still has about a 100 point lead after tonight, meaning Louisville will need big performances in prelims tomorrow to stand a chance of catching them in finals.

The best we can wish her as a middle distance swimmer is to be at 1:55 low in 200 LCM
On the other hand just exactly one year ago when she barely broke 54 sec in 100 LCM for the first time in her life nobody here even considered her to be a possible member of American 400 free relay. And in a six months she broke 100LCM American record.
There is nothing usual and predictable about this girl. When she is out of water she doesn’t even look at first glance like extremely physically gifted swimmer.

Wrong. I always suspsected her to be on that relay. She bas been making rapid progressions since joining Louisville; she was 49/1:47 coming out of high school and got down to 46.3/1:40.3 by the end of her sophomore year. This girl works hard, and she gets what she wants.

That’s what I thought, but I keep seeing her in the 500. I can’t imagine seeing Simone Manuel swim a 500.