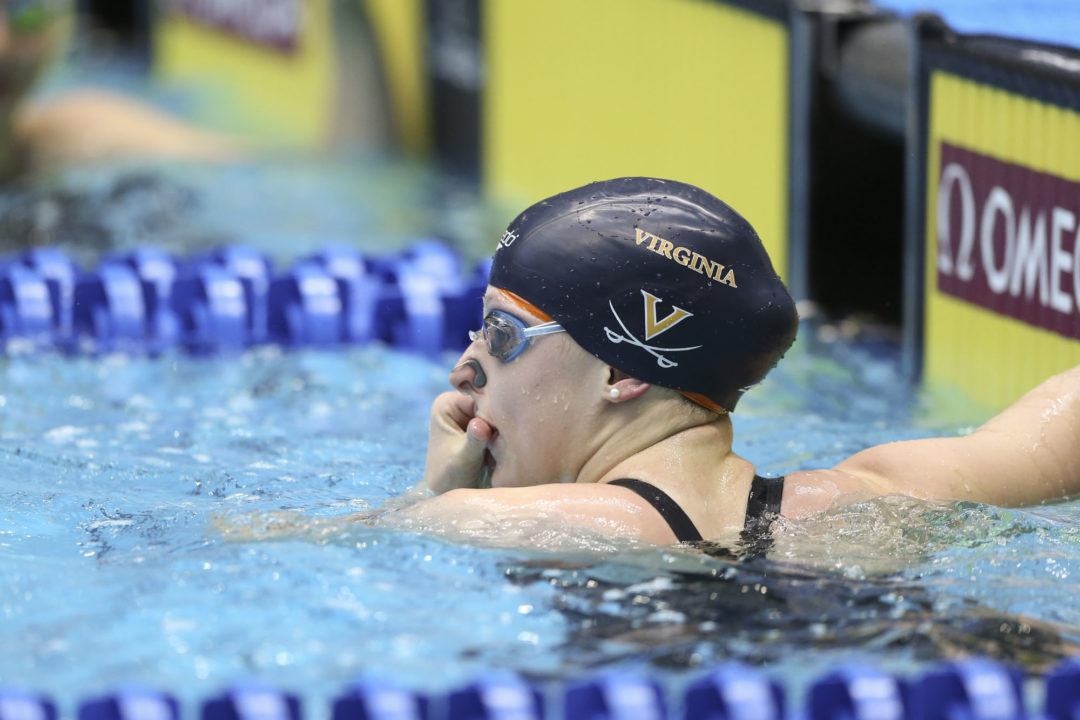 Virginia had a monster anchor split from Caitlin Cooper, leading UVA to break the ACC record by over half a second. Archive photo via Tim Binning/TheSwimPictures.com

The UVA team of Morgan Hill, Dina Rommel, Laine Reed, and Caitlin Cooper combined to post a 1:26.67 on Day 2 of the Women’s ACC Championships. They took down the ACC record of 1:27.25, set by NC State last year at the NCAAs. Caitlin Cooper threw down a sizzling 21.03 split to anchor Virginia’s relay, catching Louisville, which also broke the ACC record with a 1:26.92. Here’s a comparison of the new record versus the old:

NC State’s splits were a lot more consistent, whereas Virginia descended their splits, coming down by well over a second from the lead-off to the anchor. Cooper’s 21.03 is her fastest split to date, coming on a day where she already went 2 huge flat-start best times. Coming into today, her best time was 21.92, then she went 21.73 in prelims and 21.54 in finals, breaking the meet record in finals. Her fastest flying split was 21.23 from last night, and she just dropped a full 2-tenths off that today.

You know you’re on the right track when you’re getting accused of resting for every dual meet in January.

Not shocking given what they did in the individual 50 . . . but still, wow! So used to seeing UVA put four swimmers “up” in the 500 — not the 50. Desorbo putting his stamp on this program immediately

Looks like they rested for this meet. Probably shaved. What’s with this team?

Resting for their college conference championship, no!!!