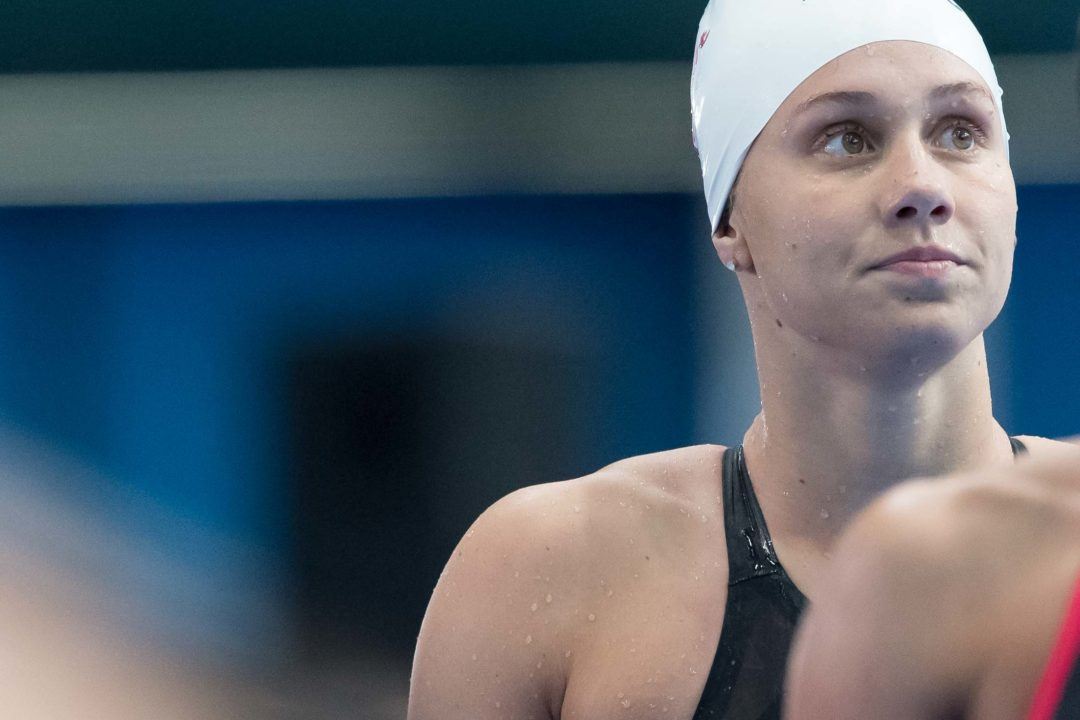 The overall level of competition is undoubtedly high at the 2018 NCAA Championships, but a few swims stood out as "off." Archive photo via Mike Lewis/Ola Vista Photography

While we always hope that swimmers hit their tapers, execute their race plans, and meet our (extremely high) expectations for them at NCAAs, that doesn’t always happen — Thursday’s prelim session is example A, and your Pick ‘Ems have probably taken a hit.

While the session was overall extremely fast (it took a 4:38 to score in the 500), a handful of swimmers seemed to have “off” swims, and some swimmers expected to make the final were left on the outside looking in. These swims probably appear a little worse than they actually were relative to the overall level of competition. For comparison, it took a 1:55.59 to make the A-final in the 200 IM in 2017, and 4:38.09 to A-final in the 500. This year, both of those times would have been around 12th place.

In a heat that was generally a lot slower than it was seeded, Forde’s lead was swallowed by Drabot, who closed in 56.45/56.17/55.67/54.92. Forde’s 4:37.40 was a lifetime best and good for 2nd in the penultimate heat. Her time would’ve qualified 6th last season. Typically, when you’re 2nd in one of the circle seeded heats, you make the final, especially in distance events.

Most notably, Louisville’s Mallory Comerford‘s finished 7th in that heat. Comerford, a top 5 seed in this event coming into the meet, was 27th overall. Some swimming fans speculated she had the potential to be in the low-4:30s, but not 18 hours removed from throwing down the fastest 800 free relay split in history, Comerford added six seconds to her 500 seed time, going a 4:41.24. Interestingly, her sprint free swims today were still pretty sharp. She put up a 21.11 in the 200 free relay and a 46.13 free split on the 400 medley relay.

Should we really be worried about Comerford? Probably not. But was that race uncharacteristically “weird” after a year of constant success? Definitely. There’s no word yet on if something particular went wrong for her, but we’re keeping our ears to the ground in Columbus.

The most curious swim of the morning, though, has to go to Joanna Evans. She was the 3-seed with a 4:35.05 heading into the day, and fell to 35th with her swim of 4:42.98. She’s typically on Texas’ 800 free relay, but didn’t swim it this time around. This comes after Evans scratched her individual races at the 2018 Big 12 Championships, so we can’t really tell if this was an anomaly or a if it was due to injury/illness.

In the 200 IM, Siobhan Haughey ended up 10th after coming in as the 6-seed. After going 1:55.09 at last year’s NCAAs, she was 1:53.48 at the Georgia Invitational in December, and 1:53.59 at the 2018 Big Ten Championships. We know she was out with an undisclosed injury at the beginning of the semester — could her training just not have held up? That would seem more likely if she hadn’t already gone a quick 1:40.49 in her 800 free relay split last night (3rd fastest in the field). Granted, as already mentioned, the 200 IM field was about half a second faster this year, and that was the difference between the A- and B-final for Haughey. It’s not necessarily that her race was poor, it’s more that it wasn’t great and the field as a whole sped up. It could also have been a matter of pacing herself relative to what she thought it would take to final.

In spite of a few bracket-busting swims, the early returns were all very fast compared to last year. To get 8th in the 500 free today, it took a 4:37.35 (about 3/4 of a second faster than last year). To make it to the championship final of the 200 IM, it took a 1:54.78 (about 3 tenths faster than last year). The 50 free was the only event slower as a whole than last year. And, well, it’s a 50, so we’ll see what happens tonight. If you’re antsy to analyze something, Simone Manuel had one of the slowest starts in the field (.7 reaction time), and Erika Brown had the fastest back half of her swim (11.01).

My son had a slow start to his most recent championship meet. His mom could tell something was wrong. One visit to the doctor later, turns out he was swimming with strep throat.

I hope that none of the ladies at the NCAA meet have anything like that.

thank you for that lovely story…

This plus, when was the last time there was a swim off for the 500 free?

well, I stand corrected then!

It’s not unusual for a swimmer to have a bad swim at NCAAs. Nerves, resting for conference and not being able to hold on, getting sick, etc. are all fairly common factors. I am guessing Joanna Evans has been sick or injured since Big 12s and no one has said anything. What was “weird” this morning was that swimmers swam very well in some events and terrible in others. Either Comerford rested too much to finish a 500 or she just never got going. Her other splits were on point. It is also possible limited training due to injury has affected the ability of swimmers to do multiple races over time. We don’t do 7,000 yard practices to improve our… Read more »

Nerves can play a big role. They take your legs out and can lead to ‘weird’ swims.

Since when has Mallory Comerford ever been considered an elite 400 m freestyler on the international stage?

You can “fake” a short course race by maintaining your speed off the turn until you get to the flags. Long course you have to settle into a rhythm.

She must have pulled away from everyone in her prelim heat with a big drop like that.

Louise Hansson’s scratch. She showed she was one of the most versatile swimmers in the country this season, but I guess they opted for putting her on 5 relays – USC has surprisingly little depth behind her this year.

I picked Hansson, Comerford, and Harnish today, plus Evans for the mile – screw me.

Ledecky, Bi, Comerford, and Evans so only one of my picks even made the a final

I like the analysis of TAKINPICS that mixing 50 and 500 races may cause the issue of bringing sprint mentality to the middle distance race. On the other hand not being busy with 500 race may help her tomorrow in her most important race of the meet. Mallory is a swimming sensation, for sure. To complete the picture she needs titles and records in individual races. It’s about time.