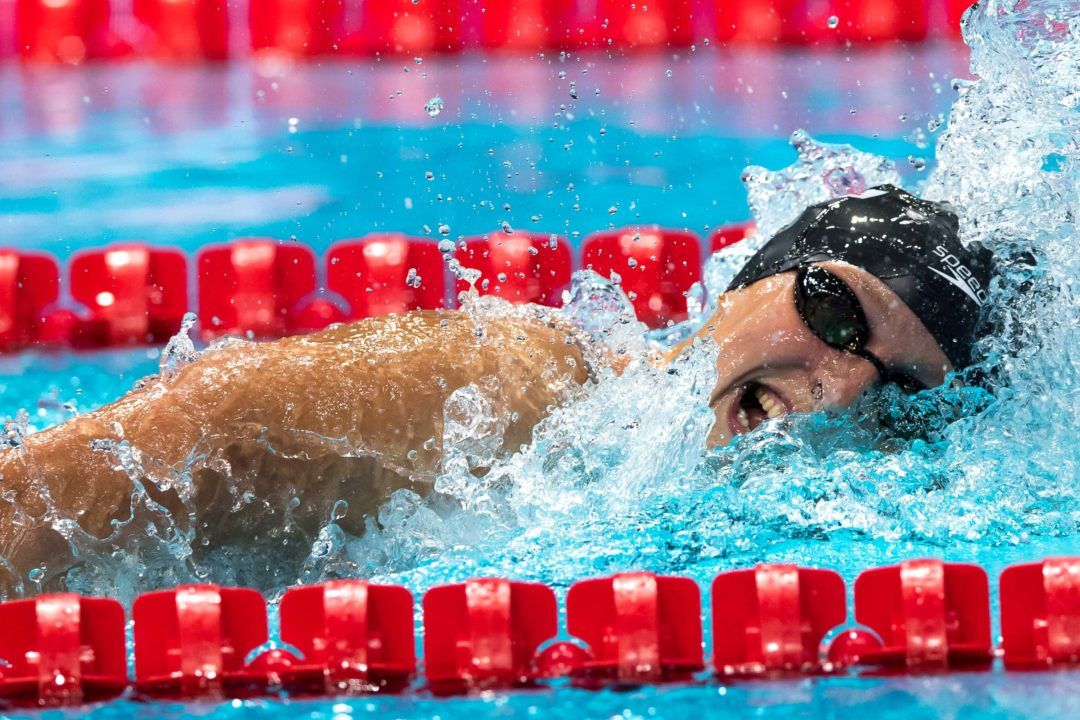 Katie Ledecky became the first woman to break 9:00 in the 1000 last year, and she's poised to make history yet again in the 1650. Archive photo via Mike Lewis/Ola Vista Photography

But the exciting racing here will be for the remaining podium spots.

Penn State’s Allyson McHugh dropped almost 16 seconds off her best to win the 2018 Big Ten Conference Championships last month and took 10th in the event at the 2017 NCAA Championships. Repeating that time, after a 16-second drop, at NCAAs will be a tall task though. NC State’s distance group has been on fire this entire year, and Hannah Moore is no exception. After taking 4th in this event at NCAAs in 2016 (15:47.20) and 5th in 2017 (15:52.75), she was already back down near her best at the 2018 Atlantic Coast Championships last month, securing down her seed time of 15:48.37.

Ohio State’s Molly Kowal broke 16:00 for the first time in her life at Big Tens this season, and did it in grand fashion. She dropped over nine seconds — from 16:02.35 to 15:53.11 — to take third in a loaded final that featured Allyson McHugh and Yirong Bing in the 1- and 2-spots. However, she’ll have to look out for Hawaii sophomore Phoebe Hines (#9 seed) and Michigan freshman Sierra Schmidt (#10 seed), who similarly dropped major time this year. Also of note: Michigan’s G Ryan is entered as the #14 seed — they dropped a 15:44.93 at the 2016 Big Ten Conference Championships, but have yet to break 15:59 since then.

I agree… I believe that Mchugh will DESTROY Ledecky and be the first under 15:00… she was deadlifting 400lbs the day before the team left for Big Tens. She has been doing USRPT nonstop for the last month, I predict four body lengths ahead at the 50!

She is so cool, smart, hardworking and funny. I hope she breaks 14:53 and qualifies for Men’s NCAAs this year!

4
0
Reply
Caeleb Dressel Will Get 8 golds in Tokyo

I don’t think she’ll do it. Fight me

I agree. Also, fight me.

I’m just curious what makes people to believe that the 15min barrier will be taken at NCAA this year. Not as I don’t want this to happen, but are there any indications this season that i’ve missed that they know.
She was great at PAC-12 last season setting personal bests at all events she swam. Two of these PBs were actually American records. In final she improved them (200&500) but in 1650 she was 15:07. Wasn’t she probably prepared for this race or 15:03 records was indeed something special?
This year at PAC -12 she performed well again but in freestyle events a little bit slower. Yeas she improved her 400IM but it was mostly due to better… Read more »

The article answers your questions. The multiple 1000/200 double performances are the indicators. It’s not a guarantee, of course, but the article lays out why it’s possible. Torrey isn’t just throwing stuff at the wall as your comment seems to indicate.

There is no need to be that offensive. You explained it clearly. That is multiple 1000/200 doubles that indicate Katie’s good form heading to the finals. Good if it is so. The reason why I missed this obvious sign is that all these doubles were done under cruise control as her splits indicate. That is how she can swim half an hour not getting exhausted.

I don’t need any proof – I am not betting on her performance in a week. I’m trying understand why some commentators here are so certain that she will swim 1650 event under 15 min on day four of the meet after possible personal bests at 200, 500 free and 400IM just before 400free relay where she is needed to be at least at 48 low. To do so she should be in one of her best form. Her performance at PAC-12 last year suggested a great form and she did improved her PB at 200 and 500 . And she delivered 48 in relay. But there were no record at 1650. This year she was as good at PAC-12… Read more »

All the predictions aside, I’m still gobsmacked see how much further ahead Ledecky is than even 2nd place. Just amazing.

Would it be possible to add predicted times to these previews?

Easy Speed – we’re planning on doing a ‘predicted winning times’ article later on. We used to predict times in these previews, but they felt rather meaningless to us (though I’m sure they provided some teams juicy bulletin board material), so we decided not to this year. You’re welcome to predict times in the comments, though!

who do you think can sneak into the A final and is the “dark horse” contender?

Schmidt will be in the A final for sure.

What about Becca Mann?