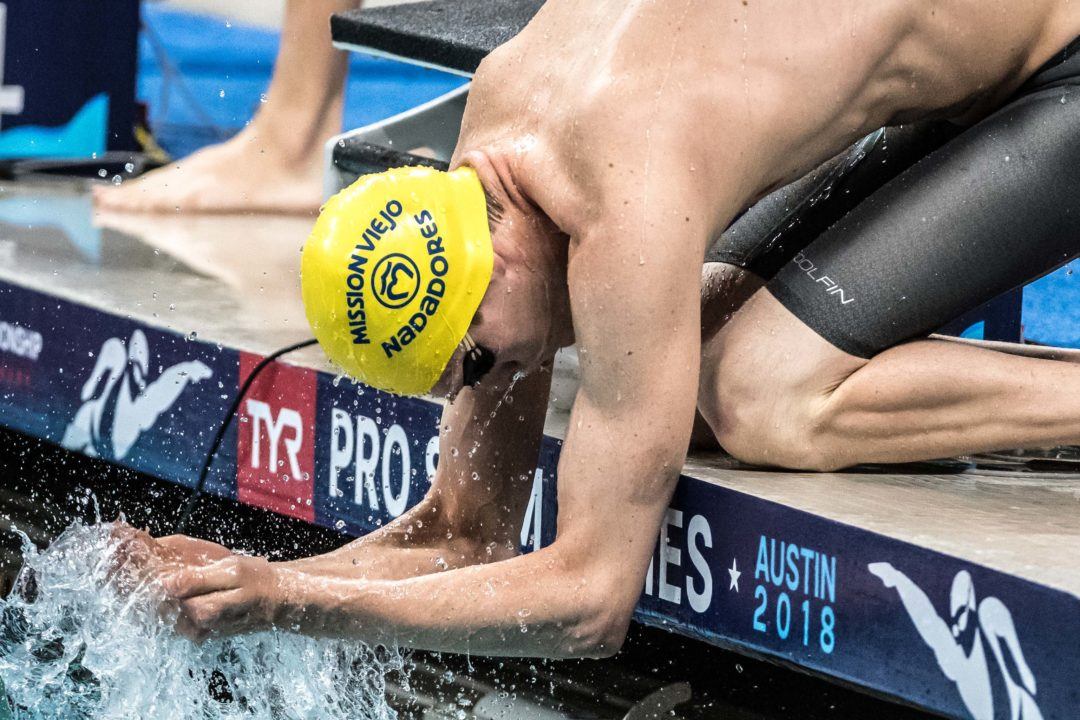 Grothe, the fastest man in the nation this year and the only American to break 3:50 in-season, looks poised for a big swim after shattering the American Records in the 500 free and 1650 free at Winter Nationals this season. Current photo via Mike Lewis/Ola Vista Photography

Heading into U.S. Nationals, Indiana postgrad Zane Grothe is the man to watch in the distance events. Grothe, the fastest man in the nation this year and the only American to break 3:50 in-season, looks poised for a big swim after shattering the American Records in the 500 free and 1650 free at Winter Nationals this season. He’s already the only man in this field coming in with a lifetime best in the 3:44-range (save for a possible entry by Dwyer, who seems unlikely to swim it), but if he performs anything like he did in December, we could be seeing him break into the all-time American top 5.

Grothe is currenly the 7th fastest American ever in the event with his 3:44.42 from last summer’s nationals. Behind him are Texas teammates Townley Haas (3:45.04) and Clark Smith (3:45.74) with their times from 2016 Trials. It would take a 3:43.92 or better to move into the all-time top 5 Americans, while a 3:43.11 or better would push him into the all-time worlwide top 10. Grothe looks like the man to beat, but Haas and Smith should both be in the mix as well. Haas is coming off a strong NCAAs where he won the 500 free, just missing Smith’s NCAA Record. Smith underwent a heart ablation in March, but was back in the water shortly after and returned to competition in May.

Though he previously represented Italy, Florida’s Mitch D’Arrigo officially started swimming for the USA last summer and is now competing for spots on the national team. D’Arrigo went his lifetime best 3:46.91 at the 2014 European Championships. Though he hasn’t been close to that since then, he did break 3:50 for the first time last year when he represented the U.S. with a 3:49.84 at the 2017 World University Games. If he gets anywhere near his best time at nationals, he should be in the hunt for a Pan Pacs spot.

Aside from the aformentioned 4, we have a handful of Americans entering who have broken 3:50. Two of the bigger threats are Stanford’s True Sweetser and Grant Shoults. Sweetser went his lifetime best 3:47.94 at the 2016 U.S. Open and represented the U.S. in the mile at 2017 Worlds. He missed the final by just 2 tenths at 2017 nationals and wound up scratching out of the B final. Despite a rocky 2018 NCAAs, if he plays it safe in prelims this year and gets into the top 8, he probably has a time under 3:50 in the tank. Shoults went his lifetime best last summer with a 3:48.73 at nationals last summer and placed 4th. He’s the 4th fastest American this season and has been significantly faster in-season as well with an in-season best of 3:51.82 compared to a 2017 in-season best of 3:55.23.

Olympic medalist Conor Dwyer hasn’t swum a 400 free since 2016, but it’s important to note that he could be a threat if he decides to go for it. It seems unlikely, since Dwyer has only focused on 200s and below thus far in this Olympic cycle, but he could defnitely shake things up ifhe’s still training for the 400. His lifetime best is a 3:43.42 from the Rio Olympics, which would make him the fastest man entered in the field.

The 400 will be one of my favorite races. I’m a big fan of Clark Smith. Zane and Townley are amazing. And I hope the comment section goes back to it’s original format.

Why would u keep ur name the same. Rio is past

My eyes are on Haas.

look out for that yeadon. guy’s been having major drops all year.

Braden Keith says:
July 16, 2018 at 12:51 pm
Braden wrote on another thread:
Hey currentcollegeswimmer – thanks for your feedback, this isn’t a ‘new layout’ per se, it’s just a stopgap while there’s a glitch in the commenting system. Discuz, which is a massive platform, released an update last night that crashed the whole site (and I imagine many others, as our setup is not atypical).