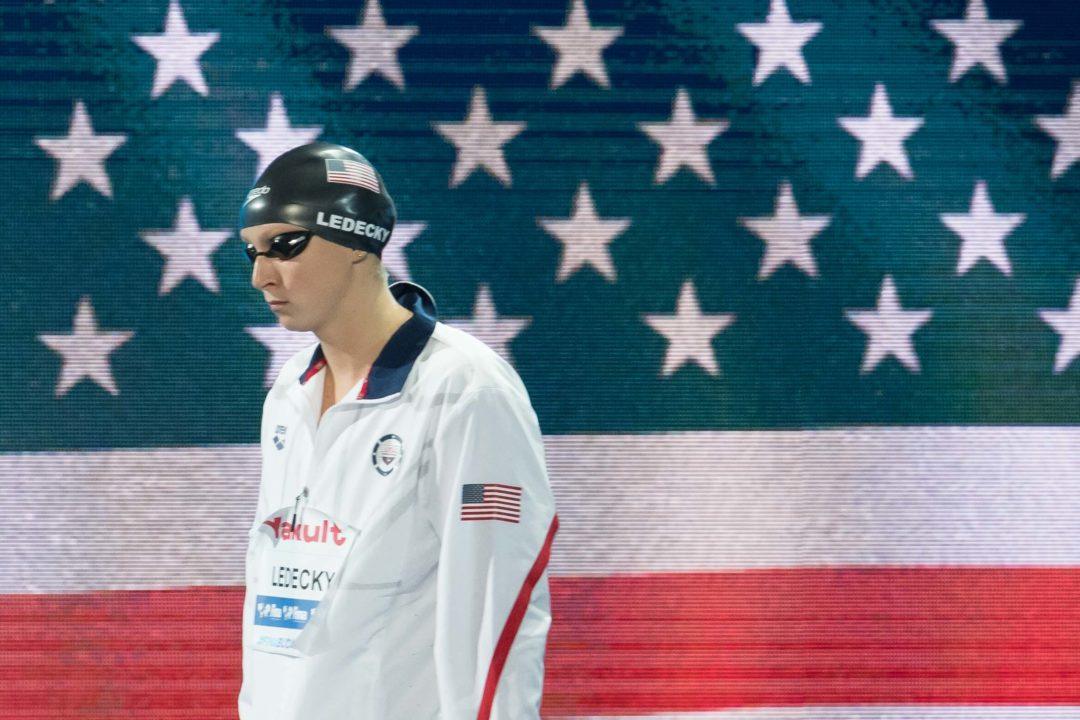 American swimmer Katie Ledecky has been nominated for an ESPY award for Best College Athlete after another record-setting season in the... Archive photo via Mike Lewis/Ola Vista Photography

Ledecky, who turned pro after her redshirt-sophomore season at Stanford last year, is one of 4 nominees for the awards.

The ESPY Awards, which stand for Excellence in Sports Yearly, is ESPN‘s annual awards program. The majority of the awards, including the one that Ledecky was nominated for, are decided in part by an online fan vote. Winners will be announced during the annual awards show on July 18th.

Other Swimmers Who Have Won ESPY Awards:

It’s funny because she makes a very reasonable and honest case for an award for most dominant athlete, any level, any sport.

I want swimmers to win always – it’s good for business, and of course I’m more invested in swimming than other sports – but on the collegiate level (which is what the award is geared toward, though the name of it is vague – NCAA athletes) – Brunson or Wilson make very strong cases. Ledecky, in reality, was beaten at NCAAs, in the 400 IM, and she was only on one relay this year. Of course, we all know that she’s globally dominant in her best 3 races, as much as maybe anybody in swimming ever has been, but looking in isolation of “college athletics,” it’s not so clear-cut that she had the best year of the 4 named.

Disagree. Ledecky may not be the choice but not for reason you state. When you look at the totality of Ledecky’s season, her leadership of Cardinal team during in-season with pretty much complete disappearance of Manuel to regular season injury and Eastin’s in-season invisibility, Ledecky four times named National swimmer of week, took charge and trounced as Pac-12s swimmer of meet for second straight year with ARs and NCAA records, hung in to take team to second straight Natl Championship when they hadn’t even won one in 19 years, she could have taken millions instead as a pro right away off 5 Oly and 14 World Champ gold, she should win. She was unbeaten in 4 different events across 19… Read more »

One way or the other, Ledecky and Card swim colleagues were a big part of making this happen–the first ever womens and mens program sweep of the Capital One Cups for the top college athletic programs by a University (by Stanford) and the Cups will be handed out at the ESPYs.

I think they’d give it to baker Mayfield over Brunson. Ledecky deserves it though

Brunson was picked in the 2nd round of the NBA draft and was the fourth guy picked from his own college team in the NBA draft, so how he even scored a nomination is somewhat questionable. Mayfield had to go to two colleges, and still didn’t really get things right, and no Natty Championship. Ledecky just straight-up better in her sport than any of the others are in their sports, but whatever.

Brunson was the best player on his college team, and they steam rolled their way to a title this year. The nba draft weights potential over production and his size, athleticism, and age limit his potential (especially defensively) in the nba. That doesn’t mean he wasn’t the best player in college basketball, I wouldn’t be surprised if he wins it. Baker Mayfield was by far the best quarterback in college football this year and led his team to the final 4. They were a touchdown away from playing for a national championship. He went to 2 colleges but was productive at both. Honestly, I think the most dominant collegiate swimmer this past year was dressel. He won all 3 events… Read more »

What probably hurt Dressel a lot were two things–the fact that FL did not win anything as a team like a National or Conf championship. Second, his wholesale admission at NCAAs on Swimswam post-race video that he had fueled himself up with PreWorkout supplement probably did not help his chances. That could have made nominators as jittery as Caeleb said he was when he got up on the blocks at NCAAs. Mayfield’s poor off-field behavior (and actually on-field behavior too) won’t woo voters either.

What more would Caeleb Dressel have to do to get his own nomination? His NCAA season was as good as it could get, and he won 7 golds at World Championships over the summer.

I’m not trying to take away from Katie Ledecky’s nomination. It was totally deserved.

I know it doesn’t have direct association with the college related awards but still: a couple word records and individual Olympic medals will help a lot his popularity outside the world of swimming.

As noted by Kornheiser and Wilbon on ESPN’s own PTI show, it’s actually fairly ill-considered by ESPN to nominate Katie Ledecky–who won the 2017 AP Female Athlete of the Year over Serena Williams and is the only woman ever to win USOC Athlete of the Year three times–as “Best College Athlete”. And the description they provide of her is incomplete and non-sensical–she has broken 14 WRs (and had 11 ARs in college swimming alone), and helped lead Stanford to two straight Pac-12 titles (Swimmer of meet two straight years) and two straight National Titles. Details, details. Plus, they left out all of her Swammy Awards!

Unfortunately for Caeleb Dressel, with the Ryan Lochte Rio debacle and Florida connection, I think the powers- that-be might be a little squeamish about throwing a huge spotlight on Caeleb, what with the tattoos and the braces he had on his teeth at age 21, and his supplement talk. Surprising that he doesn’t have a suit deal yet as a pro, could be a reflection of this squamishness on the part of the commercial establishment.

If we assume both men’s and women’s basketball get one nomination each, and so does men’s football, there is only room for one more nomination which of necessity is that of a woman.