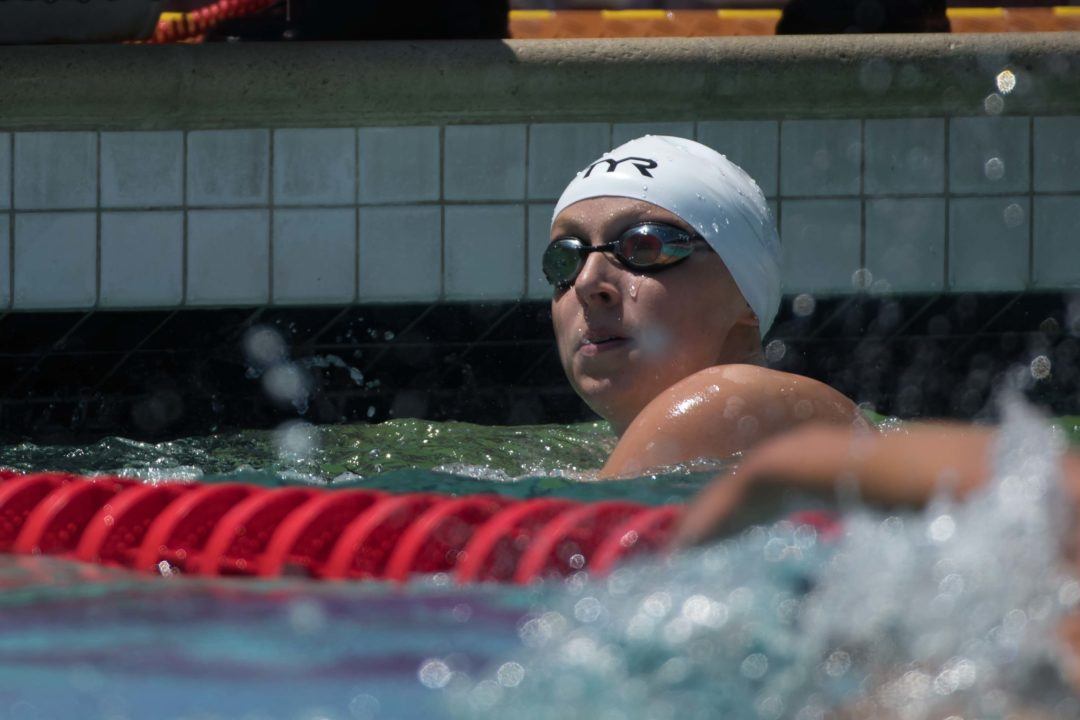 Once the exciting young upstart looking to upset the world's elite, Katie Ledecky is now the veteran presence looking to quell an uprising of young international talent in the women's 200 free. Archive photo via Mike Lewis/Ola Vista Photography

In 2012, Katie Ledecky was the unknown element, a little-known 15-year-old who stunned a world record-holder for Olympic gold in the 800. By 2013, she was established as the best female distance swimmer on the planet, and by 2016 she was the 19-year-old youngster trying to expand her Olympic dominance down to the 200 free against veteran Sarah Sjostrom.

In 2018, the 21-year-old Ledecky has officially crossed to the other side of the paradigm: she’s the established veteran, the status quo, the reigning world power, and she’s got the next generation of world freestylers looking to follow in her footsteps… by knocking her off the throne.

It won’t be easy, and it’s not necessarily likely, but the up-and-coming group is talented and rising fast. The 200 free is the best example.

Ledecky is, of course, the class, the 3rd-fastest performer all-time, the defending Olympic and Pan Pacs champ. She went 1:53.73 at the 2016 Olympics, one of only three women ever to break 1:54. But she slid to 1:55.18 last summer, getting outraced by the world record-holder Federica Pellegrini in what was her first-ever international loss in an individual event. She’s already been 1:54.58 this year, though, and almost-certainly hasn’t tapered yet.

Second in this year’s world ranks is Taylor Ruck, the Canadian 18-year-old who has looked almost unstoppable this season. Ruck is rising extremely fast, and won a tough Commonwealths title earlier this year, one of eight medals she’d win at the meet. Her 1:54.81 is just tenths behind Ledecky this season.

Australia has its own fast-rising youngster: 17-year-old Ariarne Titmus. She was second to Ruck at Commonwealths by a hair (1:54.85) and is also second in the world this season in the 400 free. Both Ruck (#7) and Titmus (#10) sit inside the top 10 performers all-time in the event (as of the writing of this preview, though they could move down based on results of the European Championships) and Titmus is #6 all-time in the 400 free.

And keep an eye on Japan’s young dynamo, Rikako Ikee. Better-known for sprint fly and free, Ikee has proven she has range up to the 200 free, going 1:55.04 this year. The 18-year-old is also improving steadily.

It’s worth noting that Titmus’s coach has suggested she may drop the 200 free at Pan Pacs, though she is still openly targeting Ledecky in the race at the 2020 Tokyo Olympics. Australia’s Emma McKeon,the Olympic bronze medalist and fourth seed in the 200 free, has already announced she’ll drop the event.

That means the 200 free should be Ledecky vs Ruck vs Ikee vs (maybe) Titmus. The others to watch out for are 2012 Olympic champ Allison Schmitt (who looks as good as she has since coming back from an extended competition break) and the rest of her American team: Leah Smith, upstart Gabby Deloof and upset specialist Mallory Comerford. Those four should all be competing for individual World Championships entries, meaning the prelims of this event might be more serious and competitive down the line than finals will be.

The 400 is a much longer shot for anyone to dethrone the world record-holding Ledecky, who has never lost this race in international competition. Titmus is close to becoming just the second woman ever under four minutes, after winning Commonwealths in 4:00.93. Leah Smith was the World Championships silver medalist last summer and sits 4th all-time in 4:00.65, though she’s only been 4:02.2 this season. From there, the dropoff is precipitous, with 4:06 Kiah Melverton of Australia the next-best seed. None of China’s young superstars are in the mix, so the next spots come down to Americans Hali Flickinger, Katie Drabot and Schmitt (the top one of whom will probably be relegated to the B final with only two athletes per country allowed into the A final) along with Japan’s Chihiro Igarashi and Canada’s Mackenzie Padington.

This Titmus girl openly targeting Ledecky is slightly hilarious. You’ve got a ways to go Ariarne.

When the only things known about Ariarne Titmus are that she had unexpectedly impressively successful meet 4 months ago and that she is 17 then it would be better to be prepared for strong competition beyond the level of your comfortable zone. It may turn out that what’s happened in April was a pinnacle of her swimming career, but who knows that now.

If not of this 800-200 double I would certainly expect a very strong result by Katie Ledecky in 200. At Nationals she swam impressive 1:54.6 having first have just one second slower than her 100 race at the same meet. That by the way was her season best in this event. Who on the Earth swims 200 free this way? That is a good indicator that being properly tapered she can challenge her personal best in this event. But this double makes things more complicated. We may see that she will take easy on day 1 in both events.

I don’t understand the criticism of Titmus, yes she is probably not the Australian ledecky, but she is a 17 year old looking to win golds in the future and if you want to do that in womens distance swimming, you need to take down Ledecky. Big talk with little to back it up, I know, but swimmimg needs someone to challenge Ledecky, or at least a story of someone trying to.

Oh, we have plenty of talks. For instance, in 2016 after making 8:16 Boglarka Kapas promised to drop each year 2 sec so by 2020 she will swim 8:08. Next year Li Bingjie after being just 3 sec (so little 😀 ) behind Ledecky said that she personally doesn’t know but people around are talking that not much time left for Ledecky to reign. And now Titmus generously decided to leave for Ledecky 1500 but in other distances she will kick her out not later than 2020. There is no problem with the absence of talks.