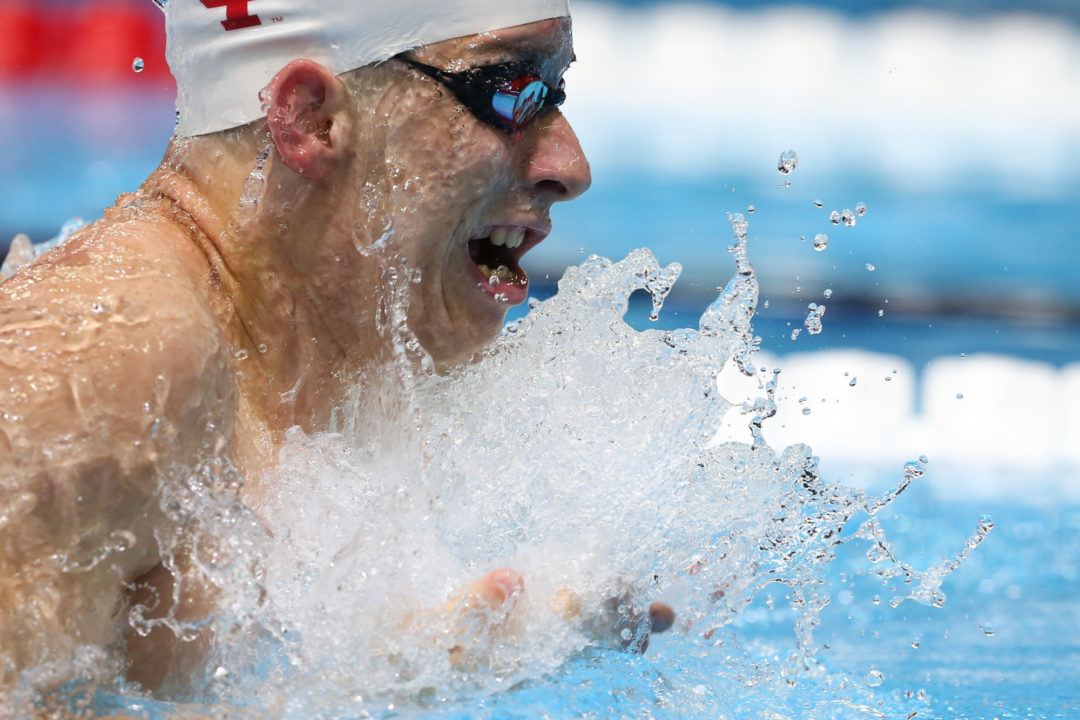 The favorite heading into the meet, Indiana's Ian Finnerty, is the only man to have broken 51 so far this season. Archive photo via Tim Binning/TheSwimPictures.com

The 100 breast could end up being a close one at the 2018 Men’s NCAA Championships. The favorite heading into the meet, Indiana’s Ian Finnerty, is the only man to have broken 51 so far this season, but there are a few guys who could step up and challenge him. His teammate, Levi Brock, is the 2nd seed heading into the meet, giving the Hoosiers a shot at a 1-2 finish. Brock dropped over a seconds from his time at Big Tens for a 51.45. Finnerty took half a second off his time at Big Tens. While he’s added from Big Tens to NCAAs over the past 2 seasons, Finnerty now has those NCAA experiences under his belt and could have a breakthrough here.

The top 2 returners from last season’s final are USC’s Carsten Vissering and Cal’s Connor Hoppe. This season, Hoppe has been slightly faster, but their best times are just a hundredth apart. Vissering, despite missing the first semester of competition as he trained and studied abroad, has had some strong showings this season. Last season’s final was stacked with seniors, so the only returner besides Hoppe and Vissering is South Carolina’s Nils Wich-Glasen. Though he has a low seed with his season-best 52.62, he’s been as fast as 51.58 before (2017 SECs). Like Wich-Glasen, Tennessee’s Peter Stevens hasn’t broken 52 yet this season, but has a best in the 51-mid range. Stevens has shown great speed in his 50 breast relay splits. It wouldn’t be surprising to see Stevens bring in a 51-low.

We have a handful of guys who have broken 52 for the first time this season. Minnesota’s Conner McHugh, the 3rd seed, is among them and has the home pool advantage. McHugh finished 3rd in the B final last season. In his first season with Missouri State, Blair Bish has clipped the 52-barrier. Last season, he placed 15th as a sophomore for Arizona and, like Stevens, he’s shown great seed in his 50 breast splits. Michigan’s Jacob Montague dipped into the 51-high range at Big Tens. Cornell’s Alex Evdokimov is another swimmer to look out for after he set the Ivy league record in 51.85.

Returning after scoring in the B final last season in Texas A&M’s Mauro Castillo. He hasn’t broken 52 yet, but we may see him get there. He’s already been 52.1 this season, a best time, and typically makes improvements from SECs to NCAAs. Louisville’s Carlos Claverie, who raced with Castillo and Bish in the B final last season, enters this year’s meet with a 52.69, but has been 51.8 before. Either of those guys could break 52 to make their way into the final, as could West Virginia’s Jake Armstrong, who won Big 12s this season with a lifetime best 52.11.

Well Dan, I really like Blart Bish, he’s a great guy who really knows how to race! GO BEARS

In college swim years Michael would be finishing up his freshman year. He’s about to turn 19 next month.

Actually, it looks like he would have been second if you used everyone best times.

Waited to see how he did on the relay? SMART!

Hi Random123- I had my picks made before the session started tonight, we just hadn’t published it yet.

A likely story. especially after saying Finnertys gonna add In the 200 breast and miss the top 3-4…..

Actually, I didn’t write the 200 breast preview… That was a different person.

Just playing with ya 😉

I knew someone would! Haha

Edit: by “he” I mean Finnerty.

As my last overall pick in my Fantasy Swim league, I hope this happens haha

IU one…two because it sounds good…and they are good!