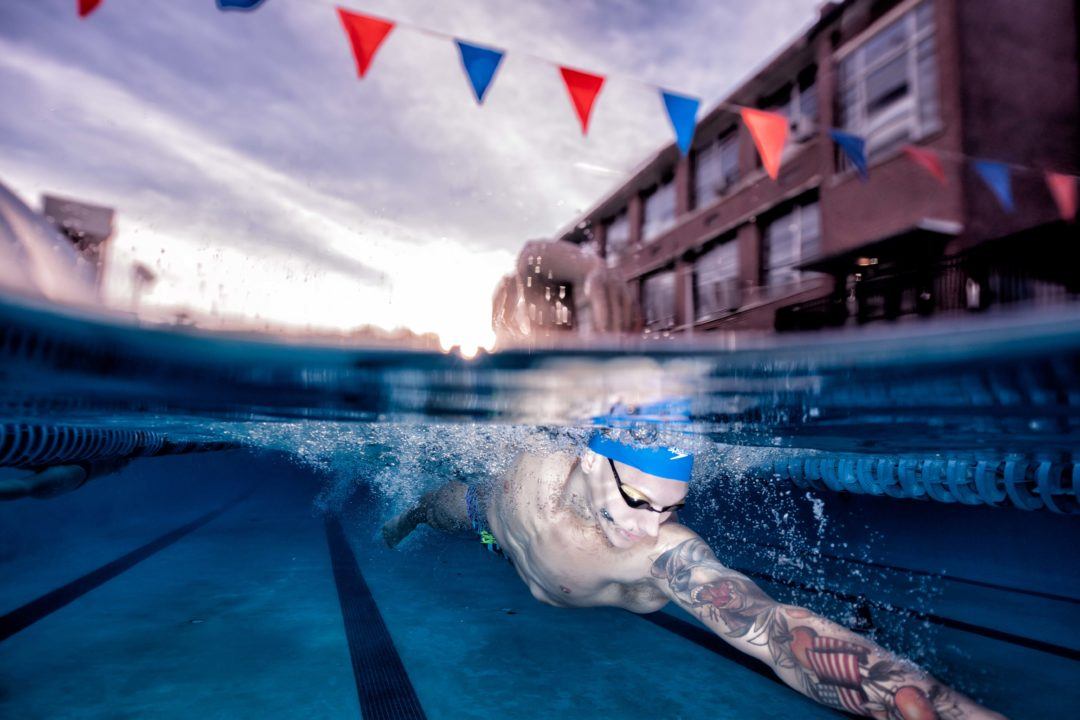 Last season, the crowd was on its feet as Florida's Caeleb Dressel came as close as he could possibly get to becoming the first man ever to break 40 in the 100 yard freestyle. Current photo via Mike Lewis/Ola Vista Photography

Last season, the crowd was on its feet as Florida’s Caeleb Dressel came as close as he could possibly get to becoming the first man ever to break 40 in the 100 yard freestyle. Dressel hit the wall in 40.00, dominating as he shaved nearly half a second off the American Record. Now a senior, Dressel has one last shot to break this barrier. He’s had some incredible performances this year, so nothing seems out of the question for him, and he seems unstoppable.

We have several returning finalists in this race in NC State’s Ryan Held, USC’s Dylan Carter and Santo Condorelli, Indiana’s Blake Pieroni, Texas’ Brett Ringgold, and Stanford’s Sam Perry. Of the returners, most of them don’t seem like they’ve shown all of their cards so far this year. Pieroni has been a best time this season, knocking a hundredth off his time at Big Tens.

We could see some new faces in the final this year. Texas’ Tate Jackson had a very strong Big 12s. He took down the conference record and dropped a full second and became the 9th fastest performer ever in the event. Teammate Townley Haas, the reigning 200 free champ, will look to make it in after winning the B final last season. He’s seemed to develop more speed over his career, and the 100 might be more central to his event focus now than it has been in years past. Cal has a strong sprint group and should get someone in between Justin Lynch, Ryan Hoffer, and Michael Jensen.

Auburn’s Zach Apple had big potential after his success during the long course season last summer. Apple has already dropped nearly a second from his best this season. He and teammate Peter Holoda are both top 8 seeds. NC State also has potential to get multiple men in the final. Aside from Held, they’ve also got Justin Ress, who, like Apple, had a great season last summer, and Jacob Molacek. Alabama’s Robert Howard is another guy who had a great summer season and could have a big breakthrough here. Minnesota’s Bowen Becker, the 5th seed, had a fantastic performance at Big Tens and is in the running for a finals spot as well.

Odd Farris is scared to race the 100 against THE GOAT NCAA SWIMMER OF ALL TIME. He ducked CD and is racing the 200 back…sad thought he was a competitor.

I guess you are unaware of his ability to swim the 200 back…which he can win. If I’m being conservative, he can probably go somewhere around a 1:24.99, as long as he remembers to wear a tech suit for finals.

Pretty sure he went the 131 in a drag suit, with two black chutes at his waist, and a 20 pound brick strapped to his chest. The kids a modern day secretariat

Like I don’t know Farris can swim a great 200 back, I mean he is seeded 2nd and will probably finish top 4. The point is when a real man has a chance to beat the best NCAA swimmer of all time in his last individual event (if CD has a fever, misses 2 turns and his goggles fall off when he starts) he should go for it. To not do so smacks me as somewhat weak thats all. Of course Dean probably wanted to swim the 100 perhaps his coach made the call?

Farris will break 40 on the first 100m of his 200. What’s the point of even swimming the individual at that point?

I think Tate can hold off Held. But, it might come down to a few hundreths…

So, after the event, you’ll look to post that he “held off Held”?

Or maybe it woll be Held Holds On

I think Tate was rested for Conference champs, as he didn’t get a NCAA cut at the Texas Invite. I see him adding here, similar to what he did as a freshman.

I also think it’s optimistic to expect Tate to drop any more time. Brett Ringgold though… he was half a stroke off Tate at Big 12s with a full beard and chest.

I think he could turn some heads.

Yeah no Tate is going to get destroyed. Rip my pickem

Yeah I am completely wrong

Not sure why, but thats what you get for being the most rapidly improved team in the NCAA

Them young wolfpack are ready to feast on some old longhorns and bears.

Hi. Not a hater. Wouldn’t be surprised if he made it in. This is just an extremely tough call as there could be a bunch of 41s that don’t make it in.

And then get chewed up by a Gator in this race.

Underestimating Justin Ress has made many people look silly over the past few years.

For going a rolling start of 40.8 at ACCs, unrested with hair….I have Ress in my top 4 pickems.

A small sliver of me has half a mind to put him as an upset to Held…since at Worlds last summer he was lights out in the Backstroke sprints…. but I believe in Held too much to risk my pickems LOL

Sleeping so hard on Hoffer

When he’s the only swimmer with seasons best of a 42 that’s been predicted to make it in to the A final, they’re not sleeping on him.

I think Justin Lynch gets in the A final. He’s been swimming lights out all year.

Blake Pieroni is too low on the list for me. He’s been on fire this year with his beard. I have him in the top three.