2017 U.S. Worlds Trials Previews: Uncertainty Only Certain Thing in 50 Back 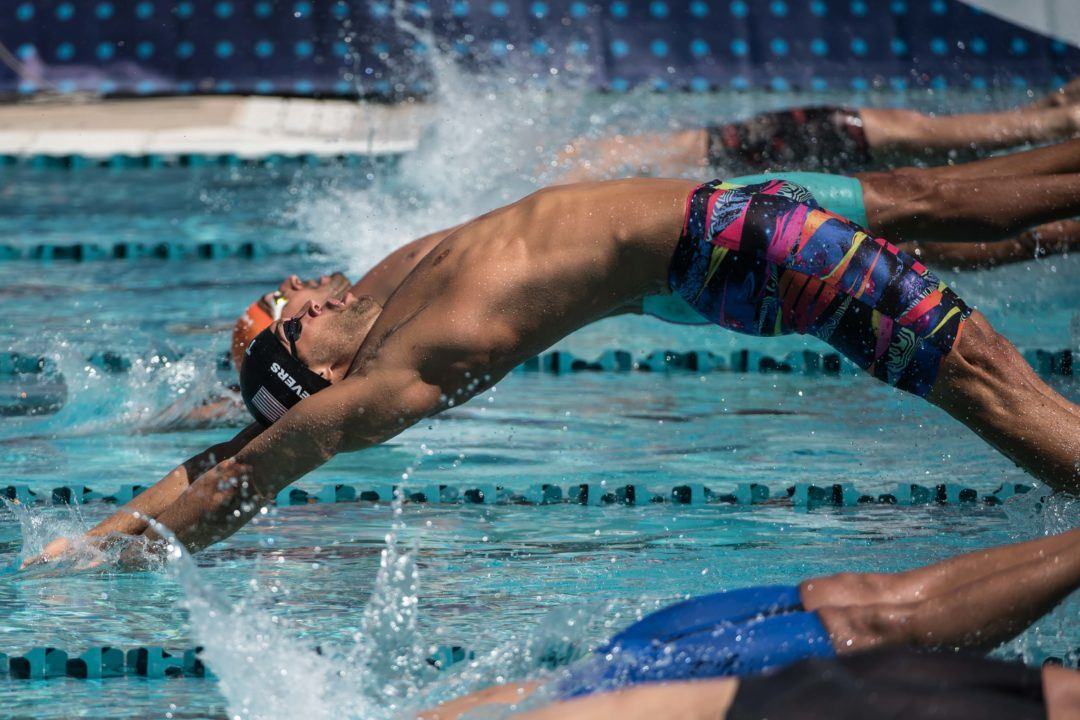 With Ryan Murphy practically a lock to win the 100 and 200 backstrokes, the 50 might be Matt Grevers's best chance for a win next week at World Champs Trials. Current photo via Mike Lewis/Ola Vista Photography

If we’re being honest, trying to predict the 50 strokes is nigh-on impossible.  They haven’t been seriously contested at the major U.S. domestic meet for years.  Even though we  now have the psych sheet, there’s still no way of knowing who will  actually going to compete next week, and many of the swimmers who might enter don’t even have a recent 50 time in LCM.

Having said all that, there’s no doubt that the 50s are fun, and if everyone who’s entered actually makes their splash, the men’s 50 backstroke could be one of the closer races of the meet.

Ryan Murphy is the Olympic gold medalist in both backstroke events, the world record holder in the 100 back, and has the fastest 50, 100, and 200 backstrokes ever in yards.  He hasn’t competed in the 50 recently, but sports a lifetime best of 25.03, from the 2013 Nationals.  However, he split 25.13 to his feet during his world record swim leading off USA’s medley relay in Rio, so if he swims this, he should be very comfortably under 25.

If anyone is going to upset Murphy, it figures to be Matt Grevers.  The 6’8″ (2.03m) veteran took 1st in this event at Nationals in 2013, and earned a silver medal in Kazan with a 24.61.  He’s looked good in the 100 back this season, and at 32, he has a solid combination of “old man speed” and international experience in this event that makes him a clear favorite for top two spot.

NC State’s Justin Ress  was one of the breakout college standouts of 2017, and he dropped a 24.89 at the SwimMac Ultraswim event a few weeks ago.  That’s actually the fastest time among US swimmers this year, and 2nd fastest since 2015, behind only Grevers.   Ress should give Grevers and Murphy a challenge at the very least, and should they choose not swim this event, Ress probably becomes the favorite.

Murphy’s former Cal teammate and training partner Jacob Pebley used to be pegged as a 200-only type, but we’ve been seeing increased speed out of him over the past couple of years, and he could factor in this event as well.  He finished 3rd in the B final in 2013 with a 25.72, which is still his lifetime best.

You can argue that Michael Andrew’s training style limits his abilities in the 200m events, but it’s hard to argue with the results in the 50s.  He’s the reigning junior world champion in this event, but he’s also entered in the 100 fly and the 50 breast on the same day.  If he does stick with this, his best time of 25.13 puts him in right in the thick of the A-final, and we’ll have to see whether or not he’s eked out a few tenths of improvement over the past two years.

Almost any elite-level college backstroker can figure into things here.  Georgia’s Taylor Dale actually has the 3rd-fastest time among US men this season, courtesy of a 25.07 from the Mare Nostrum meet.  John Shebat had a breakout NCAA championship meet, finishing 2nd behind Murphy in both individual backstroke events.  Kyle Darmody won the C final at the 2013 Nationals, and should be in the mix.   Bob Glover played a huge part in Indiana’s resurgence in the medley relays over the past few years, and you can’t count out guys like Luke Kaliszak, Sean Lehane, and Hennessey Stuart either.

Dark horse: Aggie Brock Bonetti has only cracked 26 once in LCM, but slipped in a sub-21 leadoff in the B final of the 200 medley relay at NCAAs this year.  If he can translate that speed into the big pool, he could make a run at cracking the top eight in this event.

Ress had a breakout college season? Why is there little to no mention on Shebat’s stellar college performance? He deserves a lot more

Michael Andrew beating Shebat, Dale and Pebly I’m not entirely sure that’s gonna happen Shebat had wicked speed at NCAAs but who knows.

I hope Grevers takes this out

I like Grevers a lot, he is one of the nicest and most Charasmatic swimmers, but I think Muprhy has this one. I say 24.5 high for Murphy