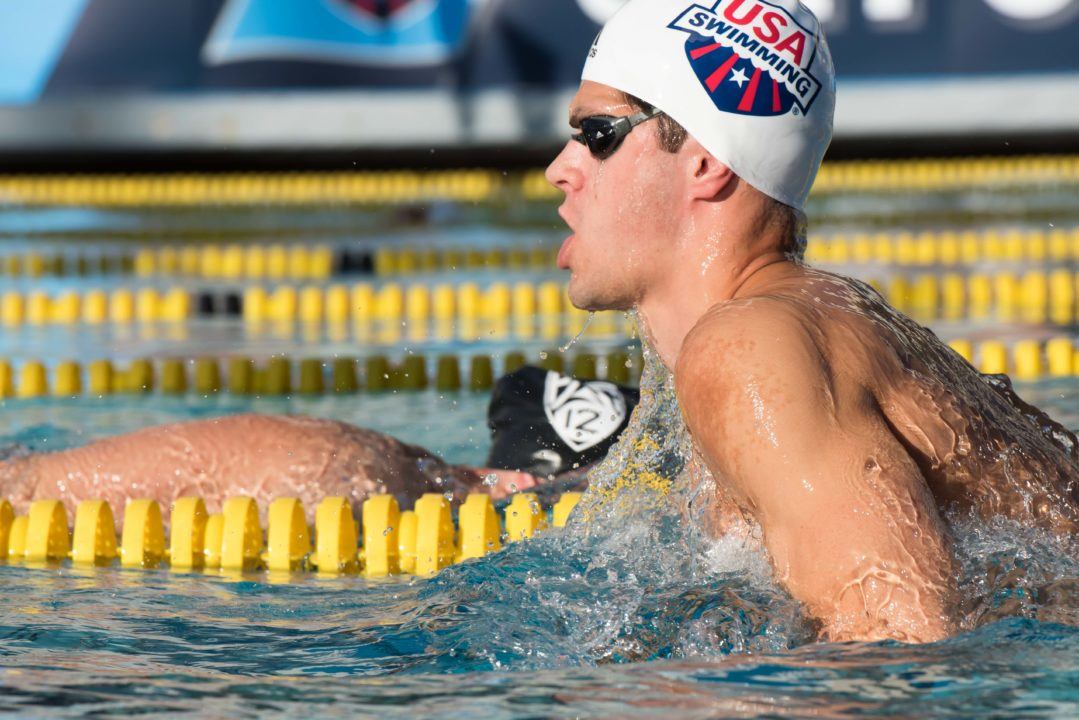 Michael Andrew did his thing in Singapore, capturing silver in the men's 100m IM in a new World Junior Record, while also contributing to Team USA's WJR in the mixed medley relay. Archive photo via Mike Lewis/Ola Vista Photography

Since the Tokyo final, Fratus has swum 3 21-point 50 frees, all 3 of which came during this past weekend’s Mare Nostrum Tour stop in Monaco.

Both veterans and fresh talent within our sport took to the Singapore stage on day 1 of the last FINA World Cup stop of the series. Entering the meet, South African Chad Le Clos and Swede Sarah Sjostrom lead the overall money lists with totals of $138,850 and $167,500, respectively. Both Olympians look primed to capture the $50,000 cluster bonuses, as well as the $150,000 series title.

Le Clos started off strong by reaping the men’s 200m butterfly victory tonight in a mark of 1:49.25 to represent the only swimmer to notch a time under the 1:50 barrier. Right behind was Japan’s Daiya Seto, who has had a successful World Cup run already with 200m IM and 400m IM World Cup Records in earlier stops.

Securing bronze in the men’s 200m fly race was Japan’s Masaki Kaneko, who stopped the clock well behind the top 2 finishers in 1:52.23.  USA’s 15-year-old Carson Foster made the final, finishing in 1:56.10 for 8th place overall.

Kaneko earned bronze earlier in the men’s 100m backstroke race, making it a 1 & 3 finish in that event for Japan. Leading the pack was mainstay Ryosuke Irie, who registered a time of 49.88 for gold in a new personal best.  His mark also falls less than a second from American Matt Grevers’ World Record of 48.92 in the event. China’s powerhouse backstroker Xu Jiayu touched in 50.05 for silver. Foster was also a finalist in that 100m backstroke, touching in 52.17 for 8th place.

The trio of terror that is Ranomi Kromowidjojo from Netherlands, Sarah Sjostrom from Sweden, and Cate Campbell from Australia slayed the women’s 100m freestyle once again, with the Aussie taking the top prize in Singapore. The gold has rotated among the 3 dynamos throughout the World Cup, but C1 landed on top to end the series, taking the title in 50.85. That registered as the green and gold Olympian’s 2nd career best, as well as the 5th fastest mark ever recorded in the event.

Sjostrom was the other swimmer to land under the 51-second threshold in 50.99, while Kromo wrangled up bronze in 51.65. 50m freestyle Olympic champion Pernille Blume of Denmark was also in the race, finishing 4th in 51.94, while America’s Lia Neal was 5th in 52.46.

China’s Li Bingjie was on fire once again in the women’s 800m freestyle, nearly surpassing her countrymate Wang Jianjiahe’s junior world record in the process. Tonight, Bingjie scored a winning time of 8:12.36, just .06 off of Wang’s time of 8:12.30 from Beijing.

The women’s 200m backstroke saw a young star make the podium, as American Regan Smith earned silver in a time of 2:02.70, just half a second off of her own personal best from Tokyo. Although that fell about a second behind winner Emily Seebohm‘s mark of 2:01.41, tonight represents just the 2nd time Smith has been in the 2:02 range, crushing the 2:04.77 the teen was at this time in 2016.

Smith also made her mark tonight by beating Hungarian dominator Katinka Hosszu for a second consecutive 200m back race. Hosszu finished in 2:04.60, well-off her World Record and slower than Tokyo, where she earned bronze in 2:03.56.

Finally, American Michael Andrew crushed a new World Junior Record time in the men’s 100m IM to take silver in the race behind winner Vlad Morozov of Russia. Morozov took the gold tonight in 50.49, just .19 off of his own 50.30 world record from 2016. Andrew finished a little more than a second behind in 51.65, beating the FINA-listed WJR of 51.86 from Beijing, even though Andrew had been faster when winning the World Championship title in Windsor in 51.84.

Andrew was also a member of the American World Junior Record-breaking mixed medley relay. Although they finished 5th overall, with Australia, Brazil, Netherlands and China finishing in respective 1st through 4 place positions, the American foursome of Alex Walsh (27.52), Andrew (26.02), Smith (26.02) and Trey Freeman (22.35) collectively clocked a time of 1:41.91 to establish a new WJR standard.

So exciting seeing Andrew down that relay record by himself

don’t be glib. the title of the article was because he was the only one to down multiple records. had smith gone a wjr in 200 back they would have surely titled it about both of them.

I sincerely doubt that

They probably would’ve given them both their own respective articles. No need to argue over a hypothetical scenario

Seebohm has been experimenting with a weird pacing strategy for the 200 back. Last stop she negative split by a second. She basically even split this race.

Didn’t Cate set the 100free world record earlier this season in a 50.1?

Right, 50.25 in Adelaide. So tonight’s outing is her 2nd career fastest. FINA results still list Sjostrom’s 50.58 from Eindhoven as WR on its results page.