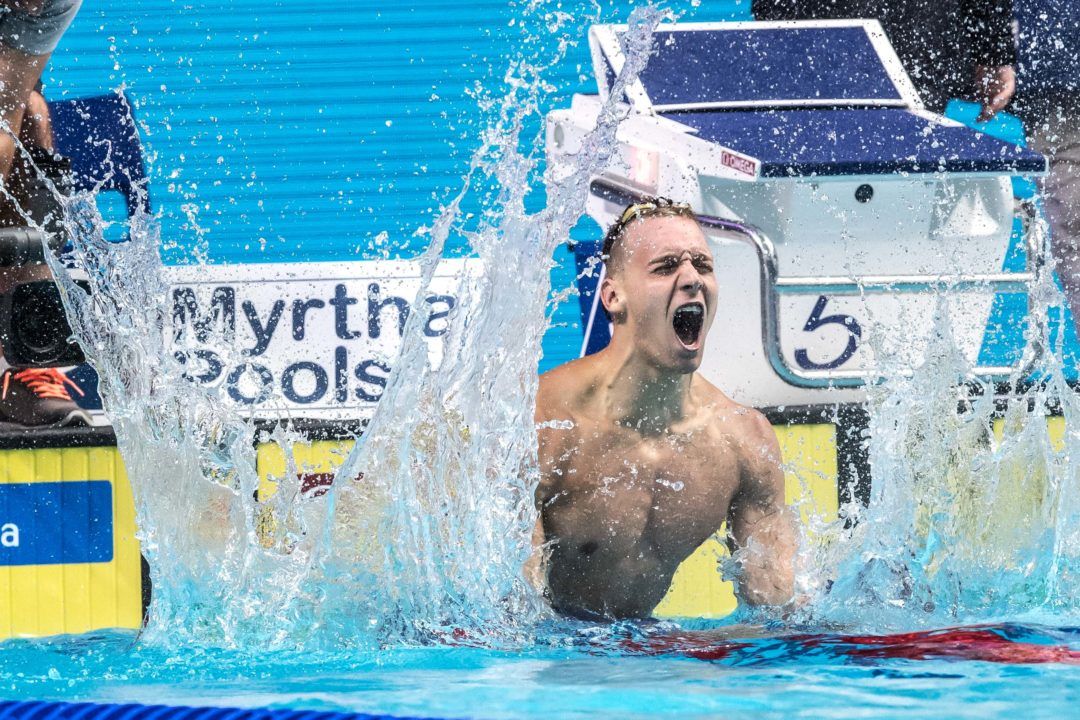 The sixth prelim session from Budapest will be the busiest of the meet, save day 1, with six events scheduled. We’ll start off sprinting, with the men’s 50 free, women’s 50 fly and men’s 100 fly up first, followed by the women’s 200 back, men’s 4×200 relay, and the women’s 800 to close things out.

After winning gold by a mind boggling seven tenths of a second in the men’s 100 free, Caeleb Dressel certainly has the momentum swinging his way heading into a very busy end to the meet. Providing he advances through, Dressel will swim three rounds of 50 free, three rounds of 100 fly, and probably one 100 freestyle on the mixed relay over the next four sessions.

He’ll start with these 50 free prelims, where he’ll be in lane 5 of the first circle-seeded heat alongside Australian Cameron McEvoy, who was shut out of the medals in the 100 free in 4th place.

100m runner-up Nathan Adrian swims in heat 12 alongside Russia’s Vlad Morozov, as well as Brazilians Bruno Fratus and Cesar Cielo who will be back in the water for the first time since winning 400 free relay silver on day 1.

In the last heat we’ll find 50 fly champion and fastest man in the world this year Ben Proud, along with 50 fly bronze medalist Andriy Govorov and 2016 SC World champion Jesse Puts. Finland’s Ari-Pekka Liukkonen (21.58) and Poland’s Pawel Juraszek (21.68) will also be in the mix after obliterating their respective national records this season.

Next up will be the women’s 50 fly. The first circle-seeded heat will be headlined by Ranomi Kromowidjojo, and out in lane 0 will be 50m free Olympic gold medalist Pernille Blume, who could provide some outside smoke. Both Kromowidjojo and Blume have swam well here and advanced to the 100 free final tomorrow.

Approximately 15-20 minutes after the men’s 50 free wraps up the men’s 100 fly will get underway, where Dressel will be back in the pool in heat 6. Joining him will be China’s Li Zhuhao, who holds the Junior world record at 51.24. After Dressel split 49.92 on the mixed medley relay, he’s certainly capable of challenging for the gold medal, but the proximity to the 50 free could be too close come the final.

There will be just four heats in the women’s 200 back, with Emily Seebohm starting things off in heat 2 as she looks to defend her title after taking 3rd in the 100. Kylie Masse, the winner of the 100, will swim alongside her.

17 countries will race over two heats in the men’s 4×200 free relay, with favorites Great Britain and the U.S. in lane 4 in both heats. Lineups will be announced prior to the session.

Four heats of the women’s 800 will wrap things up, with the top eight advancing to finals on Friday.

The first of two circle-seeded heats sees Leah Smith, Boglarka Kapas, Ariarne Titmus and Simona Quadarella in action, while Katie Ledecky will swim alongside Mireia Belmonte and Li Bingjie in the last heat.

These next two days are going to be brutal for Dressel. I wish him good luck.

Yeah, and good to anyone in a final against him…

Li Zhuhao has been off by a lot compared to his in-season times and his times from last year.

At most he’ll make semifinals, but I doubt he’ll make the finals. Not good for the Chinese medley relay.

I think Chad Le Clos is the favorite for the 100 fly right now due to his good 200 fly and his limited schedule, and Dressel is probably going to get either gold or silver. Bronze seems to be open between Joseph Schooling, who seems a little bit off, Mehdy Metella, Laszlo Cseh, and Kristof Milak.

As I’ve said before, I don’t think Schooling is having a rough meet (apart from a shaky 100 free, which he attributed to not moving around the day before, lying in bed etc and as a result having a rough morning), but he has lowered his asian record twice in the 50 fly, made the final and placed 5th and improved on his 7th place placing from 2015 (with a time that would’ve won then). Plus, his 48.86 in prelims of 100free isn’t too had for someone who doesn’t train freestyle and wings his freestyle races (see SEA Games 2015 article) although it was pretty far off his 48.27 national record, and Schooling himself called his 100 freestyle timing in… Read more »

I guess no 200 free relay for Dressel then. Wonder who will they put on the prelims of the relay. The coaches will definitely pull in those that did not earn a spot just like the women’s side . All they need to do is to qualify top 8.

I hope both will be in prelims! Most likely it will be Dwyer, Smith, Conger, Litherland. And fastest goes to final with Haas, Perioni and Grothe.

I don’t know if they would put Grothe in the final without a prelim race. I would have more confidence in Dwyer tbh.