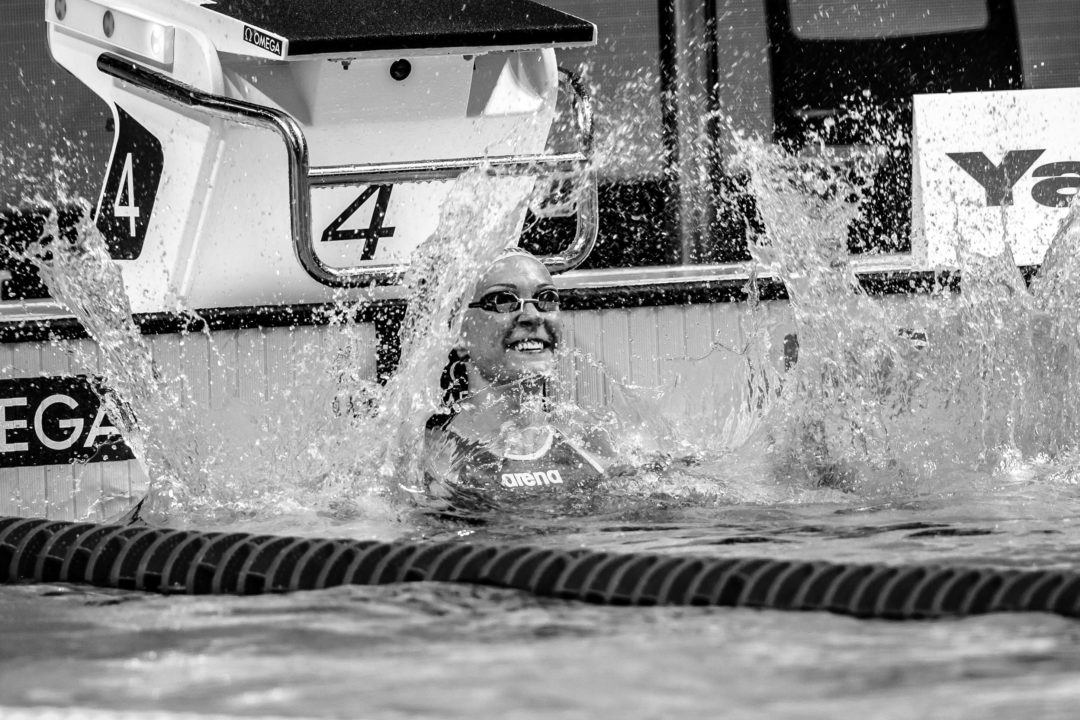 Sarah Sjostrom will have a double on day 6, starting off with the 100 free final. Current photo via Mike Lewis/Ola Vista Photography

Day 6 finals from Budapest features an absolutely stacked event lineup with five finals and four sets of semi-finals on the docket.

Leading us off will be the ridiculously loaded women’s 100 free final, where all eight swimmers hold lofty credentials.

Sarah Sjostrom will be looking to lower her 51.71 world record from lane 4, and she’ll be surrounded by Americans Simone Manuel and Mallory Comerford who will both be hunting down that 52.59 American record.

Next up will be the men’s 200 back final, which should be an interesting one with just one second separating the top seven seeds.

Ryan Murphy may have been the favorite coming in after claiming Olympic gold last summer, but both 100m winner Xu Jiayu and 2015 bronze medalist Evgeny Rylov both look capable of the win as well. Xu was out like a rocket in the semis and seemed to die, so will see what kind of tactics he has for us in the final.

All three of these guys were sub-1:55 in the semis, and Kliment Kolesnikov (1:55.15) and Jacob Pebley (1:55.20) were right there, so expect the medals to come from that group of five. However, if Hungarian Peter Bernek (1:55.79) can draw energy from the crowd he could deliver a special swim.

Next will be the women’s 200 back semis, where the crowd will be ready to erupt again when Katinka Hosszu hits the water for the first heat. She’ll have Hilary Caldwell and 15-year-old Regan Smith alongside her.

The next semi will be headlined by all three 100 back medalists: Kathleen Baker, Emily Seebohm and Kylie Masse.

Caeleb Dressel will then hit the water for the first time in the 50 free semis, holding lane 4 in the first heat along with Ben Proud, Vlad Morozov and Nathan Adrian.

Bruno Fratus, who led the heats in 21.51, will center semi 2 with his countryman Cesar Cielo, Aussie Cameron McEvoy and Kristian Gkolomeev, who unloaded a new Greek record of 21.69 in the prelims.

The women’s 200 breast final will have top seed Yuliya Efimova and American Bethany Galat, who hit a new best time in the semis at 2:21.86, in lanes 4 and 5. Lilly King finds herself on the outside in lane 8, but could provide some theatrics if she decides to go out for it. Taylor McKeown will also be dangerous from lane 3.

Dressel will have about half an hour before he graces the water for the second time of the night in the 100 fly, where he gains an extra couple minutes after drawing the second semi.

The first semi will feature Joseph Schooling, Chad Le Clos and Laszlo Cseh, along with Italian Piero Codia, who was the faster than all of them this morning in 51.09.

Dressel will then hit the water from lane 4 in the second semi, and….who knows what he’ll throw down. He popped a 50.08 in the prelims, the 4th fastest swim ever and fastest in a textile suit by over three tenths. Newly minted British and Junior world record holders James Guy and Kristof Milak will have lanes 5 and 3.

Sjostrom, Kromowidjojo and Oleksiak will all be back in the water for the women’s 50 fly semis. Kelsi Worrell swims alongside Oleksiak in heat 1 after tying her 25.65 PB, as she sits just 0.15 outside the American record.

Sjostrom could challenge the championship record of 24.96 after an easy 25.25 in the morning, while Kromowidjojo and Rikako Ikee will have lanes 3 and 5 in the semi 2.

The men’s 200 breast final will be the last individual event of the day, and as we saw in Rio, the medals could come from any of the eight lanes. However, look for them to come out of the top four, who were all sub-2:08 in the semis.

Anton Chupkov leads after a devastating back half yesterday in 2:07.14, while Japan’s Ippei Watanabe and Yasuhiro Koseki will no doubt be in the mix, and Ross Murdoch has also looked strong through the semis. We also can’t count out Kevin Cordes who has been 2:07.4 this year.

Wrapping it up will be the men’s 4×200 free relay, which will look different than usual with the Americans way out in lane 1. They were far from impressive this morning, so it’ll be interesting to see if they make any changes outside of the expected Townley Haas and Blake Pieroni additions.

Australia, Great Britain and Russia were the top three this morning and will have the middle lanes. Lineups will be announced closer to the session.

Wouldn’t be surprised if both Dressel and Schooling dip under 50 tonight, but I think Schooling’s only gunning for sub-51 tonight in the semis

I would not sleep on what Milak might do.. Maybe not sub-50 but he can go a 50 mid maybe? And who knows what Le Clos have..

USA realistically clear favourites. GBR the only realistic competition but their peak weapon (Peaty) is essentially neutralised trying to stem the damage from backstroke then USA takes the game away from them on fly.

I’d make AUS time around 3.32.90 (not 3.30.05). They’re not realistically in the game as they lack finalist quality performers on the middle legs.

Could be a night for Russia.