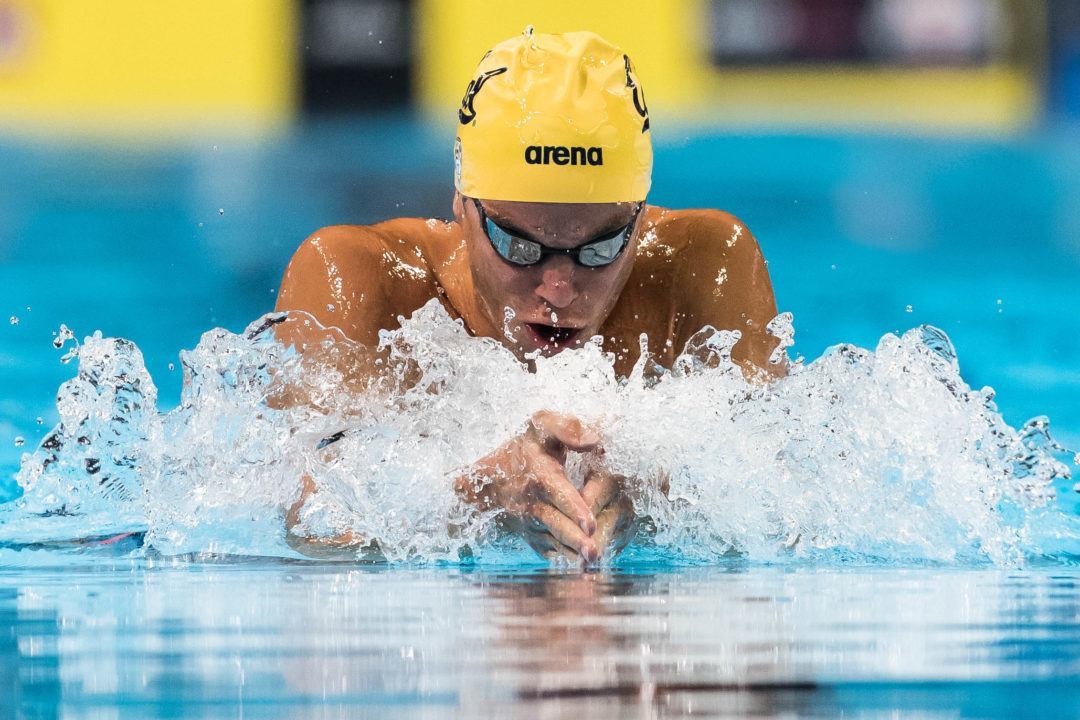 Josh Prenot scared the world record in Omaha, and he could scare the defending Olympic Champ and defending World Champ with another lights-out swim in Rio. Current photo via Mike Lewis/Ola Vista Photography

Daniel Gyurta, the Hungarian who garnered Olympic silver as a 15-year-old at the 2004 Games, set the Olympic record during prelims in 2008 only to finish 5th in the final. In 2012, however, he resurged for Olympic gold with a 2:07.23 in world record-fashion. Gyurta returned in 2013 to earn the world title in this event, though the now-27-year-old is losing some of his sharpness. In 2015, it was Germany’s Marco Koch, the 2014 European Champion, who stole the show with a 2:07.47, a meet record at the time. Gyurta finished third in 2015, and chose not to race at the 2016 European Champs to focus on Rio.

This event has been crowded under the 2:08 mark since 2012, when Japan’s Akihiro Yamaguchi nearly took the 200 breast into 2:06 territory. Since, European names like Gyurta, Koch, Ross Murdoch, Michael Jamieson, and Andrew Willis (the latter three all from the U.K.) have dominated the endurance breaststroke race. That is, until now.

Kevin Cordes raced his way to SCY American records in his impressive NCAA career, and looked to be the next breaststroke star for the Americans after the retirement of Brendan Hansen. Cordes faltered in his first international appearances, DQ’ing the USA’s 4×100 medley relay at the 2013 World Championships and then DQ’ing again in the individual 100 breast at the 2014 Pan Pacific Champs. He got back on his feet in 2015, winning a surprise silver medal over Gyurta in the 200 breast, and swam very well at the 2016 U.S. Trials with a new American record in the 100 and a second-place finish in the 200 breast. Cordes, now under the tutelage of the great Sergio Lopez, has certainly made his way into the category of “medal threat” for these upcoming Olympics.

Cordes, however, was left in the dust at the finish of the 200 breast in Omaha. Cal’s Josh Prenot made his move at just the right time, jetting past Cordes (and the American record) with a field-best 32.98 final 50 to win it in 2:07.17. With that swim, Prenot might have just begun his journey to stardom. Up until that race, Cordes had broken the 100 breast American record and swum a 2:07 in the 200 breast semifinals, and had looked ready to handle the international field in the breaststrokes as the clear top American. Prenot, now, is well within striking distance of the world record and is capable of bringing glory back to American breaststroke, which hasn’t struck Olympic gold in this event since Mike Barrowman in 1992.

Other than his teammate Cordes, the defending Olympic Champion Gyurta, and the defending World Champion Koch, Prenot could be up against Scottish breaststroke star Ross Murdoch. 22 years old, like Prenot (though Prenot turns 23 later this month), Murdoch was recently crowned European Champion at the 2016 Euro Champs. Murdoch, with a 2:08.33, took down Koch in a close battle. The two were separated by hundredths at the finish (Koch was 2:08.40). The problem? Murdoch was actually 3rd at British Olympic Trials and presumably will only be in Rio to swim the 100. There’s still a chance the British team finds a way to get Murdoch into the race, but it would take some crafty lineup work, with Andrew Willis and Craig Benson currently holding the two spots and not swimming anything else in Rio.

It was Willis who swam a 2:08.08 at the British National Champs this spring, a few tenths ahead of Murdoch’s season best from Euros. Willis is used to the number four. After touching 8th in the final in 2012, Willis was 4th at the World Champs in 2013 and 2015, and 4th again at the 2014 Euros. If he’s going to break the chain of near-misses from the podium in Rio, he’s going to have to be well under 2:08.

Japan’s duo will be competitive in this event. After all, Japan has produced world record holder Yamaguchi as well as the legendary breaststroker Kosuke Kitajima. Leading the nation will be Yasuhiro Koseki, who dropped a 2:08.14 at the Japan Swim 2016. He touched ahead of Ippei Watanabe, who was 2nd in 2:08.83. Watanabe was once the World Junior Record holder in this event, a record that now belongs to Russia’s Anton Chupkov at 2:09.64.

Chupkov, meanwhile, has continued to whittle down his 200 breast– he dropped a 2:08.53 at the Canet stop of the Mare Nostrum tour in early June. If he makes this final, he’ll easily be the youngest, as he’s three years younger than Murdoch.

The focus for the podium will be on a battle between the older veterans (Koch, Gyurta, Willis) and the new blood in this event (Prenot, Murdoch, Cordes). We saw multiple Olympic champions falter in their best events in Omaha, and we could see Gyurta miss the podium altogether in Rio.

Dark Horse: Kazakhstan’s Dmitriy Balandin. At 19 years of age, Balandin completed a triple-gold performance at the 2014 Asian Games, taking home titles in all three breaststroke races. In the 200, he broke Kitajima’s 12-year-old meet record with a blazing fast 2:07.67. He hasn’t broken 2:09 yet this season, but he could be saving up for something big this summer.

You say “Prenot is clearly within striking distance of the World Record” and then you predict him to gain time and be off the podium. Why the love/hate relationship? I’m confused by this logic. I think he has all the momentum behind him and will do big things on the biggest stage. Prenot wins in 2:06.9.

It’s journalism. Prenot clearly is within striking distance; that’s a fact. But it’s the author’s opinion that Prenot will add a little bit of time.

I personally love watching Prenot swim. I watched him win the 200 breast in Omaha and I was so sure I was about to witness a WR. It was electrifying.

That said, he had to have pulled out all of the stops for Omaha. He was in no way a lock for an Olympic berth. Yeah, he’s very close to the WR, and if he goes faster than he did in Omaha I wouldn’t be very surprised. But that was a huge swim for him, an emotional swim, and I don’t know if he can turn around and do that all again in Rio.

It’s not his first stellar swim to be fair, Karl. Prenot has been making 2:08 look easy for the last year. Even if he’s not a “lock” for gold, neither is Koch. At the end of the day, these predictions are just that: predictions. I’m predicting Prenot for the Gold.

I agree with you; to a certain point…
While he definiteley put everything into that one race, it seems that emotion did not control his race like it did with your average swimmer. He was out 4th in both the 1st and 2nd 50. It didn’t matter that Cordes was nearly a body length ahead, Prenot stayed true to his own race strategy, there was no sign of panic from him. Personally, I feel like he is comparable to Scott Weltz 4 years ago, Weltz was also someone who had nothing to lose and put it all in the 200m breast. Yet, he swam his own race no matter how intimidating or fast his competitors were. In the end,… Read more »

I thought Murdoch didnt qualify for the 200 breast at british nationals?
I like the fact that this is about the first prediction where not everyone will break his/her PB in the final … but i think the final will be much faster and it will very likely take a WR to win and sub 2:07.50 for a medal.
I think the medals will be between Gyurta, Koch, Prenot and Cordes, in my opinion gold will be between Prenot and Gyurta and Gyurta will probably take it.
The other spots in the final should go to 4 out of the 2 brits, the 2 japanese, Chupkov and maybe Balandin. I think in no other event the final… Read more »

Willis and Benson qualified for team GB. Shame really, Murdoch could have challenged for the top spot.

Top spot of what? He shouldve made the team, but there is no way that he couldve won gold in Rio.

I would have wagered that he could have, but there’s no point….

Did he win a medal at 2013 world championships or 2015 world championships? Did he finish top 2 at the british trials? Did he swim sub 2:08 in the last two years?
What was his best time outside of GB? Did he ever swim his best time of the season outside of GB? In 2012/2014/2015/2016 he set his best time in Britain, but i dont know about 2013.
We probably wont find out, but i dont really see a reason to think that he could swim 2:07 low in Rio. Mens 200 breast at the european championships was his only chance for a gold medal (at least in my opinion). He knows that he cant beat Peaty (or… Read more »

When Koch went his 2:07s earlier, I doubt he was fully tapered/rested, and unless he screwed up his preparation he will be faster in Rio. I do agree that Prenot was probably full tapered for trials and will most likely add time. Gyurta is complete wild card, While he has the experience he was not good compared to his past self in 2015 and has been nowhere 2016. Cordes is all over the place and may break the WR in the Semi than finish in 6th in the final. He needs to learn how to pace himself through rounds. I like Balandin as a dark horse, he may surprise like he did in the Asian games.

Prenot has had a ton of practice tapering and retapering this year. I am not worried about that aspect for the U.S. because the people who have made the team are the best of the best, and know how to retaper.

Prenot also knows how to show up when it counts. I’m expecting a helluva race between, honestly, the top 5 or so.

Murdoch did not qualify for the 200. He was beaten by Craig benson

Murdoch is currently not swimming the 200 in Rio as he finished 3rd at GB trials. There’s been some discussion about whether he and Craig Benson will switch (Benson swimming the 100 and Murdoch the 200), but no word on that yet.

Would be pretty stupid, Murdoch has a better chance for a medal in mens 100 breast. I think the best would be to let Murdoch swim both, but Benson probably wont agree …