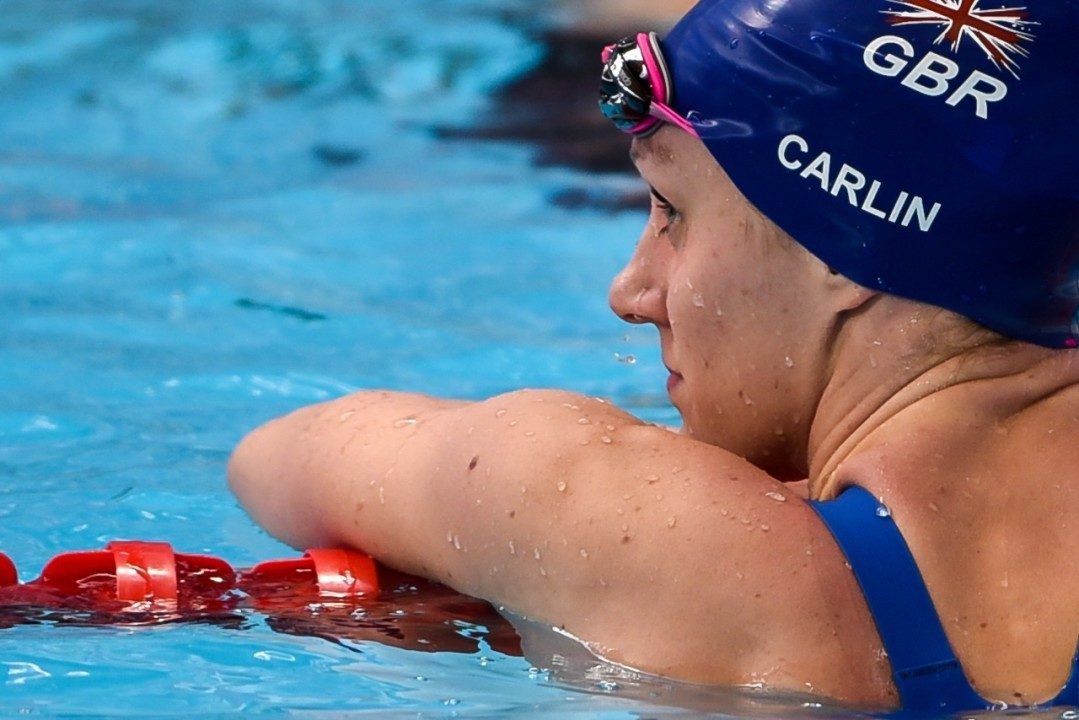 After missing out on the 200 free and 800 free individual qualifying marks, Bath University's Jazmin Carlin claimed an Olympic berth in the women's 400 freestyle race tonight in Glasgow. Current photo via Peter Sukenik/www.petersukenik.com

Even before the start of the race the field was shaken up a bit by 5th-seed Jay Lelliott scratching out of the event. Citing illness, his social media apologized to friends and family for having to pull out of the event.

But, the race came down to a 1 & 3 Loughborough University finish, headed up by Timothy Shuttleworth. Shuttleworth improved upon his 15:17.28 prelim time with an impressive sub-15-minute outing, stopping the clock tonight in 14:55.23 for the win. That time is painstakingly outside of the British automatic-Olympic qualifying standard of 14:55.11, but is well within the 2% consideration cut-off and should be enough to be selected to the Rio roster. His outing also puts the Brit just outside of the world’s top 5 in the rankings this season.

Of his race, Shuttleworth commented, “It’s unbelievable! I just can’t believe it.” Unbelievable is about accurate, as tonight marks the first time Shuttleworth has clocked a time in the 14-minute zone, as his best headed into the meet was the 15:15.74 he scored just last month.

The only other sub-15-minute time came from Perth City’s Stephen Milne, who already earned a 2016 silver medal in the men’s 400m freestyle behind James Guy. Milne won this 1500m event last year, but settled for runner-up status with a time of 14:59.10 this year, a time that will be on the bubble for an invite.

As for Milne, he said post-race, “I did my best, it was a great race but now I need to focus fully on the 200m [freestyle] tomorrow.”

Daniel Fogg was the other Loughborough swimmer to step onto the podium, improving from 4th after prelims to 3rd place tonight, registering a time of 15:01.60.

The 3rd time proved to be the charm for Bath University’s Jazmin Carlin who finally clocked her Rio-qualifying mark in the women’s 400m free after missing out on the 200m free and 800m free standards earlier in the meet. Heartbreak was in Carlin’s memory as she was stricken with mono back in 2012, which impacted her not making that team, but she persevered and got it done tonight in a time of 4:04.33, .33 of a second inside of the British automatic-qualifying standard.

Carlin, who now ranks as the 5th-fastest swimmer in the world in this event his season, couldn’t hold back the tears as she touched the wall and realized she had conquered the race and punched her ticket to Rio.

Runner-up was Sheffield’s Eleanor Faulkner, who improved on her 4:13.90 prelim time to register a 4:09.87. Alice Dearing from Loughborough clinched bronze in 4:11.35.

The top 5 men all touched the wall in a time of 1:59-X, speaking to how close the battle was from start to finish. Several men were in the mix during the sprint IM, but, ultimately, it was Loughborough University’s Roberto Pavoni who came out on top, earning a time of 1:59.20. That mark is just a hair faster than Pavoni raced in Kazan, where he earned 8th place in the event at the 2015 FINA World Championships.

However, with the British Olympic standard sitting at 1:56.82, as well as the 2% consideration set at 1:58.39, Pavoni was short of qualifying for the Rio Olympic Games. He was visibly disappointed during the post-race interview, where he commented that although earning the title of British Champion is nice, his main purpose is to qualify for the Olympic Games.

Silver tonight went to Ieuan Lloyd in 1:59.58, with University of Stirling stand-out Duncan Scott snatching up the bronze in 1:59.88, his first time ever under the 2-minute mark.

For Dan Wallace, he missed his last likely chance to qualify for the Olympic Games in an individual event, although he does have the 200m freestyle tomorrow. . After not even making the 400m freestyle final and then finishing out of the top 2/qualifying time in the 400 IM, Wallace found himself in 6th place tonight in 2:00.36.

We saw another female make a stiff British automatic-qualifying time, this time in the form of Siobhan-Marie O’Connor. O’Connor led the field wire-to-wire, attacking each leg of the race and finishing with a time of 2:09.66 to comfortably place beneath the standard of 2:10.19. She was 2:08.45 in Kazan, so O’Connor was off a little from that performance, but did enough to get the spot on the Olympic roster in the event.

Entering the meet, O’Connor already held a solid time of 2:10.32 from the Edinburgh meet last month, but her result tonight registers her now as the 2nd-fastest in the world this season. Only Hungary’s Iron Lady, Katinka Hosszu, has been faster (2:07.69).

After cranking out a new British Record in the prelims, touching in 21.65 to maintain his world ranking as 5th-fastest in the world this season. The 21-year-old Plymouth Leander swimmer finished just behind that mark tonight, touching in 21.73 to still register his ride to Rio. Ironically, 21.73 is where the British National Record had stood from Proud’s BUCS’ swim from earlier this year, so had he not already broken it this morning, he would have tied the then-national record in this splash n’ dash event.

Another Plymouth Leander swimmer made it to the podium in the form of Thomas Fannon and his time of 22.24. That wiped .3 of a second off of his morning outing of 22.54 to move up a spot in the results. Loughborough’s Andrew Weatheritt claimed the bronze in 22.38, a .08 of a second improvement on his morning swim.

Why is Britain not trialling on Olympic schedule? Not having semis impacts but more so – being out of order. Basically in Rio the 100 sprinters have to be ready on day one considering many 100ba/fliers/200 imers back up for the 4×100 free.

Of all the trials so far , this puts the GB in the oranges cart . Remember “oranges are not the only fruit”.

I think its good that most countries dont have semifinals. Australia, USA and Japan are probably the only countries that have enough depth to need semifinals. Of course that makes it much more difficult for athletes from smaller nations to repeat their times at the olympic games. In general i think that all nations should follow the olympic schedule and i really dont understand why thats not the case. German trials for example only last for 4 days, at least 2 days shorter than trials in all other nations i have seen so far and i think that makes german trials more fun to watch, because we have more finals in each evening session.

Andrew posted his PB last year and is 1 year younger than Fannon. Andrew is clearly more talented at 50 free, we can talk again if Andrew wont improve his 50 free PB this season. Its still nice to see that you got some good talents in mens free.

2:15.6 is interesting, but just as a comparison:
Last year Germany had:
2:15.02 from Mrozinski (born in 2000), although she is more of a fly specialist (2:11.19 200 fly last year)
2:13.37 from Wolters (born in 1999), although she is probably more of a back specialist (2:11.38 200 back last year)
On a global level those 2:15.6 isnt really special for a girl born in 2001, many japanese/american/chinese girls have been faster at the same age. Of course i dont want to say that the times isnt something special at a “british level” only …
Does Schlossan also have some other good events?
Large and Fannon are great talents at an international level without… Read more »

Ciara Schlosshan is a precocious talent. She has been making huge strides recently.

The Leeds group has some great young girls coming through. Georgia Coates (1999), who took similar strides at Schlosshans age and is now a 2.12/4.39 IMer and 55./1.58 freestyler, as well as a 1.09/2.26 breaststroke… Sophie Taylor was out of Leeds, Sophie Hobbah multiple winner at EYOFs last year, Amelia Clynes (1999) 59./2.11 butterflyer. Great squad pushing each-other on to fast times.

Those IM times arent really special, but 22.24 is a great time for a guy of his age. Chalmers and Andrew are at a different level, but Fannon might be the 3rd biggest talent in mens 50 free at the moment.

Job done for Ben ,abit worrying that hes continuously going faster in the heats/semis then in the final really talented boy hope the pressure doesn’t get to him in Rio can truly surprise a few

That’s what I wrote