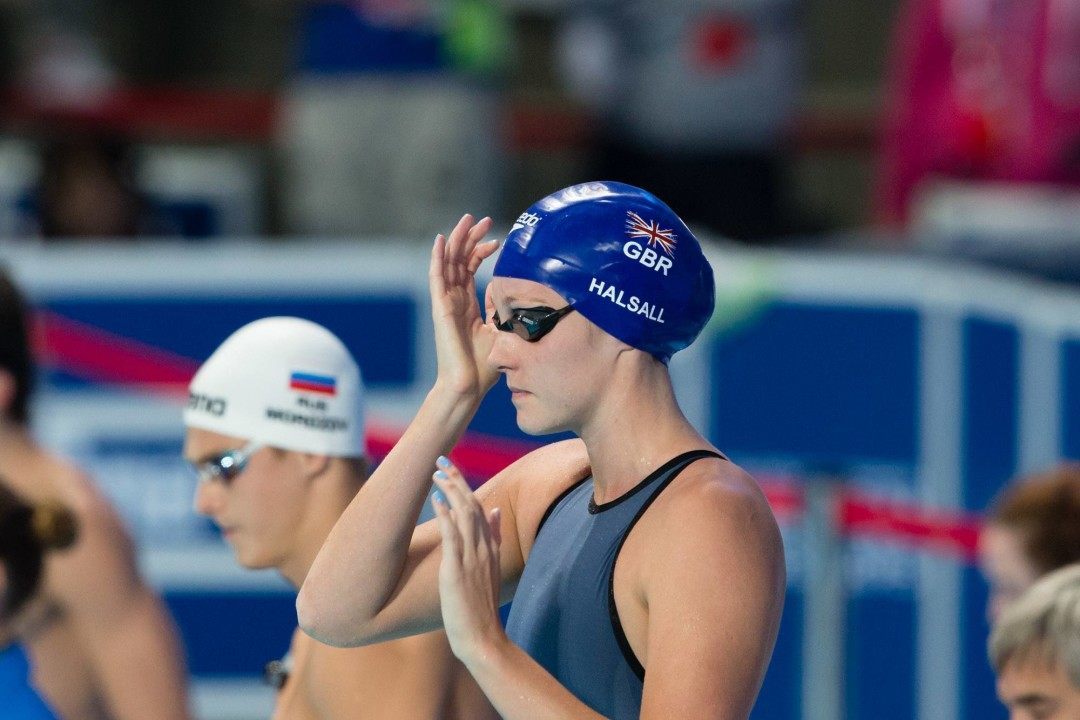 Fran Halsall is one British swimmer who earned a national title, but was unable to clock the tougher-than-FINA-A-cut qualifying standard determined by her nation's swimming federation. She'll learn on Thursday if she makes the team by secondary criteria. Archive photo via Tim Binning/TheSwimPictures.com

With the 2016 British Championships, the meet which doubled as the nation’s Olympic Trials, now done and dusted, the Brits came away with 8 individual swimmers who raced their way to the Rio Olympic Games. For the remaining swimmers who find themselves on the bubble, they have a several day wait to see if their Olympic dream will be realized.

Per the British Olympic qualification procedures, which you can review in full here, GBR can bring up to a maximum of 30 athletes, although British Swimming is not required to select that number. The total team size will be determined by the National Performance Director (NPD) at his complete discretion.

British Swimming is slated to announce the full roster this Thursday, April 22nd.

As we’ve reported, British Swimming’s Olympic qualification procedures were slightly different from nations such as South Africa or the United States, finding themselves more in line with Japan and France, both of whom set their individual event qualification times a great degree faster than the FINA A cuts.

As such, swimmers who won events in Glasgow this past week were only guaranteed their ticket to Rio if he/she met the ‘British 1st Place’ time standard. If the first place swimmer didn’t meet or exceed that qualifying time, then the athlete may still be considered for selection as long as he/she falls within 2% of the ‘British Consideration‘ standard. Runners-up also must be within 2% of the 2nd qualification time in order to be considered for selection.

Another twist lies in the fact that the British National Performance Director and the GBR Head Coach can select up to a maximum of 6 additional athletes, solely at their discretion. They aren’t obligated, but have the ability to subjectively select up to 6 more Brits to join the Rio party.

Likewise, there were 9 swimmers who either placed first or second and were within 2% of the consideration standard.

As noted also in France, there was a bittersweet overtone which plagued the British Trials all week, where swimmers who touched first appeared happy to earn a British Title, but some were devastated knowing their time simply wasn’t good enough to go to Rio.

But, British Head Coach Bill Furniss has no regrets over the stiff qualification policy. “You put five Olympic rings up there and it brings a whole tension with it,” Furniss said. “In some respects, it sorts out the wheat from the chaff. It gets the people on the plane who you want on the plane. That’s very much what we are pleased with the selection policy for.”

Furniss responds to critics of the process by saying, “If you look we have had eight automatic qualifying standards and people are saying the times are too tough. We are taking a maximum team size of 30 so we have almost got 30 per cent of the team. It is aspirational but we have got a considerable amount of swimmers to consider very carefully tomorrow.”

Typical badly managed Team GB. There’s a difference between setting high standards (the Fina A cut) and unattainable ones and all this does is stifle development rather than encourage it. Craig, Ross and Fran all post top 10 in the world times and don’t automatically qualify, what a joke. Note to writer, isn’t Chris Walker-Hebborn’s winning backstroke time also within 2% of British 1st place time?

They really need someone like “Moss” from the IT Guys to come in & help them. One sane person could decide in 30 minutes.

8 qualifiers and 22 potential others picked by administrators. Nice job. This system stinks. It disempowers the athletes and breeds corruption and back room deals. I can smell the cigars from Montana.