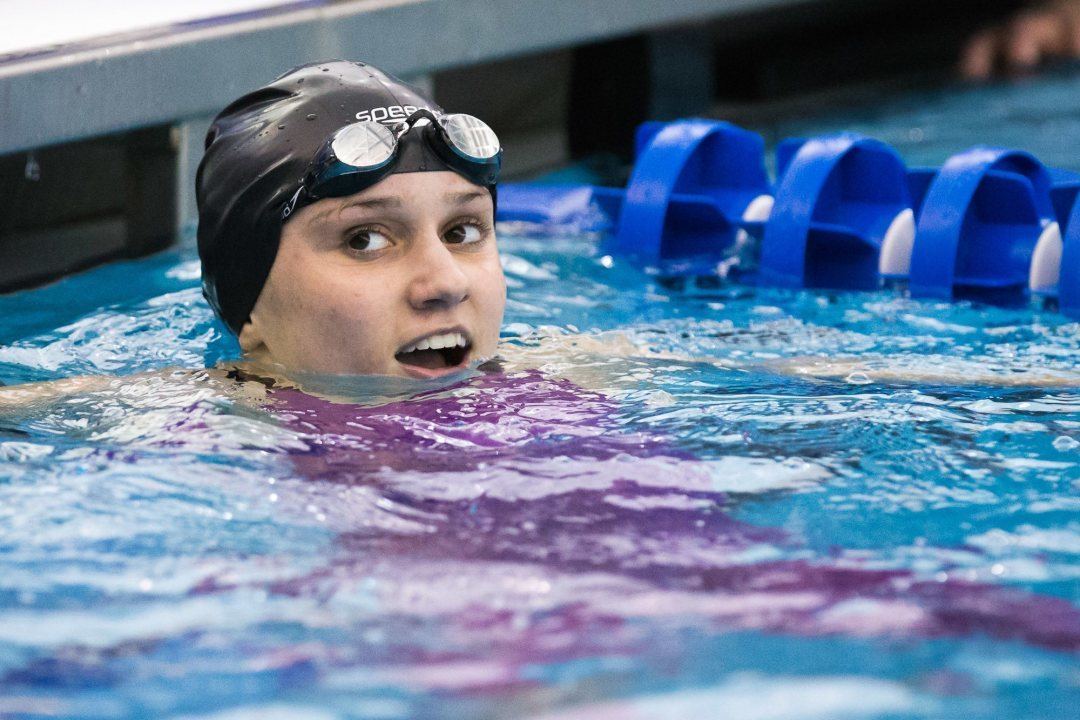 We have reached the final session of the 2015 NCSA Junior Nationals, with the usual suspects leading events out of prelims.

Andrew Seliskar has owned this meet so far in 2015, and he’s got two more top seeds out of this morning’s session. The NCAP-er leads the 200 IM and 50 free – this morning he made his first foray under 20 seconds in the short course version of that 50.

Meanwhile Ozaukee’s Katie Drabot is the top seed in the girls 200 IM. She won the 200 free and 400 IM earlier in the week. Drabot sits third in the 50 free in a very tight field. Roadrunner’s Stanzi Moseley is the top seed, with Drabot tied with Aquajet Zoe Avestruz for third. Casey Franz out of Poseidon is second.

Avestruz is the top seed in the 50 back herself, just ahead of 100 back champ Lucie Nordmann.

Tonight’s finals will also include the 800 free for girls and the 1500 free for boys. Finals are swum in long course meters.

Keep refreshing this page for event-by-event updates from Orlando.

Mason Manta Ray 17-year-old Hannah Whiteley moved up from the third qualifying spot to ultimately win the girls 50 backstroke in a touchout. Whiteley’s 29.26 just got in ahead of 100 back champ Lucie Nordmann (29.31) of The Woodlands.

Ozaukee won the B final with Autumn Haebig, whose 29.66 wouldl have been fifth in the A heat.

In the boys race, NCAP’s John Shebat put up an impressive 26.07 to take home the win. That blew out the championship final, with second-place Michael Taylor of Dynamo going 26.44.

Carpet Central’s Ethan Young was 26.57 for bronze. The last swimmer under the 27-second barrier was Alexander Martin of the Jersey Wahoos at 26.74.

Taylor’s Dynamo (GA) teammate Patrick Cusick also competed in the A final, going 27.31 for fifth. That just eked out the spot over Ryan Baker from Arlington (27.54).

Fellow Jersey Wahoo Zachary Fong was the final swimmer in the A heat, going 28.32.

The consols saw a deadlocked race at the finish, with Sam Cuthbert of NOVA and William Countie of the Marlins of Raleigh tying for 9th at 26.98.

NCAP’s Megan Byrnes took home the 800 free win, pacing the last heat of the timed final event. Byrnes took off early, swimming with a pack of swimmers for the first 300 meters but then taking the lead and powering away with an 8:41.85.

Swim Florida’s Kendall Brent had a solid, consistent run, trailing the lead dogs early but moving all the way back up to second place with an 8:44.94. Byrnes’ NCAP teammate Isabella Rongione wound up third in 8:46.40.

Pack Swim Team’s Lindsay Stone put together a gutsy race, leading the way early. She held on for fourth in 8:48.93. Dart’s Chenoa Devine rounded out the top 5 in 8:49.87.

Fresh off of wins in the 200 free and 400 IM earlier in the meet, Ozaukee’s Katie Drabot combined the former distance with the latter stroke discipline for a third win, going 2:15.59 to power away with the girls 200 IM win.

Drabot put together four really solid legs, without having the fastest split in any stroke but ranking in the top half of her heat in all four. Condors 16-year-old Carly Cummings actually outsplit the well-known freestyler Drabot on the final leg, but it wasn’t enough to pick up the win. Cummings settled for second in 2:16.61.

Cummings’ big final lap did propel her past NCAP’s Cassidy Bayer, though. Bayer was 2:16.80, taking third by just a hair.

The second-fastest time overall, though, came from the B heat, where Long Island’s Margaret Aroesty was 2:16.48 for 9th place.

Marlins of Raleigh senior Justin Ress was 2:04.93 for fourth, and boasted the field’s best free split, a tick faster than Seliskar coming home.

Poseidon’s Casey Fanz was 25.78 for fourth. The top four were the only swimmers under 26, and all four are also just 16 years of age.

Nation’s Capital’s James Jones came up with a big swim to earn the boys 50 free title. Jones, a high school junior, was 22.84, just three hundredths off his own lifetime-best, to take the win.

Nobody else could quite get under 23 seconds. NC State commit Justin Ress went 23.09 and took silver, a gigantic drop for the senior. Ress’s previous lifetime-best long course was just 24.12 from last summer.

Eighth was Cody Bollinger, who went 23.63 for Poseidon. Meanwhile Saint Andrew’s Brody Heck won the B final in a quick 23.33 over Michigan Lakeshore’s Tabahn Afrik (23.42), and in the C final, John Shebat of NCAP went the fourth-fastest time of the night, a 23.24.

NCAP 16-year-old Matthew Hirschberger came up with one more big bang swim to close out the 2015 NCSA Junior National meet. Hirschberger dropped 18 seconds from his previous best to go 15:19.23 and win the boys 1500 free. That’s now just 16 seconds off the National Age Group record set way back in 1976 by Bobby Hackett.

Hirschberger dropped the rest of the field early and ran away with things, but an entertaining race for second saw Colin Murphy of The Woodlands beat Blake Maczka of the City of Richards 15:41.31 to 15:45.90.

Cincinnati Marlin Joshua McDonald was fourth in 15:54.61, and two more swimmers scraped their way under 16 minutes, with Colton Williamson of Dynamo going 15:59.18 and Gavin Springer putting up a 15:59.86 for NCAP.

I presume it was the last SCY meet of the season for Andrew Seliskar so we can recap his accomplishments with the best times swum in each event.

Impressive credentials for the #1 recruit! Cal is lucky to have him!