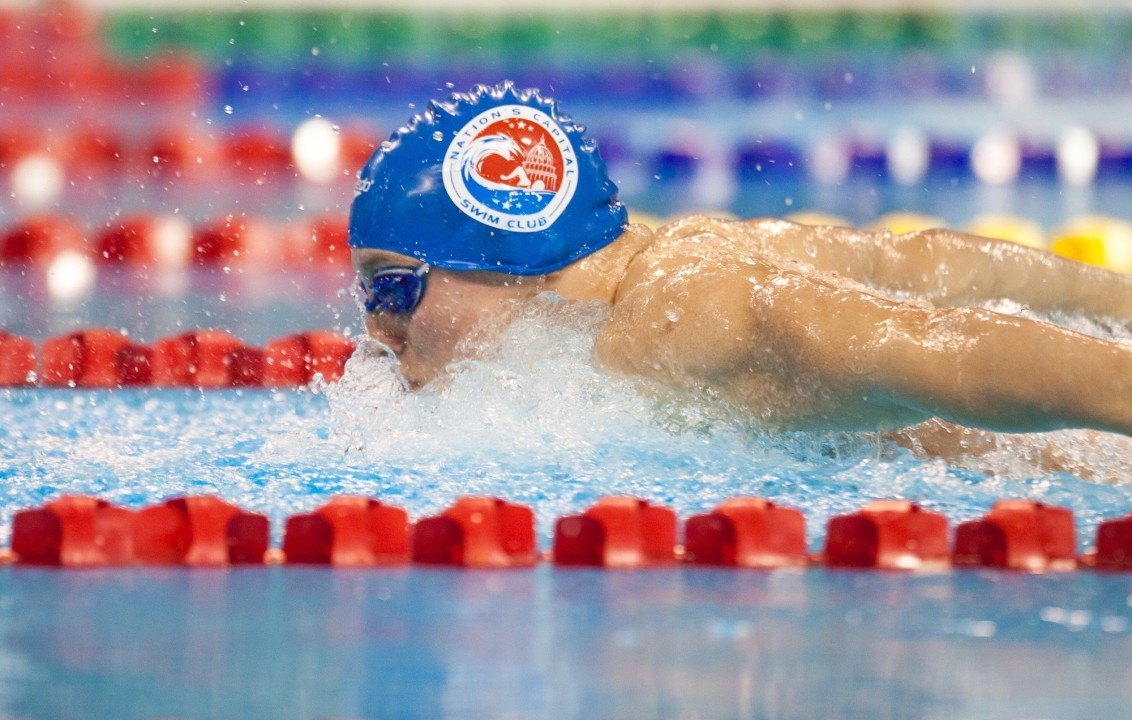 Andrew Seliskar again won twice, and moves to #4 all-time for 17-18-year-olds in the 200 breaststroke with a 2:12.82. Archive photo via Chris Tanouye, christanouye.com

Seliskar leads the 100 fly and 200 breast at the end of the night, with his teammate Carsten Vissering following him in the breaststroke.

Fellow NCAP swimmer John Shebat leads the 100 back in what’s a banner night for the Nation’s Capital boys.

Riley Scott of the Marin Pirates is the top 200 breast seed for girls. Paige Madden of the City of Mobile leads the girls 500 free, and All-Star’s Caroline McTaggart leads the girls 100 fly. On the boys side, Justin Ress is the top 100 free qualifier. The night will kick off with the girls 100 free, where 14-year-old Lucie Nordmann will look to hold off Aquajets star Zoe Avestruz.

14-year-old Lucie Nordmann of The Woodlands (TX) put up a huge time drop to hold her top seed and win the girls 100 back. Nordmann went 1:01.76, over a second below her lifetime-best in the event. That also leaves Nordmann just 1.2 seconds off the National Age Group record held by Olympian Missy Franklin.

The final 3 swimmers in the A final finished in a dead heat, with Frederick Schubert taking sixth for NOVA in 58.25. Dean Farris (58.27) and Alexander Martin (58.31) came in just after Schubert.

Top qualifier Paige Madden of the City of Mobile (AL) just touched out Ozaukee (WI)’s Katie Drabot for the 400 free title. Madden went 4:14.56, trailing at the halfway point but flying past Drabot, who finished in 4:14.67.

Rongione’s teammate Megan Byrnes was sixth in 4:17.23 as the whole top 6 got under the Olympic Trial cut in the event.

Michigan Lakeshore’s Tabahn Afrik took home the boys 100 free title, touching out Dynamo’s Knox Auerbach 50.83 to 50.92. That tops Afrik’s lifetime-best by just about a tenth, a good sign for the senior heading to Notre Dame next fall.

Two of the faster times of the night came from the B final, where Saint Andrew’s Brody Heck beat NOVA’s Townley Haas 51.02 to 51.11.

Future college rivals Riley Scott and Olivia Anderson dueled for the girls 200 breast title. Scott, a USC commit swimming for the Marin Pirates of California, just got in for the win over Anderson, going 2:32.52, just a second or so off her lifetime-best.

Anderson, a Minnesota Aquajet and Texas Longhorn commit, bettered her PR by a couple hundredths, going 2:33.40 and touching out All-Star’s Margaret Aroesty (2:33.42).

Just beyond the top three was Northern Kentucky’s Madeleine Vonderhaar in 2:33.61.

Two 14-year-olds made A final appearances – Ashley McCauley of the Marlins of Raleigh went 2:34.96 for fifth, while Grosse Pointe’s Alexis Wenger took seventh in 2:41.77. Between them was Lincoln Select’s Ashley Pales at 2:36.04.

NCAP’s Andrew Seliskar came up with perhaps the highlight swim of the night so far, going 2:12.82 to crush the 200 breaststroke field and cut three full seconds off his previous lifetime-best. That time moves Seliskar to #4 all-time in the 17-18 age group, just about two seconds off Kevin Cordes‘s NAG record.

That’s a huge drop for Seliskar, but was somewhat expected, given his outstanding short course time of 1:51 in the event from just a few weeks ago.

His teammate Carsten Vissering was second, going 2:14.46. That’s also a lifetime-best by well over a second. Vissering and Seliskar will be Pac-12 rivals next year, with Seliskar signing on with Cal and Vissering planning to join the USC Trojans.

Also in the hunt was top prelims qualifier Caroline McTaggart, who went 1:00.56 for third overall.

Those three separated themselves quite a bit from the rest of the field. NCAP’s Kylie Jordan was fourth in 1:02.03, with Westmont’s Kelly McNamara fifth in 1:02.30.

14-year-old Lucie Nordmann, the 100 back winner, continued her great night with a 1:01.40 to win the B final. That would have been fourth in the A final.

Andrew Seliskar smashed his second race of the day in as many boys events, going 52.81 to win the 100 fly. That’s Seliskar’s first time under 53 seconds and moves him into the top 8 in USA Swimming history for 17-18 year-olds. Seliskar now sits 8th on that list.

NOVA of Virginia’s Frederick Schubert and Huntsville’s Zach Harting tied for second, over two seconds behind Seliskar at 55.28.

Jon Burkett of the Jersey Wahoos joined those two in the 55s, going 55.87. Just behind him was a tight group of finishers, starting with Counsilman Center’s Ian Finnerty, an Indiana commit. Finnerty was 56.17, and Burkett’s Jersey teammate Alexander Martin took sixth in 56.27. Also competing in the A final: Murphy McQuet of New Trier (56.55) and Patrick Cusick out of Dynamo (56.61).

Lucie Nordmann has really a very good meet so far. Especially on backstroke. And she shows she can swim fast in long course. A name to remember for sure.

Isabella Rongione seems to stagnate for a year or 2.

And a last word about 13-year-old Kate Douglass who won the 200 breast C-Final and swam her race in LCM in the same way as she did in Austin last January. She sleeps during the first part of the race and then boom, the machine starts and she finishes like a… Read more »

Nordmann is one to watch

The only problem is…where/when? If only fully tapers for the WUG’s, then the only time we’ll get to see is the 200 fly.

But he could very conceivably swim all six of those events at trials in 2016, and make finals in all six.

Given where he’s at in the season, I predict Seliskar goes significantly faster over the summer. Some time predictions
100 fly
200 fly

20 minutes later, Seliskar with a 52.81 in the 100 fly.
8th all-time in the age group. 4th-fastest USA male this year.
Has anyone else ever been top eight in the 200 breast and 100 fly at the same time? Especially with two swims done within 20 minutes of each other?

The first 18 year old to swim those two events prolly was. But outside of that, guessing not 🙂 His versatility remains his most outstanding quality.

Seliskar’s swim takes him from 30th- to 4th-fastest in the 17-18 age group, behind Cordes, Prenot, and Cody Taylor.