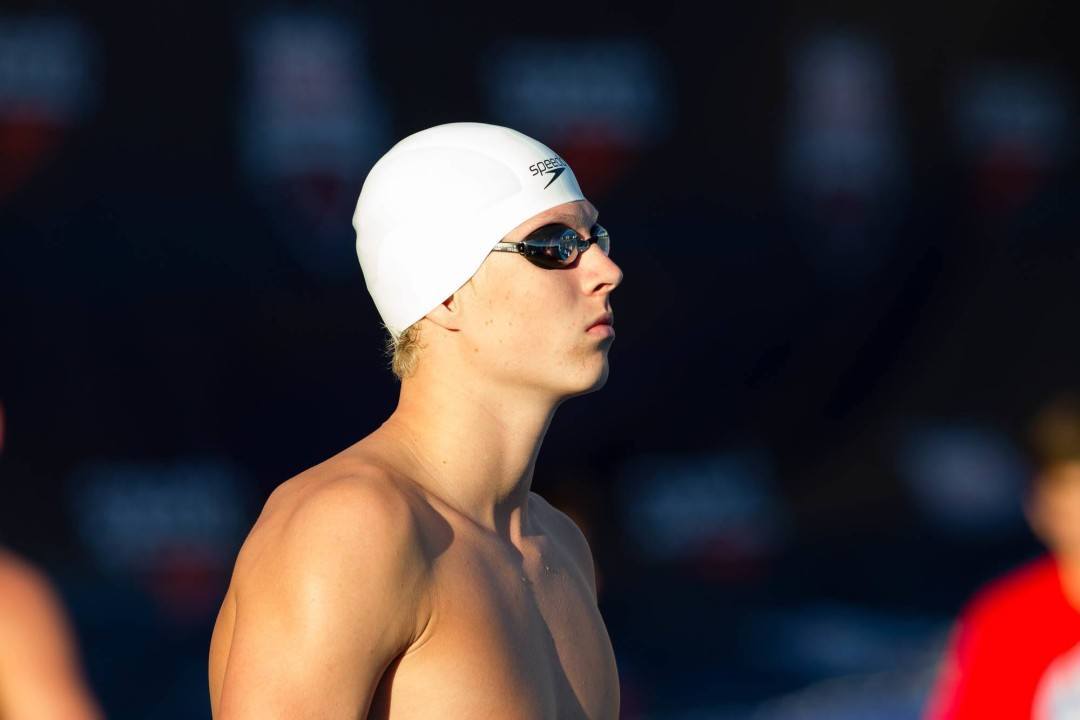 The long course edition of the 2015 NCSA Junior National Championships, hosted in Indianapolis, Indiana, began on Tuesday and run...

The long course edition of the 2015 NCSA Junior National Championships, hosted in Indianapolis, Indiana, began on Tuesday and run through Saturday at the IUPUI Natatorium. This meet is not as heavily attended as its short course counterpart in March, largely because it butts up against USA Swimming’s Junior National meet, but has been gaining steam, especially from Midwestern swimmers who are geographically convenient to the site.

The first day’s preliminary rounds had one standout swim, and that was the men’s 100 free, where Zionsville Swim Club’s Kyle Decoursey swam a 50.36 to qualify first into finals, ahead of Ryan Baker (51.50) and Tabahn Afrik (51.57).

That time puts Decoursey under the Olympic Trials Standard (he already had a cut in the 50 free), and would have made him the top seed at USA Swimming’s Junior Nationals meet this upcoming weekend in San Antonio, where he’s not entered to swim.

Can someone explain why Aug 2nd is the cut off date for qualifying for Seniors/Junior National Team, when their are x amount of events on Aug 3rd at Jr Nats, where some swimmers may make an OT cut time/Senior cut time/ and maybe even the Junior National Team.

Can someone explain to me why there is this meet and also the one starting later this week in San Antonio . What is the difference?

Cuts are a little more lenient for this meet, which makes it a better meet for a team environment. Some teams choose to go to nsca juniors and some choose usa swimming jr nats

Unless you’re trying to make the Jr World Team, I think it is crazy to not be at NCSAs this week. I get having to go to San Antonio to make a team; otherwise, why wouldn’t you race in an indoor pool? Not surprising, there are a lot of Texas teams that skipped USA Juniors in their home state to race indoors and give their kids a better facility to make Trials/ best times.

Thanks for the feed back. Can a swimmer go to both meets?

50.36 has to put him in contention for a spot on the Junior National team.