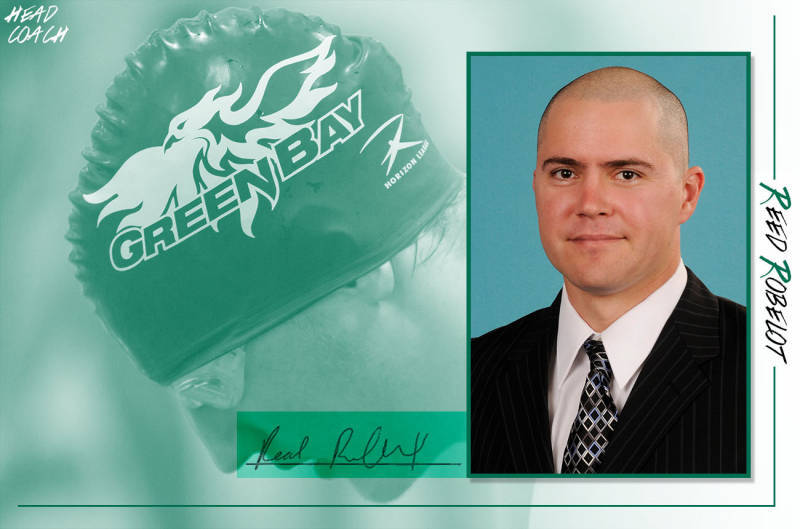 The University of Wisconsin-Green Bay has named Reed Robelot its next head swimming and diving coach, Director of Athletics Mary Ellen Gillespie announced on Friday. Robelot joins the Phoenix following a five-year successful stint as an assistant coach with ACC member Virginia Tech, where he helped the Hokies to three-consecutive top-25 finishes for both the men’s and the women’s teams.

“We are thrilled to welcome Reed to the Phoenix family. He stood out in our search process from day one as someone with a great vision for where Phoenix swimming and diving can go. He has demonstrated success in developing student-athletes who compete in the pool and in the classroom and he is the right person to take our program to the next level,” Gillespie said.

“First I would like to thank Mary Ellen Gillespie and her staff for giving me this incredible opportunity. Her leadership, along with the Phoenix athletic family, make this position a special place in the ranks of Division I swimming and diving. I am humbled and honored to inherit such an accomplished program from Coach Jim Merner and his staff. His legacy of academic and athletic excellence has paved the way for continued success. I look forward to leading our program into a bright, new future,” Robelot said.

Prior to arriving in Blacksburg, Robelot spent the 2007-2010 seasons as head assistant coach of the Western Kentucky University Hilltoppers. There, he helped coach the WKU women’s team to three-consecutive Sun Belt Conference Championships. He also coached the men’s team to a Sun Belt title in the 2009-2010 season. During Robelot’s tenure at WKU, he coached numerous Sun Belt Conference champions, record holders, NCAA qualifiers and an NCAA finalist.

A three-year letter winner at Louisiana State University, Robelot was named to the Southeastern Conference Scholar-Athlete Honor Roll in 1998-2002. He served as a volunteer assistant coach for the University of Houston’s women’s swimming and diving team and as the head coach for the Houston Cougar Aquatic Sports in 2006. As the head coach, Robelot trained a number of Junior National qualifiers and TAGS finalists.

Prior to his time in Houston, Robelot spent four years as the senior assistant coach for the Crawfish Aquatics, a Senior Medal Level Club, while completing his master’s degree in Sport Pedagogy at LSU. During his stint with the Crawfish Aquatics, Robelot helped the team win three LSC Championships and coached several Senior National, Junior National and Top 16 qualifiers.

Robelot will replace Jim Merner, who announced his retirement on May 8, following a successful 25-year mainstay at Green Bay.

Congratulations Reed! H20kies will miss you!

Yeah Reed! Great hire. I am sure he will do a great job.