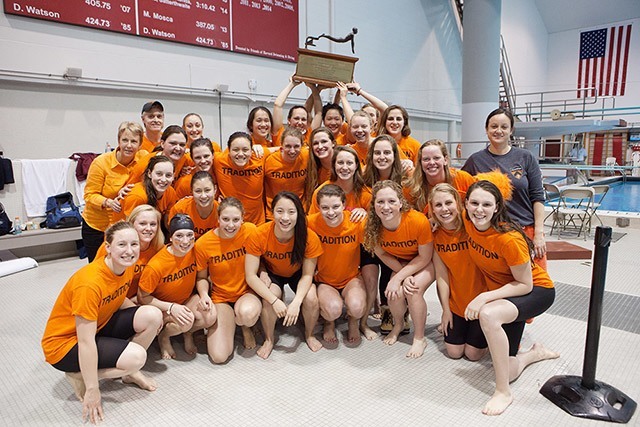 Princeton women's swimming and diving team won their 22nd Ivy League title on Saturday at Blodgett Pool in Cambridge, Mass by the narrowest margin since 2010. Current photo via The Ivy League

Princeton women’s swimming and diving head coach Susan Teeter and her staff just love a challenge. No matter how many times we scored the psych sheet before the 2015 Ivy League championships got started, we couldn’t see the Tigers coming within 100 points of the host team, Harvard. But this is a scrappy group, and they clawed their way into A finals, and improved their prelims seedings, and generally exceeded expectations all weekend.

In the end, it all came down to that 100 free relay. The same one that pulled them even with Harvard to end the annual H-Y-P (Harvard-Yale-Princeton) arch-rival tri-meet; the one that kept them undefeated against a super-performant Columbia in the final dual meet of the season.

And, to be honest, there’s Yale to thank. The Bulldogs won an impressive 6 of 13 individual swimming events and 2 relays, effectively keeping Harvard’s (and everyone else’s, to be fair) swimmers from doing so. The Bulldogs have an incredible amount of strength in their young team; going forward they could use a bit more depth.

The final session of the three-day contest began with a mere 10 points separating the top three teams. Harvard led with 924.5 points; Yale was second with 915.5, while Princeton sat in third with 914.5.

If there was a turning point in the meet it may have been prelims of the 100 free. Princeton put four in the championship final, holding Harvard and Yale to one each. Even though none of the Tigers improved on their positions from prelims, they nonetheless amassed 95 points from this event.

Cornell junior Jenna Immormino looked like she might repeat her front-running prelims performance, getting out to an early lead, but she lost out to Yale’s Kina Zhou and Brown’s Kate Dillione at the very end, 49.47-49.68-49.73. Claire McIlmail of Princeton, who had won the 200 free on Day Two, came in fourth in 49.94. Harvard’s Gabby Sims picked up a fifth for the Crimson, then came the Tiger trio of Elizabeth McDonald, Maddy Veith and Nikki Larson.

Two things worked in Princeton’s favor in the 200 breast: first, sophomore Olivia Chan went from 16th to 9th when she won the B final out of lane 8, adding important points to the Tigers’ team score. Then, Yale’s Paulina Kaminski, who had won the 100 breast on Friday, came from behind to win the 200 (2:14.24) ahead of Harvard’s Stephanie Ferrell (2:15.01) and Geordie Enoch (2:15.41). Ellie Grimes (Penn), Kristine Ng (Columbia), Ali Stephens-Pickeral (Yale), Sydney Tan (Penn), and Melissa Fulenwider (Princeton) rounded out the final.

By the end of the 200 breast, Harvard had moved back in front. They held a narrow 3.5-point lead over Yale and a more robust 41.5-point lead over Princeton. However, the Crimson did not have one swimmer in the final individual event: the 200 fly. What they did have, however, was a quartet of divers in the championship final of the 3-meter diving event. But Princeton had two A and two B butterfliers, as well as three divers in finals, so it was starting to look as if the Tigers might pull off the win.

The 200 fly is always a great race to watch, and this one was particularly exciting because the top five qualifiers were only separated by .21. For most of the race it was a three-way battle among Yale’s Isla Hutchinson-Maddox and Sydney Hirschi and Columbia’s Christina Ray. But in the end it was the back-halfers who won the race. Brown’s Gina Matsumoto and Princeton’s Elsa Welshofer powered past the lead group over the last 50, touching in 1:58.61 and 1:58.62, respectively. Hutchinson-Maddox was third with 1:58.80, while teammate Hirschi took fourth in 1:59.09. Fifth place went to Taylor Sneed (Penn), followed by Morgan Karetnick (Princeton), Christina Ray (Columbia) and Trudi Patrick (Columbia).

And just like that, Princeton shot past Harvard and now trailed leader Yale by 29.

Harvard had four divers competing in the top eight, and while they turned in well-executed dive after well-executed dive, Princeton’s Caitlin Chambers remained unperturbed, diving eighth. Chambers kept hitting her dives with remarkable consistency and finished with 360.55 points to break both the meet and pool records. Yale’s Lilybet MacRae (338.30) soared into second place with a flawless final dive, not quite three points ahead of Harvard’s Jing Leung (335.60), who had been the Crimson’s top performer of the day. Harvard’s Elina Leiviska was fourth, while Lisa Li of Princeton finished fifth. Harvard scored sixth and seventh with Alisha Mah and Schuyler Moore, and Princeton’s Deborah Daly placed eighth.

The diving took Yale out of the race for first, barring a Princeton or Harvard relay disqualification, and now Princeton led Harvard by 11.5 and Yale by 30. Four safe relay starts was really all that was separating Princeton from the team trophy.

That it should come down to this event was poetic for Princeton. This was the event they nailed to secure a 150-150 tie with Harvard at the H-Y-P double dual meet. It was the same event that kept them from losing their final dual meet to Columbia. Princeton didn’t even need to win the relay; all they needed was to finish third or better and the Ivy crown was theirs.

But that’s not how the Tigers wanted to go out.

A tie in the mile is absurd. That must have been something else to see in person. Wow.

It was vintage Eva Fabian. The entire pool -supporters of all eight teams- gave them a standing ovation. Here it is, courtesy of the Ivy League Digital Network: https://t.co/i0X8X7dNBE

Congratulations to all the swimmers. A most impressive finish for the Tiger women!

I think you forgot to count the scores for the divers finishing in 17th – 24th places. I think the correct diving scores are: Harvard 267, Princeton 195, Yale 97