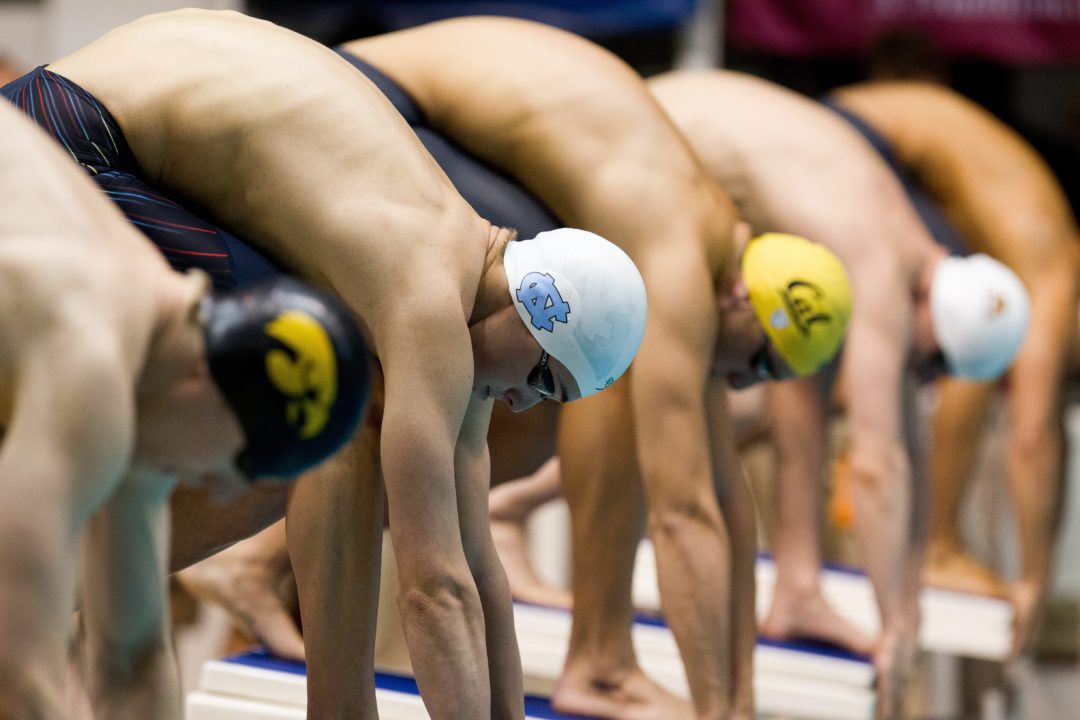 Sure Cal won the team title, but now it's time for the real awards - the Swammies. (©Tim Binning/TheSwimPictures.com)

The Cal Golden Bears men took their second-straight win, giving the men’s and women’s programs (though separate in administration) a total of 5 NCAA Titles in the last 4 years.

Now let’s hand out the men’s edition of the Swammie Awards for the 2012 NCAA Swimming & Diving Season.

Swimmer of the Year – Tom Shields, Jr, Cal – Shields just absolutely killed this meet. He was the second man in history to win a 100 fly-100 back double, and he did it on a day where he swam both of relays (the only swimmer to do that). There’s no way to describe what Shields did over the weekend other than “manned up”. He played all of his races to near-perfection, using his awesome underwaters to blow past his competition at the ends of races without burning a whole lot of energy. Given the circumstances, I don’t think even the runner-up in the 200 fly is really a blemish.
Honorable Mentions: Jimmy Feigen – Sr. – Texas; Martin Grodzki – Jr. – Georgia; Carlos Almeida – Sr. – Louisville

Coach of the Year – Arthur Albiero, Louisville – Albiero didn’t get the NCAA’s version of this award, but to me it was a no-brainer that the coach of the Louisville Cardinals was the coach of the year. Before Albiero game to Louisville from Alabama in the 2003-2004 season, the Cardinal had never scored at an NCAA Championship meet before. In 2005, his second year at the helm, they broke through for 27th-place. They’ve gone on to score every year since, and were 17th last season. This year, they jumped all the way to 9th, which is easily their highest finish ever.
Honorable Mentions: Dave Durden – Cal;  Eddie Reese – Texas; Rich DeSelm – North Carolina; John Hargis – Penn State

Freshman of the Year – Will Hamilton, Cal – Not enough can be said about Hamilton and the meet (and Championship season in general) that he had. He played the year like someone with twice his experience. He was brutal in-season, had big drops at Pac-12’s (just enough to make it into NCAA’s), and then even more big drops at NCAA’s. The meet concluded by beating the Swimmer of the Year (Sheilds) in an event where he’s the NCAA Record holder (the 200 fly), which is no small feat for a freshman.
Honorable Mentions: Kevin Cordes – Arizona; Seth Stubblefield – Cal; Cristian Quintero – USC; David Nolan – Stanford; Kristian Ipsen – Stanford

Breakout Swimmer of the Year – Jason Schnur, Jr, Ohio State – Schnur was a breakout star for the Buckeyes in a sprint field where there was a bit of a vacuum this season. He really stepped up and took the reigns of the team after Tim Phillips moved to Charlotte for the year to chase his Olympic dream. Schnur improved his 50 free this year by six-tenths (he was only a 19.7, but won Big Ten’s in a 19.1 this year) and his 100 by 8-tenths. This was a big breakout for the sprinter, and this young Buckeye team is going to be scary next season with Phillips back. The pending Big Ten collision in 2013 between Michigan and Ohio State is exciting.
Honorable Mentions: Connor Jaeger – Michigan; Frank Dyer – Notre Dame; Michael Weiss – Wisconsin; Joao de Lucca – Louisville; Steven Cebertowicz – North Carolina

Relay Swimmer of the Year – Aaron Wayne, Sr, Stanford – Some swimmers have a mentality that they can just step up and swim monster relay legs that go far-and-away faster than what their individual swims-minus the reaction time imply that they should. Wayne is one of those guys. His relay splits on rolling starts included an 18.52 and a 41.71. He’s a swimmer that I really hope continues to train as a post-grad, because the Americans could really use a sprinter like him that just goes nuts on relays.
Honorable Mentions: Jimmy Feigein – Texas; Mitchell Friedemann – Arizona; Paul Gordon – Iowa

How dominant were the top 4 teams in this meet? Even including diving (which often has different specialists than swimming), they won all but three of the 21 National Championships handed out. The big dogs came to play at this meet.

#4 Arizona – Nobody knew what to expect from Arizona this year with the new coaching staff on deck, but things hardly skip a beat. Mission accomplished for Eric Hansen year 1 – he’s won the team over. Now, with that full confidence behind him, watch the cats really take off next year.

#3 Stanford – The Cardinal have an outstanding young team, and though they’ll lose the rock that was their distance group next season, this is a team with a lot of potential.

#2 Texas – Though they didn’t win, there’s no shame for Texas, which is clear by their faces in the shot below They’ve placed in the top 2 in each of the last 5 seasons, which is something no other team has come close to.

#1 Cal – What more is there to say about the champs? They had an awesome meet from top-to-bottom, and hit everything they needed to hit.