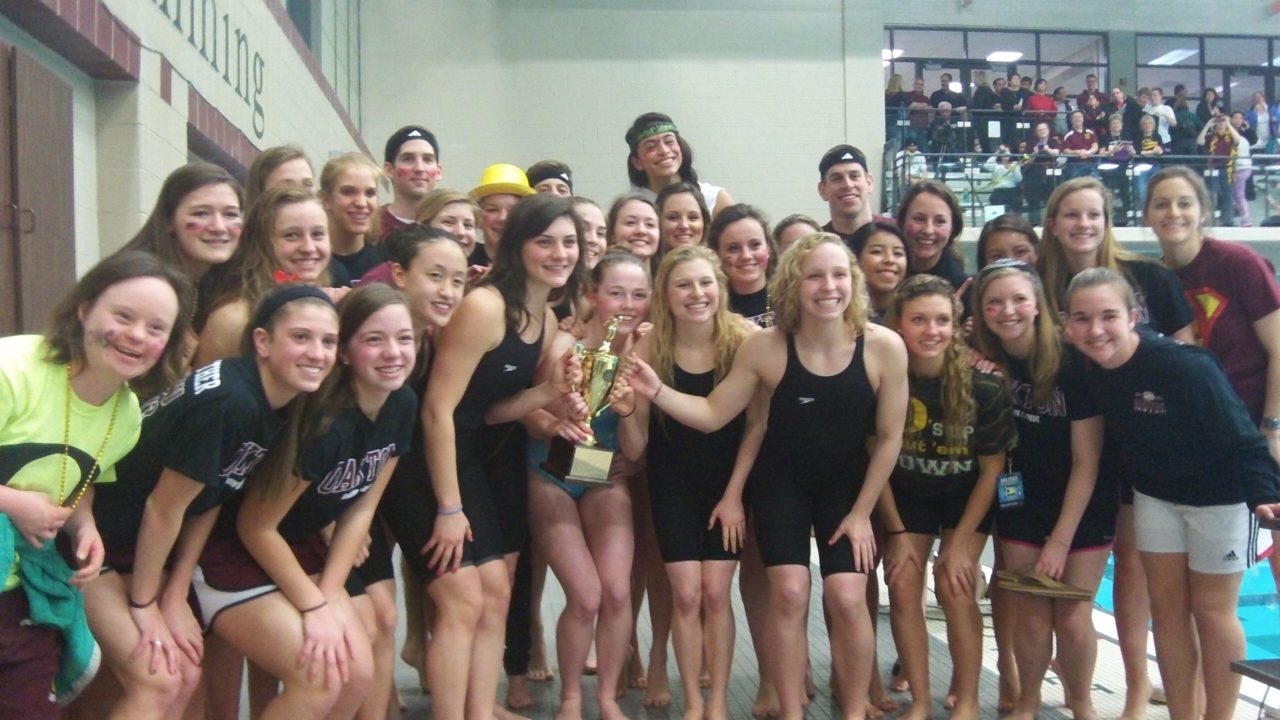 Matt Rees is a huge swim fan, a swim parent, and a brilliant journalist who has worked for The Economist and the Wall Street Journal, among other publications; he now owns a financial communications consulting firm, Geonomica. He was on deck for the 2013 Virginia AAA state championship meet and brings the following report.

One of the factoids coaches like to share with their swimmers is that water is 773 times denser than air. “The higher you are in the water,” they’ll say, “the faster you will go.” That lesson seems to have taken hold in Virginia, where 11 new records were set in the state’s AAA championship meet, held at George Mason University on Saturday night.

The swims by Byrnes served as a potent reminder of Oakton’s depth. The fabulous freshman recorded a 4:49.75 in the 500 free, http://www.youtube.com/watch?v=ctsqsj2Ktyc&feature=youtu.be, breaking a state record set by Rachael Burnett in 2009. Like Hu, Byrnes is not tapered (both swim for Nation’s Capital Swim Club), and has a PR of 4:45 in the 500. She also placed second in the 200 free, going 1:50.24 and being out-touched by Colonial Heights sophomore Abigail Richey, who notched a 1:50.07. Byrnes also swam on Oakton’s 200 free relay, splitting a 23.67, and the record-setting 400 free relay, splitting a 52.99.

Thomas Jefferson’s Andrew Seliskar, one of the most accomplished sophomore swimmers in the country, turned in a blazing fast 200 IM, winning in a state-record time of 1:46.09 – breaking the record he set last year by nearly four seconds and close to the 15-16 NAG record set by Gunnar Bentz last year. Seliskar scorched his competitors in the 100 fly, going 47.92, http://www.youtube.com/watch?v=4Mp9lpqfKGQ. He’s not far off the 15-16 NAG record of 47.10 set by Michael Cavic way back in 2001. Expect him to take down the national public high school record next year – it’s 47.08, which is also Virginia’s state record, set by current University of Michigan swimmer Sean Fletcher in 2009. Seliskar also helped Thomas Jefferson win the 200 medley relay, going 1:33.80 and missing the state record by just .02. (See a SwimSwam exclusive interview with Seliskar here: http://www.youtube.com/watch?v=yrbFGiXJVGk)

Other record-breaking swims came from Chantilly senior Christopher Grimmett-Norris in the 200 free, 1:39.16; Westfield senior Brandon Fiala in the 500 free, 20.78; Langley senior Abi Speers in the 50 free, 23.18; Oakton senior Philip Hu in the 100 back, 49.44 (breaking a record set last year by Seliskar’s older brother, Stephen); and Cox junior Austin Temple in the 100 breast, 55.78. (The record-setting performances by the brother-sister Hu tandem raises a question – have a brother and sister ever set state records in the same meet?)

The closest race of the night came in the girls 100 free, with victory going to yet another Oakton swimmer, Laura Branton, who went 50.79. She won by about the width of a dime over Speers, whose time was 50.82.

As good as this meet was, it may be even more spectacular next year, with national high school and age-group records being chased down by Hu and Seliskar (and perhaps others). They’ll take different paths to continue their progress, but the common denominator will stay the same: a supernatural ability to push through more air than water. Stay tuned.

Hu, another top chinese American swimmer. I noticed that all the top asian swimmers in the US including Cindy Tran of Berekley are Chinese.

North Virginia has a lot of wealth some of the wealthest counties are in that area. In fact Santa Clara I don’t think is any longer in the top 10. Also, Fort Bend and Collins in Texas are in the top 30. Ventura and Orange are in the 70’s as far as wealthy counties, This shows the comparisons and swimmers don’t have to come from wealthy counties but it helps.

Great reporting by Matt Rees. Thanks for your coverage of all the exciting meets in the Virginia ans Maryland area.

Congratulations to all the swimmers.