With No Pebley or Apple, DC Will Count on Andison & DeLoof in ISL Playoffs 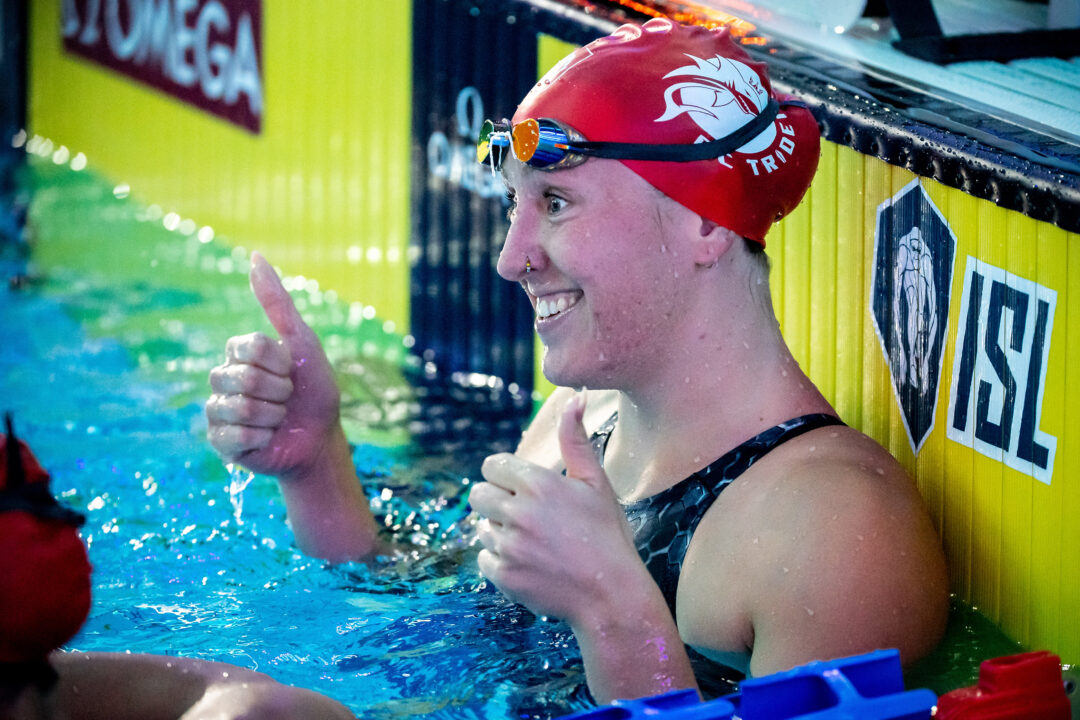 Bailey Andison has been the DC Trident's top scorer this season. With the team missing key swimmers for the Playoffs, she'll come even more into focus. Archive photo via Giorgio Scala / Deepbluemedia / Insidefoto

The DC Trident will be without two of their big male stars next week with the ISL Playoffs begin.

Americans Jacob Pebley and Zach Apple, along with Australian Tristan Hollard, are absent from the team’s roster heading toward the Playoff round of competition.

The absence of Pebley in particular will hurt the Trident, because he was swimming very well so far in the ISL season, in spite of sitting out the U.S. Olympic Trials in June. His 101.5 MVP points ranked him 56th league-wide in the regular season, 4th on the DC roster, and 2nd among DC men.

Apple, the double relay Olympic gold medalist from Tokyo, is the biggest name among the group of absences, though his 2021 regular season performance didn’t live up to his swims in previous seasons. Even with the extra meet, Apple finished tied for just 164th place in individual scoring in the ISL regular season. That includes being relegated to relay-only duty late in the year. His 9.2 points/match in 5 regular season matches was well below the 29.75/match he scored in the 2020 regular season for the Trident. A full-strength Apple, of course, would have been a significant boost to the Trident in the playoffs.

Hollard swam in just 3 regular season matches for Triden, scoring positive points in only one of them.

The absence of Pebley and Apple puts increased pressure on the Trident women in the Playoffs. Those women have so far been very good for the team this season. Bailey Andison finished the regular season ranked 15th in MVP scoring, which made her one of the top-scoring athletes who doesn’t get much benefit of relay points (because she specializes in non-relay events). She averaged 32.2 points/match in the regular season. Also part of that group is Ali DeLoof, who is having the best year of her ISL career. She ranks 35th this season in MVP scoring, and is averaging 24.7 points/match, and has produced some of the fastest short course meters backstroke times by an American in history.

The Trident will bring up some reinforcements for the playoff round. Mohammed Samy, Drew Loy, and Rachel Nicol, all of whom didn’t race in the regular season, are available on the Playoff roster, as is Madison Kennedy, who swam some regular season meets but didn’t swim in Match 11.

That Match 11 was the big breakthrough for the Trident. With their 2021 season on the line, they beat Iron, New York Breakers, and Tokyo Frog Kings to advance to the playoffs for the first time in franchise history. That was also the team’s first-ever ISL win.

While the team is improved from last season, it will still be a near-impossible task, especially with those key absences, for Trident to advance to the upcoming ISL Final in December as one of the top 4 teams from the Playoffs.

DC General Manager Kaitlin Sandeno says that there are a few further scheduling conflicts that will keep some athletes out of some Playoff matches. Every other team so far that has sent SwimSwam a roster has said similar things, but for the Trident, the margins are much slimmer.

The Trident will open their Playoffs with the first of three matches on November 11 and 12 in Eindhoven, Netherlands. There, they will stack up against Iron, as well as the top two teams in the league Energy Standard and Cali Condors. While DC beat Iron in Match #11, the dynamics shift dramatically in the playoff format – not only because of roster changes, but because Iron’s relative-strength in a matchup with top teams is probably better than DC’s.

There are still some big storylines for DC, and even in a ‘draft’ era where team momentum and reputation winds up having an oversized impact on athlete recruitment and retention, they still have things to prove. That includes the possibility of the league’s #2 rookie draft pick Ryan Hoffer realizing his full ISL potential. He improved throughout the regular season, but was only the 57th-ranked draftee in ISL MVP scoring this year.

jay seems to be absent as well…

Strange how athletes can just opt out of playoffs.

Yeah if they commit to a team, they should have to do play offs.

Any reasons given for their absence? Apple is headed to SC Worlds, maybe prepping for that but Pebley is not.