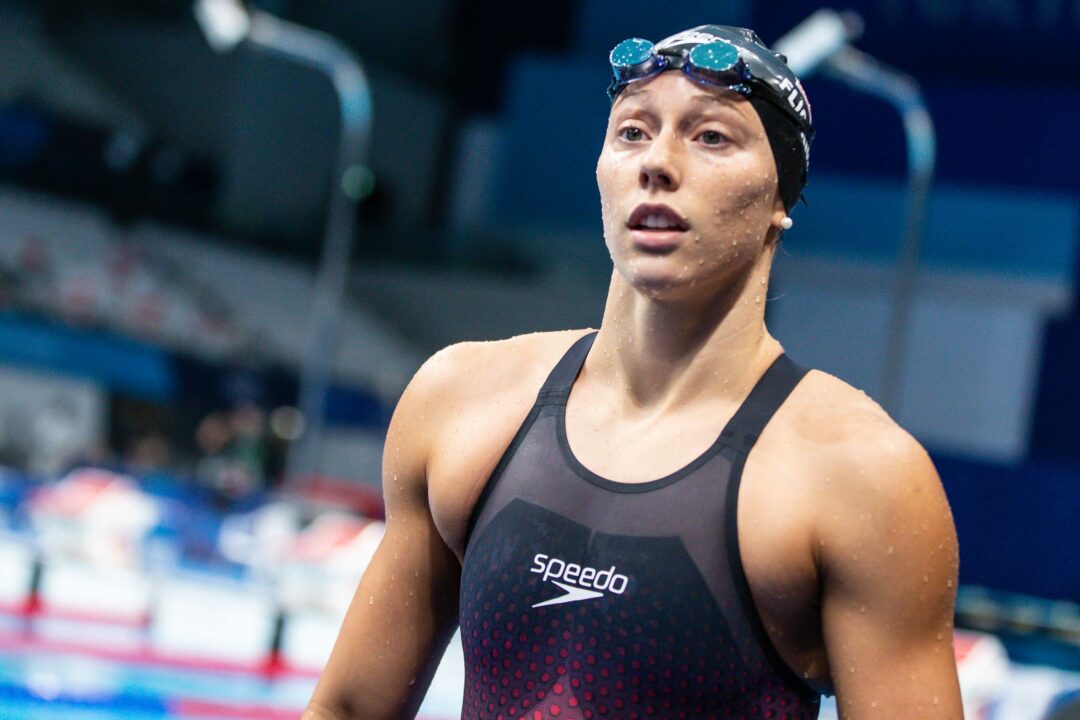 Hali Flickinger, who was 11th in ISL MVP scoring in 2020, didn't race in the regular season, but is on the Cali Condors' playoff roster. Archive photo via Jack Spitser/Spitser Photography

The richest team in the International Swimming League will get a little richer in talent ahead of the upcoming Playoff round of competition. The defending champion Cali Condors will be at full strength in Eindhoven in November, with a few crucial pieces returning to their lineup.

Eddie Wang and Hali Flickinger, both of whom missed the regular season, are on the Condors’ roster for the Playoffs and expected to compete.

The return of Flickinger and Wang will boost an already-loaded roster. In the 2020 regular season, Flickinger ranked 13th in MVP scoring, averaging over 41 points-per-match.

She swims a lineup of events that aren’t very deep across the ISL (or the world), chewing up points in high-stress races like the 400 IM and 200 fly. While she will bolster the team there – the Condors are so good that they still scored big points in her primary races even without her. For example, Kelsi Dahlia and Katerine Savard finished 1-2 in the 200 fly in Match 7, where London beat Cali, and an event where Flickinger is the Tokyo 2020 Olympic bronze medalist.

Wang, meanwhile, was one of the breakouts of the ISL’s second season, scoring 49 points across 4 regular season matches and breaking World Junior Records in the process. While he’s great in just that one event, the 200 fly, and hasn’t done a lot across a wide event load that the ISL format emphasizes, that one race is one that’s a weakness for Cali: Khader Baqlah was a forced-fill-in for Match 7, and had his points Jackpotted.

General Manager Jason Lezak did caution that he expects to be missing some swimmers for portions of the Playoffs, but he kept his cards close to his chest, declining to say who or what meets aside from breaststroker Molly Hannis missing the last Playoff match for her wedding. The presence of Emily Escobedo, who missed the end of the regular season for her own wedding, will help soften that.

Dressel, in spite of missing a match-and-a-half, still ended the regular season at the top of the MVP standings, and is second after the “Death Match” – Match 11. The only swimmer who passed him, Daiya Seto, swims for Tokyo Frog Kings, and his season is over. Dressel is averaging 46.6 points per match day this season, which comes out to almost 100 extrapolated to a full-match basis.

The team will also receive full services of some top names who missed parts of the regular season, including 2021 ISL MVP Caeleb Dressel, the Condors look as good-as-ever, in spite of finishing behind the London Roar in their third regular season match, ending an 8-match winning streak.

Other big contributors who missed part of the regular season, but who are on the playoff roster, include Natalie Hinds (16.75 points/match), Olivia Smoliga (22.6 points/match), and Emily Escobedo (12 points/match).

The Condors currently have the top-two ranked swimmers in MVP scoring among athletes progressing to the Playoff: second-year pro Beata Nelson is just 1 point behind Dressel.

The only thing that could conceivably stand in the way of this Cali roster and a second straight title is Energy Standard. We didn’t see the two teams matchup in the regular season, but we will in the Playoff round. Energy Standard has some firepower that they could add to their roster as well, but they haven’t yet released their list of 32 for Eindhoven.

Cali Condors will kick off their Playoffs on November 11 and 12 in a match against Energy Standard, DC Trident, and Iron. That will be the first of their three Playoff matches, with the top 4 out of 8 teams ultimately advancing to the Final scheduled for January.

The only swimmer on the Condors’ pre-season roster who didn’t make a regular season appearance and who isn’t on their Playoff roster is Aleksandr Krasnykh. The 26-year old won an Olympic silver medal for Russia as part of their 800 free relay and took bronze in the 200 free individually at the 2017 World Championships.

Condors so needed some reinforcements. 🙄

I hope Kristof Milak shows up for Iron, so that we can enjoy Dressel vs Milak for 3 matches in a row.

Milak’s strong second place showing (a personal best BY FAR) in Tokyo in the 100m fly was a fluke. He’s a 200m fly swimmer.

Flickinger is the new hosszu

She’s been that, people are just now paying attention

Don’t get me wrong, Flickinger is great – drop me from a hot air ballon hali – but Peak Hosszu in the ISL would basically be Dressel. (Not as useful in skins, but otherwise just jackpots all over the place.)

Not necessarily jackpots, more like top-3 finishes in at least 6 events per session

Wang is also a pretty good 400 freestyler, so having him back on the team should help fill that hole.

They should get another good 400 freestyler in the form of Taper Townley.

I believe that earlier this ISL In-Season Townley went slower than Ariarne Titmus’ Olympic LCM time. Taper Townley should be under 3:40 though.