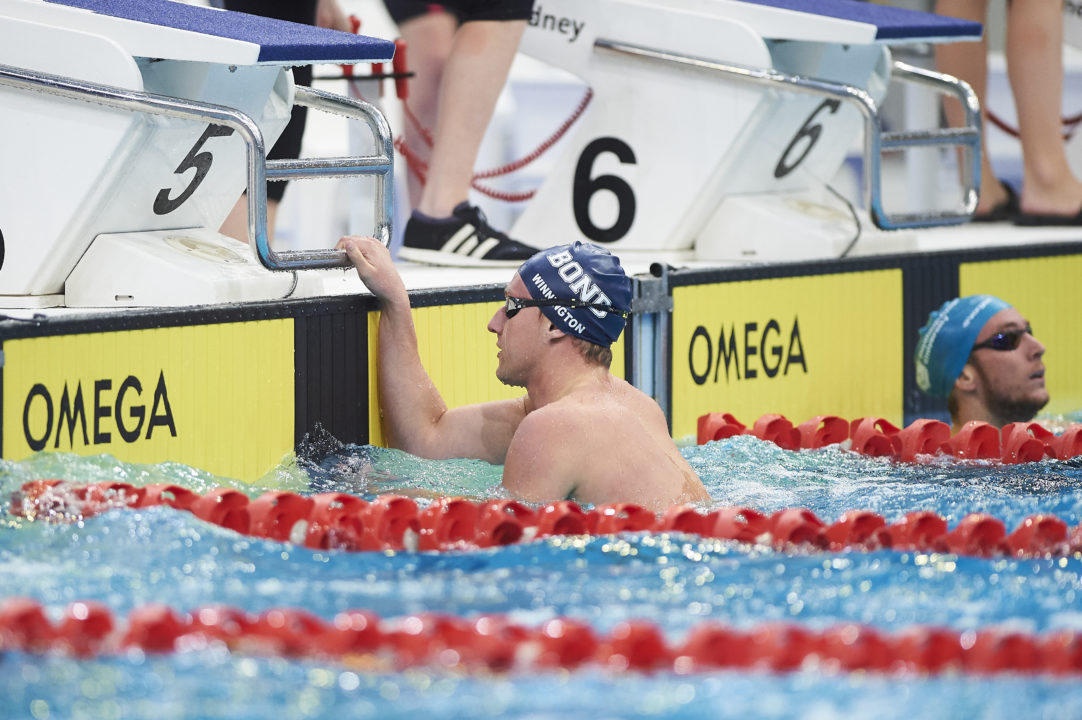 Get an in-depth perspective on all the incredible swims that went down today in Brisbane at the 2020 Queensland Championships. Archive photo via Jaimi Joy, www.jaimijoy.com

In addition to the swims you’ve read about in separate posts, such as Flynn Southam‘s 100m free age record or Emma McKeon‘s impressive 100m fly/100m free double, a handful of performances stood out from day 2 of these 2020 Queensland Championships.

Here are separate posts stemming from today’s action in Brisbane:

Owning a PB of 51.47 from last year’s World Championships Trials, Temple nearly replicated the feat, hitting a time of 51.51 to render himself the 6th place finisher in Gwangju.

HIs 51.64 from this evening now ranks as the 4th fastest swimmer in the world this season.

Behind Temple tonight was Mitch Larkin, the man who crushed a winning 100m back result of 52.75 last night. Here, Larkin posted a time of 52.78 to snag 100m fly silver, establishing a new PB in the process. The only result for Larkin in Swimming Australia’s database is represented by the 54.97 100m fly time he logged just last month.

She was able to comfortably hold off TSS Aquatic swimmer Kiah Melverton and Noosa’s Kareena Lee, who fought hard for silver in respective final results of 4:07.45 and 4:07.47. Although the former has been as fast as 4:05.30 in her career, Lee’s effort here obliterates her former PB of 4:09.56 from this same meet in 2019.

As a side note, we reported how Pallister and her mom coach Janelle have both moved to Griffith University as their new training base. You can read more about that changeup here.

St. Peters Western standout Elijah Winnington did his thing tonight in the men’s 400m free, powering his way to the wall in a mighty 3:43.90. Winnington had never before been under 3:44 in this event, owning a previous career-quickest time of 3:44.68 from last year.

Winnington gave us a good glimpse into where his form is at with a dirty 1:45.79 200m free from last night. His 4free effort here now bumps him up to become Australia’s 6th fastest performer all-time.

Winnington’s time tonight easily takes over as the top performance in the world so far this season and would have placed 5th at last year’s FINA World Championships.

Winnington had given us a glimpse as to where his training was at when he became his nation’s 3rd fastest SCM performer ever in this event. This past October, Winnington crushed a time of 3:37.45 to get under 3:38 for the first time.

Australia has quite the overload of talent in this event.

Emma McKeon was the star of the night with times that would have put her in the medals frame at any Olympics. Elijah Winnington was also impressive and he has emerged as one of the best middle distance freestylers in the world. No wins for Kaylee McKeown but 1.07.85 in the 100BS and 54.33 in the 100FS look really smart. I think she can go 2.07 in the 200IM tomorrow and be an Olympic gold medal contender in that event, too.

McKeon winning the 100free at AUS Trials may not be the outside bet we would’ve thought a couple of years back. She, most certainly, has to be favoured to snag one of the individual spots for the event. It certainly would not surprise to see her PB take another sizeable trip “south” which would most likely see her part of the medal equation. It will, however, be interesting to see how they manage her swims through the meet given she is almost certainly a key player on all 3 women’s relays plus MMR on top of potentially 4 individual events (100fly, 200free, 100free & maybe 50free). Whilst there appears sufficient quality RELIABLE depth for 4×100 & prob 4×200 to rest… Read more »

Very good point on how she manages the swim meets in Tokyo. I think Australia definitely has depth in the 4×100 & the 4X 200 is also looking good, love to see what Kaylee McKeown can do there?
Butterfly would depend on the form of Thorssell or maybe even Groves.

Male flyer (Temple?) will probably do the heats in the MMR.

Winnington probably firms for one of the 2 individual spots for the 400free as he looks optimised for 200/400. This may seem a touch harsh on McLaughlin but he may be better setting towards 800/1500.

Whilst “not there” at this point re qualifying via 4×200, Pallister is probably ahead of Melverton for 2nd berth at 400/800.

Men’s 100free did look a tad “meh” looking at times but Cartwright at 48.58 is quite a pleasing indicator that he may be back on the scene and a reasonable chance of bettering the QT of 48.33 for a 2nd entrant behind Chalmers. At minimum, he should strengthen the 4×100.

What did ever happen to McEvoy? Yes poor swim in Rio, but never went close to those times again.

Agreed, Winnington showing his racer mentality of getting it done with genuine threats pushing him to PB’s in both virtual short course meet and this one tonight. McLoughlin will not have an easier road down the 800/1500 path with the crop of young guns coming through, though I still see him as a favourite for those 2 events. Some really great racing and sensational times coming out of this meet considering the interruptions to training programs this year.

I actually disagree with the 400 free. Elijah does these huge times every year at meets that don’t actually mean anything. His 3:45 in 2018 3:44 in 2019. But when it actually gets to the meet that counts at trials, not sure what happens but he is never at that level. The one 400 he did make into a major meet was pan pac trials but Horton and McLoughlin were both already preselected from com games so didn’t race.

At pan PACs he poorly performed again in the heats going 3:49 whilst Horton and McLoughlin cruised their way into the final at 3:45.

We are too impatient with young men . I can’t even recognise nephews if I have not seen them for a few years 19-24. So much change ! Elijah will come thru.

Will certainly grant your point re Winnington in 2019. I do however give a couple of World level meets and or their respective Trials before making a call as to whether these are just early career anomalies or indicative of their “big match temperament”.

Horton, untapered, “plods”; that has been the pattern of his career. However, barring untoward circumstances or someone swimming the lights out at Trials, he is a fairly secure bet to snag one of the 400 spots

I DO think McLaughlin is a 400/800 man, optimally but I don’t think he has much top-side at 400 on what has already been shown. Horton is likely to be quicker than 3.43 and we don’t yet have the… Read more »