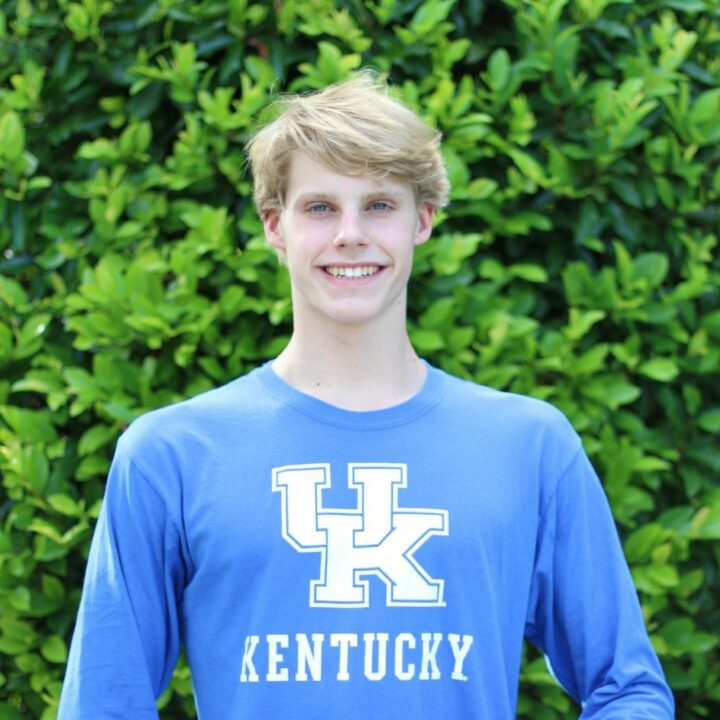 Kentucky hosted Indiana for a dual meet late this morning at the Lancaster Aquatic Center, falling to the Hoosiers in both men's and women's scoring. Stock photo via Levi Sandidge

Kentucky hosted Indiana for a dual meet late this morning at the Lancaster Aquatic Center, falling to the Hoosiers in both men’s and women’s scoring. The Indiana men defeated Kentucky soundly, 201-96, while the women’s meet was much closer, seeing IU top UK 161-139.

Although his team lost, Kentucky freshman Levi Sandidge had a phenomenal day, winning all three of the longest men’s events. He kicked his day off with a resounding victory in the men’s 1000 free, swimming a 9:02.22. He swam an incredibly consistent race, touching less than four seconds off his lifetime best of 8:58.77.

Jassen Yep continues to swim well for Indiana, sweeping the men’s breast events after racing well at IU’s intrasquad this past weekend. Yep clocked a 55.01 in the men’s 100 breast, leading teammate Max Reich (55.52) into the wall. Yep and Reich were the top two finishers in the men’s 200 breast as well, with Yep clocking a 1:59.21 for first and Reich a 1:59.43 for second.

Notably, Indiana’s Josh Matheny, a star breaststroker, was off in his events today, swimming a 57.12 in the 100 breast and 2:12.51 in the 200 breast. Matheny reportedly is coming off a recent illness which caused him to lose a significant amount of weight. He only raced on one relay at the IU intrasquad meet over the weekend.

Indiana’s Rafael Miroslaw took the men’s 100 free and 200 free, leading one-two charges for the Hoosiers in both events. In the 200 free, Miroslaw built a small lead on Burns early in the race, and was able to close faster than his teammate as well, getting into the finish in 1:37.24. Burns swam a 1:37.98 for second.

After winning a combined five events at Indiana’s intrasquad this past weekend, sisters Anna and Noelle Peplowski won five events today as well. Anna Peplowski, a sophomore, was a triple event winner on the day, taking sweeping the backstroke events and winning the 50 freestyle as well. In the 100 back, Peplowski beat out Kentucky’s Caitlin Brooks, swimming a 53.48 to touch 0.39 seconds ahead of Brooks. Peplowski was faster than Brooks on both 50s, swimming 26.00 on the first 50 to Bro0ks’ 26.19, and 27.48 on the back half to Brooks’ 27.68.

Noelle Peplowski, a fifth year at Indiana, swept the women’s breaststroke events. She won the 100 breast handily, swimming a 1:01.03 to get her hands on the wall 1.22 seconds ahead of runner-up Bridget Engel (Kentucky). Noelle then swam a 2:10.87 to win the 200 breast, again beating the field convincingly. She then raced the 400 IM, where she came in fourth, swimming a 4:22.64.

The Peplowski sisters each helped an Indiana relay to victory on the day as well. Noelle swam the breaststroke leg of Indiana’s women’s 200 medley relay, splitting 28.00. Kacey McKenna led the team off with a 25.68, Lily Hann split 24.69 on fly, and Kristina Paegle anchored in 22.04, combining for a 1:40.41.

Kristina Paegle, an IU freshman, was victorious in the women’s 100 free, swimming a 49.79 to touch the wall first by over a second. Fellow Hoosier Ashley Turak was second, swimming a 50.84.

Indiana’s Mariah Denigan swept the women’s distance events, first taking the 1000 free in 9:53.26. The IU distance group looks to be in good shape, as Ching Hwee Gan took second in 9:58.91. Impressively, both women clocked negative splits in their races.

Hoosiers off to a good start! Keep it rolling

Turak and Ristic were flip flopped in the relay. I believe Turak split the 50.09 after her 50.8 in the individual…

The results are Virginia Tech Vs Ohio