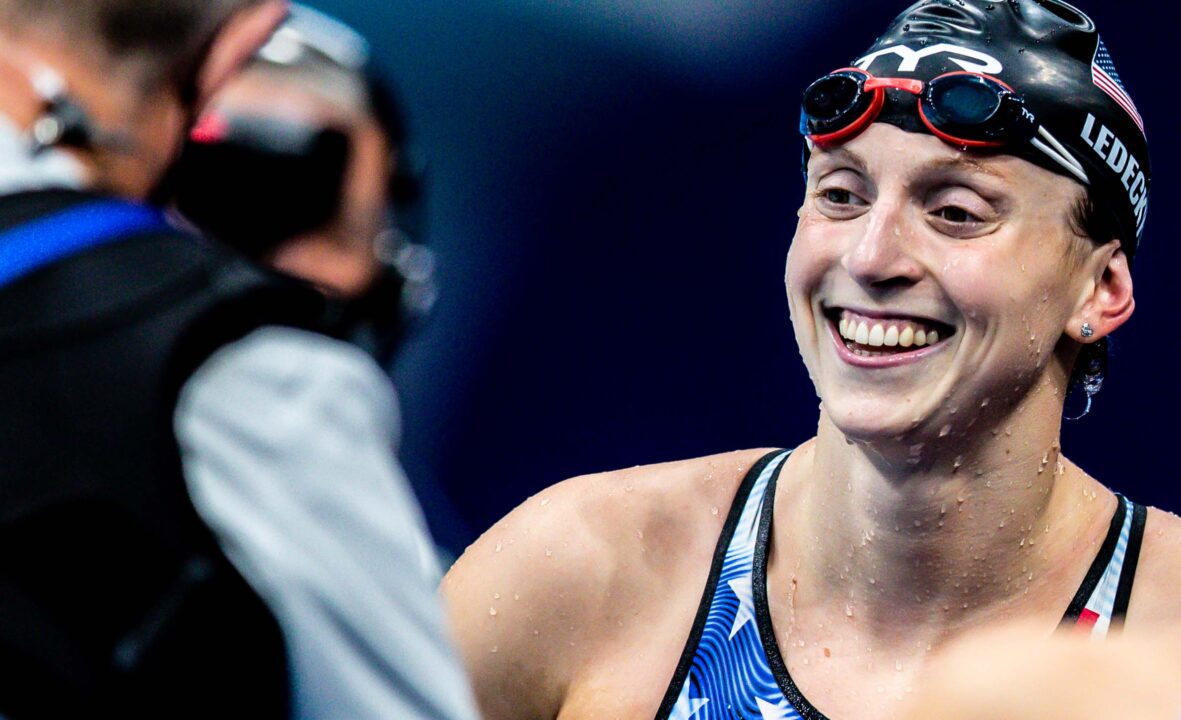 While we haven't been able to track down any videos of Katie Ledecky's electric 200 or 800 free finals, a club team in Florida has posted a handful of other big races from Plantation. Archive photo via Jack Spitser/Spitser Photography

Katie Ledecky is on a tear this weekend in Orlando, Florida, swimming faster than her times from the Olympic Games in both the 200 free and the 800 free.

But the freestyles aren’t the only races she’s taken on: she also swam to a 4:39.68 in the 400 IM. That is the fastest time she has swum in that race since January 2019, and only a second-and-a-half away from her lifetime best in April 2017.

While we haven’t been able to track down video of her finals 200 free or 800 free yet, video of her 4:39 in the 400 IM has been posted online by the Radiant Aquatics Swim Team.

In addition, the club has posted a number of other race videos – including Caeleb Dressel‘s 51.95 in the 100 fly from Friday evening.

While Dressel raced intermittently in short course during the International Swimming League season, and has swum a few unofficial races during the University of Florida season, that is his first 100 fly in long course since winning gold and breaking the World Record in Tokyo at the Olympics.

I would like to see Ledecky’s current stroke under water. If you look at her 2018 and earlier vs the 2021 Tokyo technique, I feel that there is less glide on her left hand than there used to be. Her right hand glide has not changed, but the left pulls prior to the recovery of the right. I wonder if her she has recently readjusted her stroke?

Not sure she would love it…but her fly did look good. Kick not as powerful as upper body tho or so it seemed.

You can find video of all the races on https://www.iswim.tv/live/southern-zone-sectionals-2022

The meet is in ORLANDO, not Plantation

Just a correction, they are swimming in Orlando, not Plantation.

8
0
Reply
Grimes/Mcintosh combo is the future