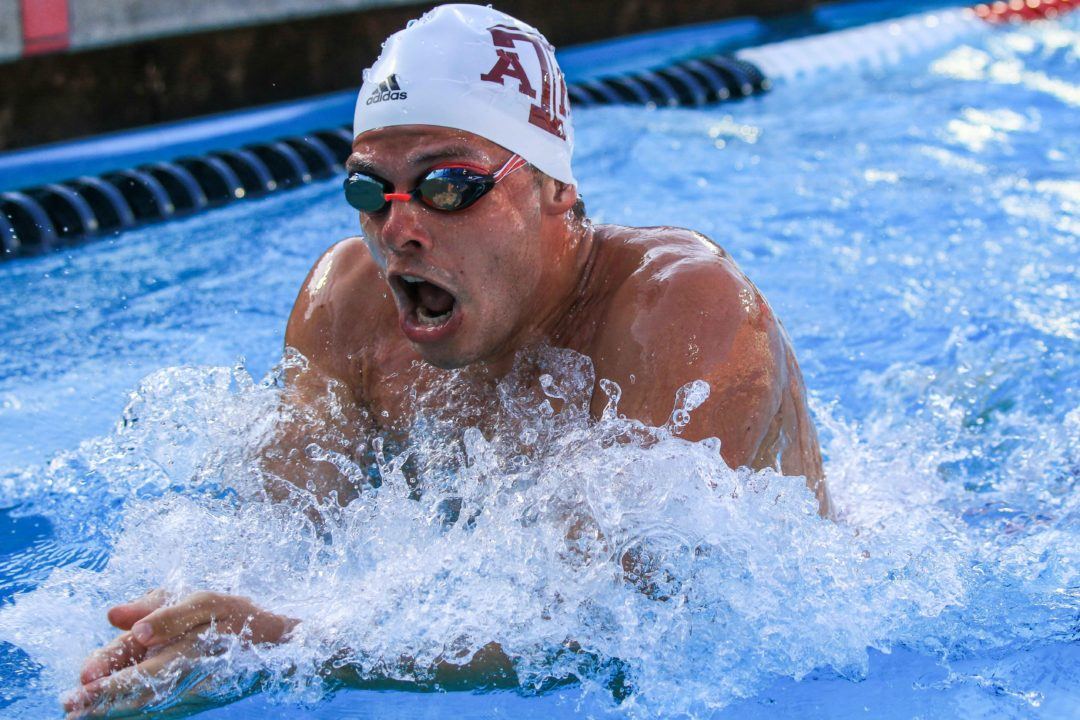 Ben Walker swept the breaststrokes, setting a new Pool Record in the 100 breast. He made it a winning triple as he went on to win the 400 IM as well. Archive photo via Jack Spitser/Spitser Photography

Ben Walker and Adam Koster each set a Pool Record as Texas A&M topped SEC rival LSU on Saturday. Walker set his record in the 200 breast. He was dominant in the race, winning by 4 seconds in 1:56.72. Walker also won the 100 breast for an individual sweep, clocking a 54.32. He kept his winning streak going in the 400 IM to make it a triple, winning by 10 seconds in 3:51.25.

On the women’s side, Raena Eldridge was one of the double event winners for A&M. Eldridge swept the sprints, first taking the 50 in 23.17. She returned for the 100 free, battling LSU’s Katarina Milutinovich. They were within a tenth of each other at the flip, but Eldridge split slightly faster on each 50 to win it 50.99 to 51.31.

BATON ROUGE, La. – The No. 19 women’s swimming & diving team got back on track in a big way by defeating LSU on the road, 191.5 to 105.5 Saturday afternoon. The Aggies earned first in all but one race and secured multiple sweeps.

The Aggies return to the Rec Center Natatorium for their final dual meet of the season on Saturday, January 25th to take on Arkansas for Senior Day. Events start at 11 a.m. Follow on Twitter for updates, @aggieswimdive.

Post Meet Quotes
Head Coach Steve Bultman
On looking towards the future…
“Good solid racing, stepping up and swimming fast right now, I’m very pleased. This is our second-to-last dual meet of the year. We are getting ready for one more meet next week and then have SEC’s shortly there after.”

Head Diving Coach Jay Lerew
On Charlye Campbell’s Performance…
“We struggled a little bit on 1-Meter, but 3-Meter we looked like we should. I thought it went really well. There’s a diver here who is nationally ranked and Charlye [Campbell] picked her off on 3-Meter, I was very happy for her.”

Senior Swimmer Anna Belousova
On coming back and winning after last meet…
“It was a pretty good meet for a lot of us. A lot of us had pretty good times and it was just nice to come back and win.”

BATON ROUGE, La. – The No. 4 Texas A&M men’s swimming & diving team claimed victory in a dominant fashion, racking up 15 first-place finishes out 16 events on the day to earn a 182-113 win at the LSU Natatorium Saturday afternoon. Senior Benjamin Walker highlighted the team’s performance as he set a pool record in the 200 breast, finishing four seconds ahead of his closest competition, while classmate Adam Koster notched a pool record of his own as the leadoff in the 400 free relay.

The 200 medley relay team of sophomore Shaine Casas, Walker, Koster and senior Mike Thibert got things started for the Aggies, as it earned the top spot in the first event of the day. Sophomore Mark Schnippenkoetter and junior Felipe Rizzo continued the momentum with first- and third-place finishes, respectively, in the 1000 free.

Walker and freshman Andres Puente tacked on a 1-2 finish in the 100 breast as the Aggies locked up the top two spots for the first of three times against LSU.

It was a head-to-head battle for the Aggies in the 100 free, when junior Mark Theall was able to get his hand on the wall just two-tenths of a second before Thibert as the pair added another 1-2 finish for A&M.

Despite a four-second differential in finish times, the Aggies claimed first and second for the third time when Walker set an LSU Natatorium record with a 1:56.72 finish in the 200 breast and Puente was again just behind him. Walker earned his third victory of the day and wrapped up the individual events with an NCAA B-cut finish in the 400 IM.

The 400 free relay concluded the competition at LSU as Koster added a big finish, setting a pool record with a 43.46 leadoff split to position the Aggies for their final top finish of the day.

Junior Kurtis Mathews, the reigning SEC Male Diver of the Week, again claimed a pair of top finishes after taking first in the 3-meter (404.93) and 1-meter (373.05). Mathews has tallied five first-place finishes this season, recording a top-three score 11 times. After a fourth-place finish in the 3-meter, freshman Victor Povzner turned things around in the 1-meter, using score of 360.75 to finish just behind his teammate in second.

The Aggies will return to the pool on Friday, Jan. 31st as they host SMU for their final dual meet of the season. The Senior Day meet is set to begin at 6 p.m. at the Rec Center Natatorium. Check 12thMan.com and follow @AggieSwimDive on Twitter for updates and results.

Post Meet Quotes
Head Coach Jay Holmes
On the team’s performance …
It was great to get back in the win column. There were a number of places that we were better this week than we were last week, which is, of course, how we want things to happen. An SEC win and a win against LSU are always great, just makes it a whole lot more fun.

On looking toward SEC Championships …
We are getting ready for that, this is obviously a team we are going to see there. There is not a bad team at SEC [Championships], they are all good. This is going to prepare us for it and we just have to keep doing our job, one event after the other. You swim four events a session, and at SEC’s you won’t swim that many, but this gives us an opportunity to begin preparing mentally. SEC’s is the longest conference meet in the country and we are doing our best to prepare for that.

Head Diving Coach Jay Lerew
On the divers’ performance …
Kurtis [Mathews] was solid again, at these kinds of meets you come and only get to practice each dive once before you go. Kurtis did a good job. Victor [Povzner] struggled a little bit, but then he got it together on the 1-meter, so it was nice to finish 1-2 in the 1-meter event.

Senior swimmer Benjamin Walker
On his pool record performance …
It was a good swim, I was really happy with the time. I felt really good in the water and I just wanted to push it as hard as I could, which is good moving forward because I think I have more in the tank in that race.

On looking forward to SEC Championships …
Today was exciting seeing so many guys swim well. I think we are going to have a really great meet at SEC’s. There were some really great races to watch, the 200 free was a really great time, and of course Adam [Koster] breaking a pool record. Overall our team is doing really well and we are definitely going to be good in a month, I’m excited about that.

LSU will be back in action January 31 through February 1 as they will hit the road and head to Houston to face off against Houston and Rice.

“Looking at the team, we are tired,” said LSU head swim coach Dave Geyer. “However, I think that is alright. We did not hide anything about what this tough two week stretch would be like, especially Florida State last night and Texas A&M today. We knew it would be an emotional and physical toll. I just think we were emotionally tired from yesterday’s intense meet and it showed a little bit. At the same time, if you compare this dual meet against our dual meets from early in the season, the results are right in line. To still be able to compete at a high level and be close to season best times is a big positive.”

“As for the seniors, we still have a lot of racing to do and there are bigger goals out there for them,” continued Coach Geyer. “They still have goals they want to accomplish as far as the SEC  and NCAA Championships are concerned. Up to this point though, their contributions have been great. Just by looking at school records, top-times, NCAA qualifiers and so on, it has been a great class and what we expected from them when we recruited them. We’re happy for them but we still have some unfinished business.”

“I am proud of the accomplishments of the divers over the weekend,” said LSU head diving coach Doug Shaffer. “I expected today to be harder coming off of the Florida State meet last night. Although we were a bit inconsistent today, the challenge of going back-to-back days is important preparation looking ahead to our championship season. I also want to congratulate and thank the seniors who have represented our program well during their careers.”

I herd they shaved for the meet.

While they likely didn’t shave for this meet, a lot of schools use a dual meet in mid-late January to determine conference roster spots for those who haven’t secured a spot. That’s why you’ll sometimes see some faster than normal dual meet times at this point in the season, but there doesn’t look to be any eye-popping swims from this meet

Do you mean “heard?” And no, they didn’t. Just an in-season dual meet.