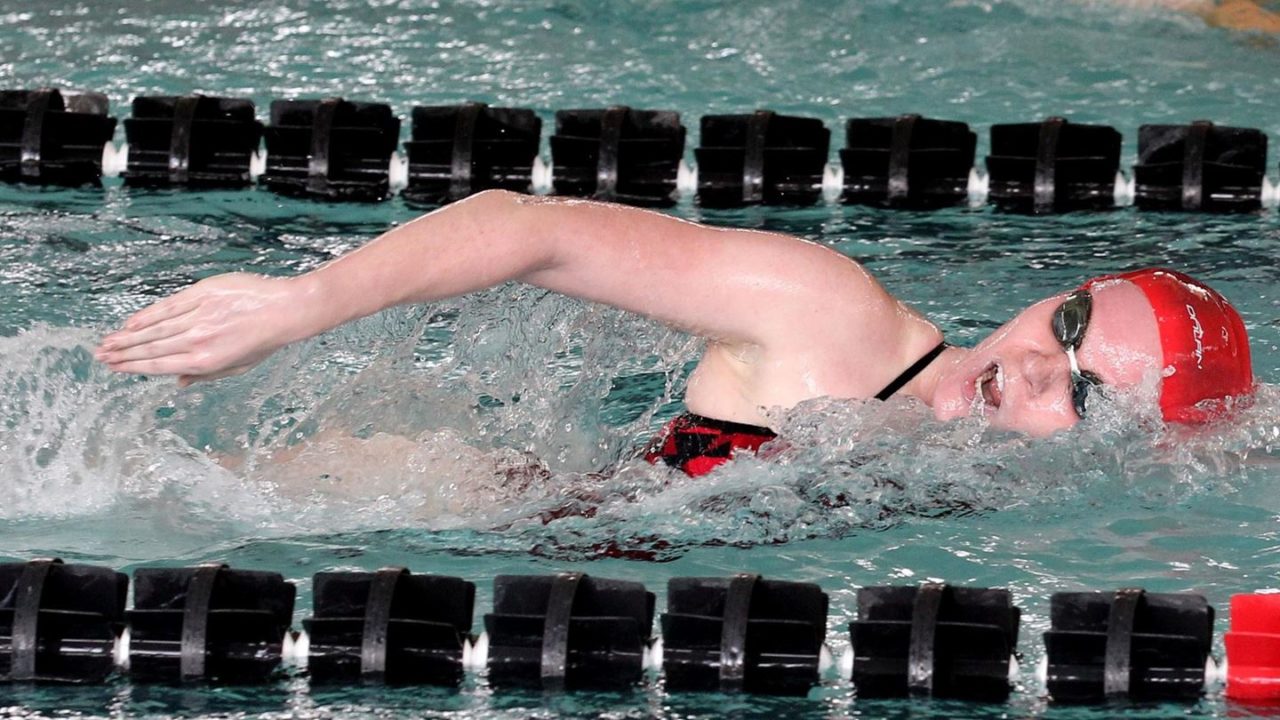 Utah split a dual meet with Denver on Senior Day in Salt Lake City, as the Ute women rolled to a 160-102 result and the Pioneer men came out on top, 183-79. Current photo via Steve C. Wilson

SALT LAKE CITY – Utah Swimming split a dual meet with Denver on Senior Day as the women rolled to a 160-102 result and the men faltered, 183-79.

Just like last night, the women’s team set the tone by starting the event with four-straight wins in individual events. Sara McClendon won the 1000 free in 10:15.24 and would later take the 500 free in 5:00.94.

“I am really proud of the women today,” head coach Joe Dykstra said. “They put things away pretty early. They were sharp, had great touch outs and finished their races. I am very proud of them and the seniors.”

After Kyla Yetter notched the top time in the 200 free, Audrey Reimer rolled in the 100 back. The sophomore was back in the pool to win the 200 back later in the day.

The men struggled against the Pioneers with only Ben Waterman winning the 100 fly in 49.38

Both teams are off for a couple of weeks before taking on BYU in their annual rivalry meet in Provo.

Luke McDivitt, the reigning Pac-12 Diver of the Month, turned in the outstanding performance on Saturday for the Utes. The freshman placed third in the finals of the platform event.

After winning the 3m yesterday, Tony Chen finished one spot out of qualifying for today’s finals, placing 13th.

On the women’s side, two competitors reached the finals of the 3m as Emma Ruchala finished 13th and Regan Caufield placed 16th.

“Luke bounced back really well today so I was happy to see him be able to put yesterday behind him and set a new personal best, moving into fourth all-time at Utah on platform,” diving coach Richard Marschner said. “Emma is really learning how to compete at these large meets as these are the best two days she has ever had at an invite. Regan making finals is a huge accomplishment for a freshman and her best event is coming up tomorrow on tower.”

SALT LAKE CITY – The University of Denver men’s swimming program defeated nationally ranked Utah in a dual on Saturday afternoon, taking the road match-up 183-79. Denver’s women dropped the dual 160-102 before the two program’s return to the state of Colorado to take on Air Force next month.

Neil Wachtler (Waco, Texas) was the next Pioneer to reach the wall first, taking the 100 back after his 48.83.

Denver’s women’s took the second and third spots in the 100 breast on Saturday afternoon, as Vu and Charlotte Simon (Saint Remy, France) finished with times of 1:04.87 and 1:05.12.

Cronin got the Denver women back in the win column with a victory in the 200 fly, taking the race in 2:03.96.
In one of his three event wins of the afternoon, Gilbert completed a Pioneer sweep of the 200 fly with his 1:52.04.

In the back and forth between Auchinachie and Farber this season, it was Farber’s turn to win the 50 free, clocking in at 19.90, followed by Jackson Gainer’s (San Jose, Calif.) 20.84 that was good for second place.

Auchinachie did finish first in the 100 free, reaching the wall in 44.42 for his seventh win in the event this season.

Sofia Nosack (Beaverton, Ore.) led Denver’s women in the 200 back with a second place finish in a time of 2:04.07. Wachtler won the event for the men to continue to pad the Pioneers lead in the dual after being timed at 1:48.77.

Sanes once again led a trio of Pioneers that included Anthony Nosack and Blayze Jessen (Denver, Colo.) to a sweep of the podium in the men’s 200 breast. A 2:01.23 won the event for Sanes, 2:06.53 from Nosack earned second and Jessen reached the wall in 2:08.02.

Gilbert completed his distance free sweep with a 4:38.75, while Johnston once again finished second in the event for the Denver women with her 5:09.21.

David Mihalic (Ljubljana, Slovenia) completed the Pioneers individual events of the afternoon with a 4:06.42 in the 400 IM.

In the final relay and final event of the road trip, Denver’s men captured the 400 free relay as Farber, Sanes, Sykes and Auchinachie combined for a time of 2:59.84 to win the program’s fourth 400 free relay this season.

Diving completed at BYU on Saturday to complete the Pioneers sweep in that dual that started yesterday.

UP NEXT: Denver will be back in action on February 1st when the Pioneers head down I-25 to take on Air Force.