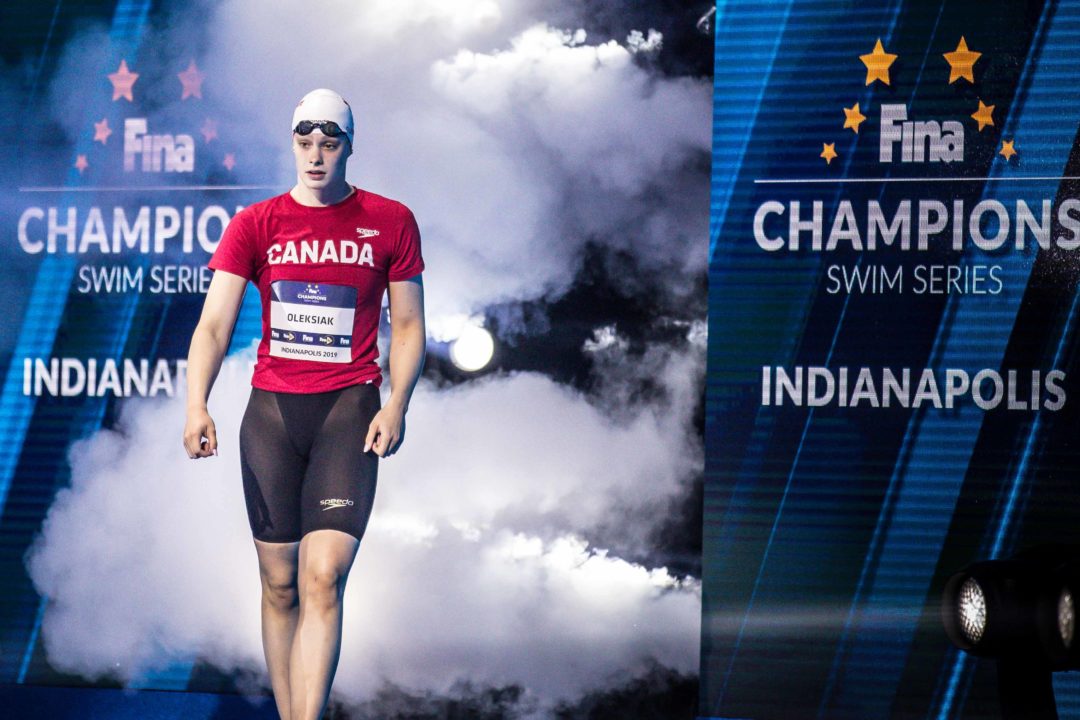 2016 Olympic co-champion in the 100 freestyle Penny Oleksiak took gold in the same event in the last session of the 2020 Pro Swim Series in Knoxville. Oleksiak swam a 53.41 for the win, getting her hand on the wall 0.02 seconds ahead of her co-Olympic Champion Simone Manuel‘s 53.43. Erika Brown took bronze with a 53.49.

That swim for Oleksiak is her best time since the 2017 World Championships. Her fastest time in the 2019 calendar year was a 53.60 at the Canadian Championships.

This swim for Oleksiak gives her her the 8th-fastest 100 free of the season globally, now sitting in between Federica Pellegrini‘s 53.40. Manuels’s swim puts her in 10th this season, with Erika Brown‘s swim being a bit off her 9th place 53.42 from the 2019 Toyota U.S Open.

Oleksiak’s winning time of 53.41 was a bit over her previous best of 52.70 from Rio which in a Canadian and Olympic record.

As a result of her stellar performance in Rio, Oleksiak became an overnight celebrity in Canada and within the swimming community. She has since remained relevant, competing for Canada at major international meets every year since.

Following her 4 medal performance in Rio, Oleksiak picked up bronze in the 100 free at 2016 short course Worlds. She hasn’t hit the podium individually at any major international meets since but has collected relay medals at several meets including Worlds in 2017 and 2019, along with at the 2018 Commonwealth Games.

In a recent interview with Canadian news outlet, CTV News, Oleksiak said that she feels more confident than ever heading into the 2020 Olympics. Now holding the top time in Canada this year, Oleksiak’s shot at a second Olympic performance is looking good. Apart from the 100 free, Oleksiak also has a reasonable shot at qualifying in up to three more events; the 50 free, 100 fly and 200 free. This coming April, Oleksiak, along with the rest of Canada’s top swimmers will have a shot to qualify to represent Canada at in Tokyo.

The defending Olympic champion back in business!
This has got to feel pretty nice to get over a win over Manuel, even if it’s only in-season.

How is her butterfly these days?

Very good question that many of us are wondering. After missing a worlds berth last year in the 100 fly it seems like she’s been focusing on freestyle ever since. I sure hope this isn’t the case though, she’s a great flyer!

Agreed. She swam a 209 200 fly ‘in season’ last spring. Not scaring anyone work class necessarily, but not bad showing her range and fitness at the time.

Maggie Macneil will be reaaly tough to beat

In your rankings, it should list Penny as from CAN, not NED.