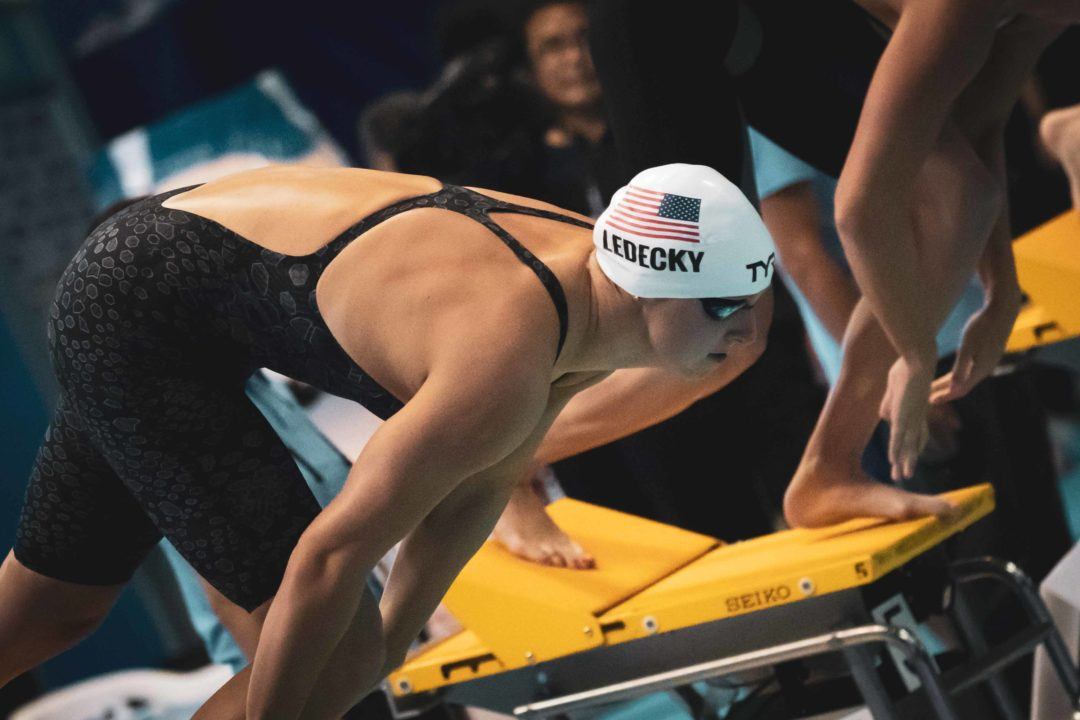 USA Swimming has released its selection criteria for the 2018 Short Course World Championships, selecting the team from the current National Team roster as established by the results of this summer's long course championship meets. Archive photo via Mike Lewis/Ola Vista Photography

USA Swimming has released its selection criteria for the 2018 Short Course World Championships, selecting the team from the current National Team roster as established by the results of this summer’s long course championship meets.

You can see the full USA Swimming selection criteria here. We’ll break things down as simply as possible below.

The U.S. team for Short Course Worlds is notoriously hard to predict, as many athletes will decline their roster spots. Swimmers still in school and competing at either the college or high school level are particularly likely to decline the invite to the event, which takes place from December 11-16 in Hangzhou, China.

It’s worth noting that most priorities call for the fastest times in Olympic events – that would appear to mean the fastest long course meter times. Priority 3 is the only priority which calls for the highest-placing athlete from Nationals, rather than the fastest time.

There are further restrictions based on FINA rules – a nation can only enter up to two athletes per event and can only enter two if both have hit FINA A cuts in either long course or short course. That’s typically not an issue for USA Swimming, but is included in the selection criteria and could be relevant if enough swimmers in a specific event decline the invite.

Dressel, conger , murphy …
Time to see how good those underwater are and have some fun breaking some world records.
Conger definitely got the harder road of them three.

Whilst I agree partly, because Murphy’s more in form, he’s also got a tougher test because virtually all world class backstrokers have superb underwaters these days (unless they’re British it seems, Lord knows why) so the NCAA advantage will probably show through less.

Murphy went 1.48.9 at world short course in 2012 before he even went to Cal. Considering how much size he has put on and his improvements in yards and LCM 1.45.5 200bk is do able. I don’t believe for one minute Mitch Larkin is A) a better backstroke B) faster underwater British underwater …. I’d say no focus is on short course , the mentality is no one cares and the way the year is set up everhtjing based around the ‘window’ March to May to qualify for nationals , all long course. Short course meets are level 3 from January to August meaning development meets. That short course focus on NCAA when athletes are 18-22 have proven that huge… Read more »

I ageee on 200, I think Murphy has some of the best underwaters in the world of any swimmer. I was just saying that elite backstrokers generally have very good underwaters, so Murphy gets less advantage against the world on his walls. By contrast, Dressel’s underwaters are way ahead of any non-American 100 freestyler. On Britain, I agree partly on the culture in terms of taper, but I think it’s also the training culture. Virtually all local pools are 25m, so all kids start training SCM, but there is a view that if you’re good you have to go to a club which trains long course. Also an infrastructure issue, the big training centres (Loughborough the exception) don’t have booms,… Read more »

Murphy/Andrew/Conger/Dressel relay….filthy. With so many of these guys finally free of college, they will have a loaded team if they elect to go for it. They really could obliterate world records.

sub 20 in the medley relay for dressel?

would be surprised if not. it has been done fairly many times I believe.

agreed – no country right now can put such a relay in short course …..

No one can beat the US in LCM relays either. When is the last time a men’s USA MDR lost in a major international meet other than because of a DQ?

Whilst I agree USA should win, for me andrew is the weak link and don’t see murphy having any advantage on bk.

I don’t think Ledecky has swum Scm much, if at all. Lots of wr bonuses in play for her (not that she knows it)

She swam the 2013 duel in the pool. It was the last time she lost a freestyle event over 200m

She was sick at this meet.

Well, she did as a kid (summer league – MCSL). And yeah, she was really fast then too!

With no blocks either!