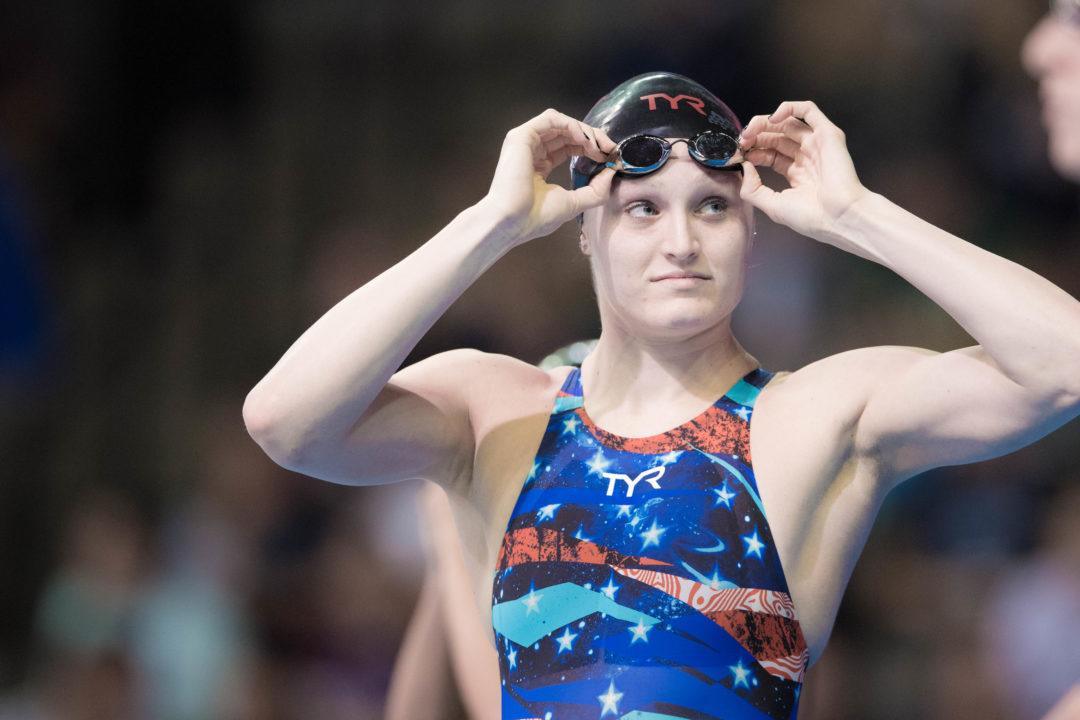 Led in part by a 49.3 butterfly split from Kelsi Worrell, the U.S. National Team took six-tenths of a second off the old U.S. Open Record and American Record. Archive photo via Mike Lewis/Ola Vista Photography

The USA National Team relay of Ali DeLoof, Andee Cottrell, Kelsi Worrell, and Amanda Weir have combined to swim a 3:25.60 and break the American and U.S. Open Records of 3:26.14.

As was the case in this relay, where a Stanford quartet of Ally Howe, Sarah Haase, Janet Hu, and Lia Neal combined for a 3:26.14 at the 2016 NCAA Championships.

Even mid-season, the ability for the U.S. National Team to put together an all-star relay, highlighted by Worrell’s 49.3 fly split, was enough to overcome Stanford’s record (which still is an NCAA Record). Worrell is half-a-second better in yards than any other butterflier in history, but has never swum with as complete of a relay as this one, and that’s the difference-maker.

Stanford still has a chance at taking that record back at this year’s NCAA Championship now that Olympic Champion and the all-time fastest in the 100 yard free Simone Manuel has returned from her redshirt season.

Incidentally, the swim by the Michigan post-grad DeLoof is a lifetime best for her and ranks her as the 8th-fastest 100 yard backstroker in history.

Those splits sound great but more like a great fantasy. I’m sure you meant SCY anyway, but even so every split looks hard to believe. And to put them all together, well … hmmm. I should not be so pessimistic though … each of these swimmers is uniquely talented. So … yeah, I bump this (in SCY not SCM) up from total fantasy (0.01%) to an unlikely achievement (11.2%). I’d love to see it!

DeLoof’s 50.59 leadoff backstroke keg is her or, around 20th- fastest performance all- tine and fadtest all- tine by a Big Ten swimmer (current/ former)the official Big Te. 100 back record is 51.15 by Indiana’s Katerzina Fesenko from a few years ago.

The strokes are wrong

Back breast fly free I wish that was IM order

That freestyle difference though.