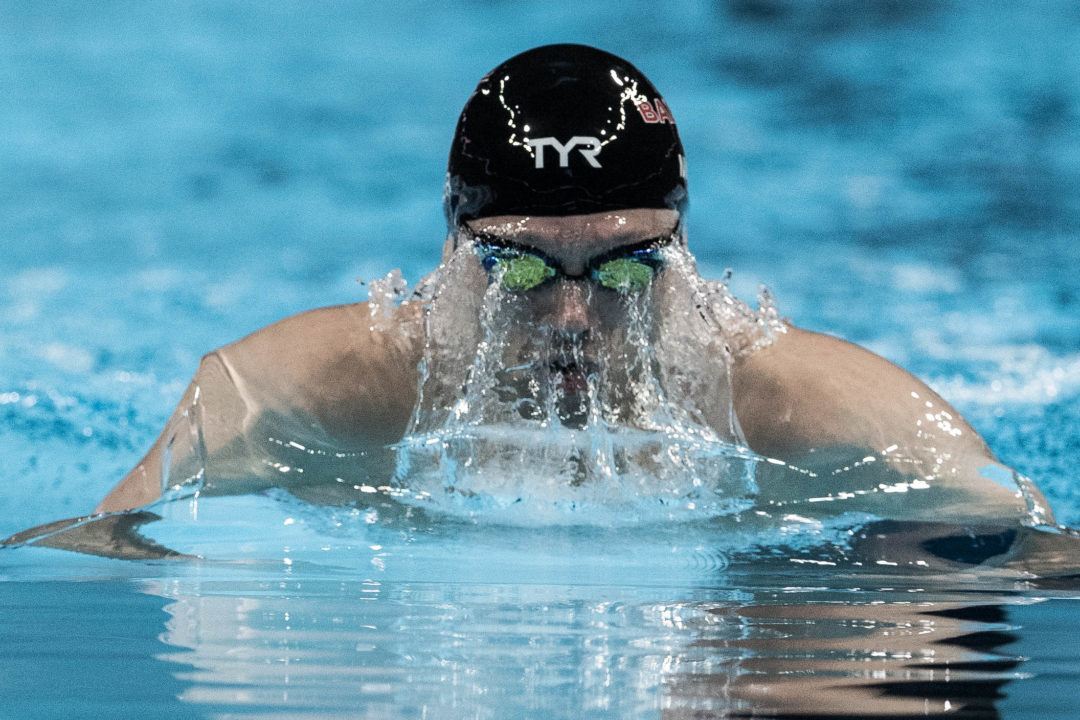 Cody Miller will be one of several Olympic gold medalists facing off today in Indianapolis as part of the USA Swimming College Challenge. Current photo via Mike Lewis/Ola Vista Photography

Leah Smith: I took a month off after Rio (Video)

Tom Shields: I’m not used to having a dual meet inside (Video)

Cody Miller: I just got back to training 2 weeks ago (Video)

Team USA’s Michael Andrew and Cody Miller, the Olympic bronze medalist in this race, swam to a photo finish in the men’s 100 breast

USA Swimming’s inaugural College Challenge kicks off this afternoon, as a mixed squad of veterans and youngsters representing the USA National Team will face a collection of top notch swimmers from the Big Ten Conference.  You can watch the action live at the link above, but we’ll providing live updates throughout the afternoon, as well.

The USA All-Star “B” team got things started in a big way, setting a new American Record in this event.  Former Michigan swimmer Ali Deloof blasted a personal best of 50.59 to get things started.  Andee Cottrell kept up the lead over a field of breaststrokers than included held Olympic gold medalist Lilly King, before handing things over to Kelsi Worrell, who split 49.36, while Amanda Weir brought it home in 48.04 to set the new record.  The USA “A” team placed second in 3:29.52, followed by the Big Ten “A” squad in 3:29.65.

High school senior Brook Forde, who will be swimming for Stanford next year, beat out four current college students to win the 400 IM in 4:02.67. According to the USA Swimming database, that’s the fastest time in the country by almost seven seconds in the 2016-2017 season.  The Big Ten earned some points by placing 2nd-5th

Olympic trials finalist and Michigan freshman Charlie Swanson got out to a big lead by the halfway point, and never let up, securing the win in a 3:46.0.  That’s a personal best for him and the 2nd-fastest time in the country this year, behind only Olympic silver medalist Chase Kalisz‘s 3:41.  17 year-old Robert Finke just touched out Minnesota’s Jakob Muly to help earn some points back for the USA All-Stars.

Mallory Comerford, a Louisville sophomore, already had the fastest time in this event this season, but she knocked another half second off that mark to touch in 47.36, scoring nine points for the USA All-Star team.  Michigan’s Siobahn Haughey went 48.16, good enough for 2nd place and the 3rd-fastest mark of the season, behind Comerford and Simone Manuel.

Indiana’s Blake Pieroni, despite sporting a beard, won this race by over a second, in 42.40.  That gives him the fastest time in NCAA this season.  That mark had belonged to Big Ten teammate and Penn State swimmer Shane Ryan, who is here, but didn’t compete in this event.  Cameron Craig, an ASU swimmer representing the USA All-Stars, touched 2nd in 43.53, a new personal best for him.

16 year-old Eva Merrell knocked five second off of her personal best to secure a win for the USA All-Stars in a time 1:52.20.  Indiana junior Kennedy Goss touched 2nd in 1:52.54, which gives her the fastest time in the NCAA this season.

Olympic finalist Jacob Pebley led wire-to-wire, finishing in a very solid time of 1:39.68, not too far off his personal best.  Former Tennesee star Sean Lehane made it a 1-2 finish for the national team, touching in 1:40.95.  Michigan’s Luke Papendick and Indiana’s Bob Glover both finished under 1:44, but the USA continued to widen its lead, which now stands at 92 to 56.

The Big Ten got its first 1-2 finish here, as Lilly King held off Kierra Smith to win 2:05.64 to 2:05.83.  King had over a one second lead at the halfway point, and had enough left in the tank to hold off Smith.  That puts both swimmers roughly three seconds faster than anyone else in the country so far this season.   With Team USA taking spots 3-5, the Big Ten shaved eights points off the national team’s lead.

This was one of the more exciting races of the afternoon, as three swimmers were within a few tenths of each other at the 100 yard mark.  Cody Miller surged ahead during the third 50, but Nic Fink ran him down in the final yards to take the win, 1:53.98 to 1:54.12, giving the USA All-Stars another 1-2 sweep.  Purdue’s Marat Amaltdinov kept it close for the first half, but faded a bit during the back half and touched 3rd in 1:55.56.

Surprising no one, Kelsi Worrell, the fastest woman ever in this event, touched first this afternoon in 50.46 for Team USA.  Ohio State’s Zhesi Li placed 2nd in 51.42, a new personal best for her, and the fastest time this season among current NCAA swimmers.

Olympic finalist Tom Shields had a reputation as a phenomenal short course swimmer during his college days at Cal, and despite being focused on long course these days, he was within a half second of his best time in this format, blasting a 45.00 to win by over a second.  Indiana’s Vini Lanza had the 2nd-fastest back half of the race behind Shields and touched 2nd in 46.23 to help out the Big Ten team.  Michael Andrew came back on Ohio State’s Matt McHugh and placed 3rd, 46.73 to 46.78.

Leah Smith, the two-time defending NCAA champion in this event, won this afternoon with what is now the fastest time in the country this season.  Her time of 4:32.52 would be an excellent time even in championship season, and is almost four seconds faster than Katie Ledecky went a few weeks ago for Stanford.  Ashley Twichell took 2nd in 4:38.01 to give the USA All-Stars another 1-2 finish, and Rose Bi of Michigan placed 3rd in 4:39.16.

Wisconsin’s Matthew Hutchins did his best to try to pick up one last individual win for the Big Ten team today, but Zane Grothe was able to hold off Hutchins in the final strokes to win 4:15.87 to 4:16.33.  Hutchins’s time is the fastest among current NCAA swimmers this season, taking that spot from Clark Smith’s 4:17.09 he swam last week.

The men’s race was much closer, as Grothe outsplit Ohio State’s Josh Fleagle 1:33.48 to 1:34.10 to give the USA the win here, 6:19.62 to the Big Ten’s 6:19.80.  Pieroni gave the Big Ten a lead with a 1:33.74 lead off leg that gives him the fastest individual 200 free in the country by over two seconds so far this year and put him ahead of Shields.  Anze Tavcar and Brett Pinfold continued to hold the lead for the Big Ten over national teamers Lehane and Pebley, but Grothe pulled ahead of Fleagle halfway through their leg and held on the for the win.

After one day of competition, Team USA leads the Big Ten 185 to 111.  The Big Ten has a lot more swimmers here, but the scoring system favors wins, with 9 of each individual event’s 19 possible points going to the winner, and that’s going to make it very difficult, for the Big Ten to stage a comeback tomorrow.

Meet is very exciting. A LOT of people in the stands which was a bit surprising considering how expensive the tickets were. A lot of best times! A few intense showdowns including the last swim of the night during the 4 by 200 men’s relay! These guys are in the middle of hard training and still swimming very competitively! Looking forward to watching day 2 at THE NAT!

Leah Smith 4:32!!! I know Ledecky can go faster, but she’s still faster than Ledecky has been this season (so far), which is insane considering how good Ledecky is in season as well!

Ledecky has no one to push. She was basically swimming by herself. Ledecky vs Smith should be a good race at NCAA.

Congratulations to Hannah Stevens who lead off the USA All-Star “A” team 400 medley relay with a 51.13- 100 yard backstroke split. That time is the fastest in the NCAA so far this year. Also, her 3rd place finish in the 200 back a 1.53.30 was a personal best and moved her into the 3rd fastest time in the NCAA too.

Just realized that her 1000 is the second fastest swim of all time behind her AM of a 8:59.

Miller should’ve been DQ’d, but they didn’t ask me… 🙂

MALLORY FREAKING COMERFORD!!! She’ll give all the Pac 12 girls a run for their money come March

I can see her challenging the top 3 at NCAAs

ur kidding me right?
lol doubt Manuel Ledecky Neals loosing any sleep over this
Comerford who?

Card gonna sweep all the freestyles 50 to 1650 easy
this is LEDECKY & MANUEL we are talking about folks no one will come close!
there relays will be ridiculous records gonna get destroyed left & right

47.36 is pretty good for in season. You make it sound like the 50 and 100 will be a walk in the park for Manuel, she has to go against Weitzel and Smoliga both of which have a better 50, Weitzel is the American record holder in that and Smoliga is the NCAA record holder. When you say sweep do you mean 1,2,3 finish? The only event I can see that as very likely is the 200 free.

Abbey gon have something to say about that.