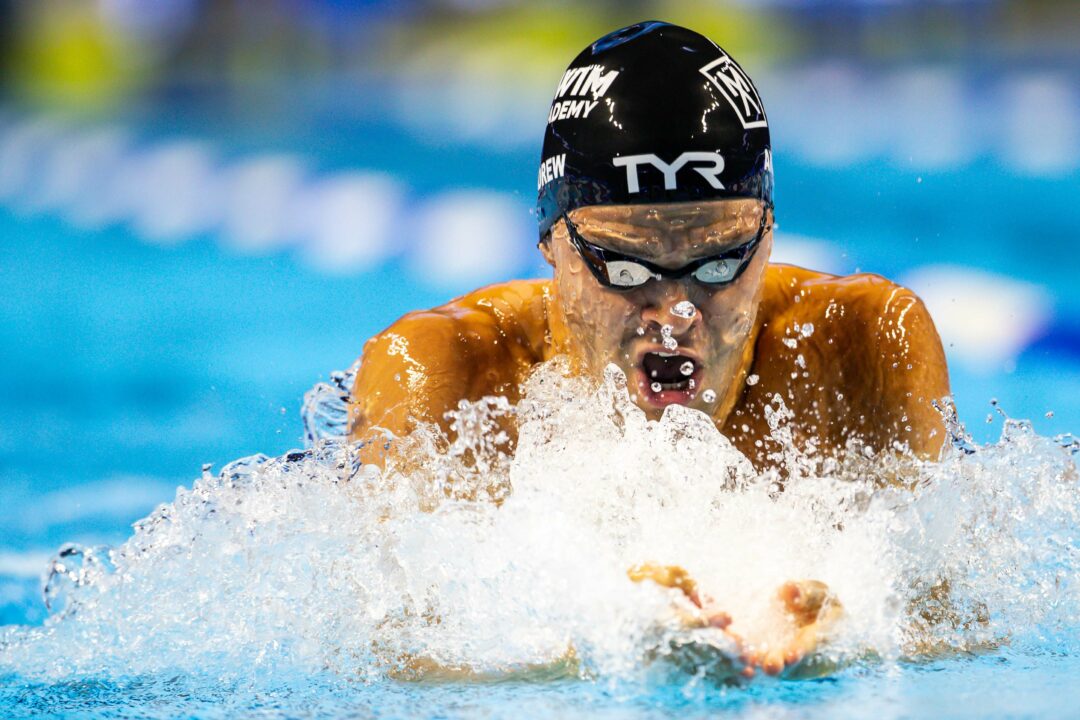 Could this be what the American men needed in order to secure gold in the 4x100 medley or do the British still have the upperhand? Current photo via Jack Spitser/Spitser Photography

In a 100 breaststroke prelim swim at the 2021 US Olympic Trials Michael Andrew established a new American record of 58.19, shaving nearly half a second off Kevin Cordes‘ 2017 mark of 58.64. The time gives Andrew a decent lead over the field heading into the semi-finals with Andrew Wilson sitting in #2 with a 58.80.

An American record during the prelims of the event is quite a statement from Andrew as he still has 2 swims at Trials and up to 3 swims at the Olympic Games to crack the coveted 58-second barrier; a feat that only Adam Peaty and Arno Kamminga have pulled off to date.

While the swim bodes well for Andrew’s individual performance at Trials and the Olympics, it will likely have implications for US’ medley relay efforts as well.

The United States will be attempting to defend its 2016 Olympic gold medal in the men’s medley relay this summer and until now the lack of a 58-low 100 breaststroker was calling the likelihood of that repeat victory into question. The relatively weak 100 breaststroke field in the US was a contributing factor to the States’ relation to silver at the 2019 World Championships where they took silver to Great Britain.

Looking at the Great Britain v. USA battle for gold in the men’s 4×100 medley relay, the situation for the Americans got slightly more precarious when British backstroker Luke Greenbank swam a 53.34 at the recent 2021 European Championships. That’s more than half a second faster than he was in Gwangju both on the backstroke leg of the relay (53.95) and in his individual 100 backstroke (53.75).

Michael Andrew doesn’t have a high number of relay swims to his name on the international stage to indicate how much faster we can expect him to be when he adds a relay take over. One example, however, is the medley relay that he was a part of at the 2019 FINA Champions Swim Series in 2019 that he swam along with Sarah Sjostrom, Nicholas Santos, and Cate Campbell. Andrew delivered a 1:01.08 breaststroke leg which was a decent amount quicker than his 1:02.78 in the individual version of the race at that same meet.

Later that year at the 2019 World Swimming Championships he was also a bit faster on the relay, hitting a 59.75 as a part of the prelim relay team compared to the 1:00.04 he swam individually.

In order to see the full effect of Andrew’s improvements in the breaststroke, he will need to be sharp on the relay takeover. Not known for his relay takeovers, Andrew recorded one of the slowest takeovers among those racing on the medley relay during the heats at 2019 Worlds with his 0.33. He was beaten there by Russia’s Chupkov (0.20), Japan’s Koseki (0.04), Great Britain’s Wilby (0.18), and Australia’s Wilson (0.21).

Another significant factor that could shake things up for the American medley relay in Tokyo is the possibility of a faster freestyle leg. In 2019 Nathan Adrian swam a 47.60 to close out the relay which was more than a second slower than Duncan Scott‘s closing time of 46.14 for the British. While 100 free American record holder Caeleb Dressel will likely be taking care of the butterfly leg, both Adrian and Ryan Held have been faster than that 47.60 in the event and many more men who have been close will be vying for a spot on the team later this week.

Amerika will win as usual. I say by .5 of a second. We are genetically superior.

Privileged Michael Andrew who comes from affluence may only get richer. BTW, he is also white.

Swing and a miss

Is this social commentary or a joke

Not really landing as either. It’s fair to talk about privilege, but random noise like this is likely counterproductive

Lmao that random Reid Carlson article is going to live in infamy on this site and confuse people for a while.

What will actually age less well than the article itself are the comments of those who were so triggered by its mention of privilege.

We’re pretty confident Michael Andrew will fill the A-hole, but who will feel the B-hole for the heats swim in Tokyo?

Nic Fink enters the chat. Think we have a 57 and two 58s tomorrow.

This is a family site….

Is the UK still the heavy favorites for medal gold?

They were never “heavy” favorites by anyone except GB fans

I don’t think there is a heavy favorite between US, GB, and Russia. One person slightly underperforming or having a Duncan Scott-esque split could totally change the outcome.

If Ryan Murphy can get back to his very best.

we will find that out pretty soon ….like today

I think the bigger factor here (than improving from Andrew Wilson’s decent 58.6 split then) is that we absolutely are NOT going to have just a 47.6 free anchor again this summer, like 2019. Whoever it ends up being – I would confidently guess they go 46 mid/high, which should favor US over GB.

Apple or Held can probably put such 46 ich on the anchor ……we will see when the 100 free final comes alive this week .

It’s gonna be interesting what the US do with the mixed medley now because someone big names gonna be upset about not getting a swim in the final. Will they revert back to the more conventional MMFF? Murphy Andrew Huske Manuel?

a Few legit combinations could get them the win ….which one is yet to be uncovered .