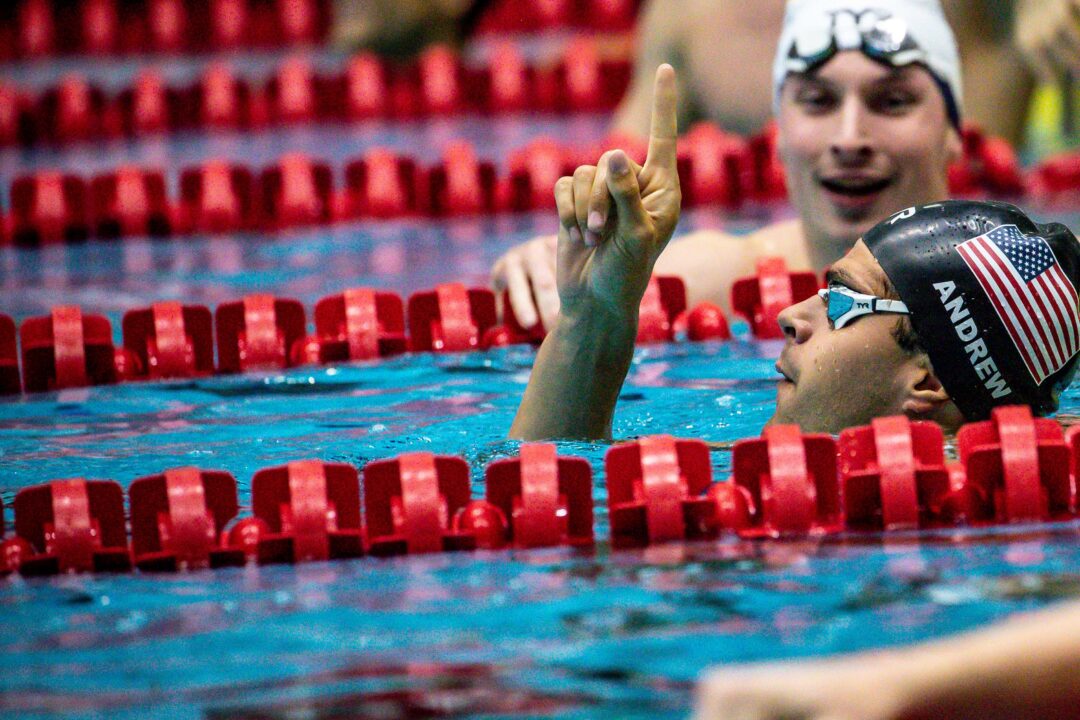 The swim not only makes Andrew the fastest American of all-time, it makes him the #3 performer in the world all-time.  Stock photo via Jack Spitser/Spitser Photography

We didn’t even make it out of the first prelims session before seeing an American Record fall at these Olympic Trials. Michael Andrew, who was just off the American Record mark of 58.64 in May, roared to a massive new best time, touching in 58.19 to take the top seed for tonight’s semifinals.

Andrew took nearly a full half-second off his previous best with the time, and shattered the previous American Record of 58.64 by 0.45 seconds. The swim not only makes Andrew the fastest American of all-time, it makes him the #3 performer in the world all-time.

Here is the newly updated top 5 performers of all-time:

Andrew’s swim also makes him the #3 performer in the world this year, behind Peaty and Kamminga.

Notably, Andrew Wilson, who took 2nd this morning in 58.80, is now the #8 performer in the world.The previous American Record was held by Kevin Cordes from the 2017 World Championships in Budapest. Here is a split comparison between Andrew this morning and Cordes’ 58.64 AR from 2017:

As you can see, Andrew was significantly faster on the first 50 than Cordes was, and he came back a touch faster as well. Andrew also nearly took the race out in a 50m breaststroke personal best. His 27.05 split is just off his fastest 50 ever, which stands at 26.84 from 2019 Summer Nationals.If his efforts in May weren’t enough for some, Andrew has now established himself as the clear favorite for tomorrow’s final. We need to keep in mind that Andrew will still have two more cracks at this race at this meet.

Dang between MA and Wilson US men’s breaststroke is looking solid. I wish could say the same about the men’s 400 free. Hopefully Smith can make me look dumb tonight.

If im on the west coast how do i watch finals live tonight? is it possible?

I’m on the west coast as well. https://www.nbcolympics.com/ if you want livestream at 5 PM or 8 PM if watching on cable or Peacock.

Is this MA’s first AR?

No. He had the would junior record. Lochte had the AR till dressel

doubt it, and he won’t need it to make the team. If he is gonna pop a 57, let’s do it in Tokyo. Actually, if he goes 58-low 3x here at trials, that would be a great sign. It will give confidence that he can deliver a solid relay split.

why not …his confidence level must be boosted allready

Tonight I think he has a chance of going sub 58, if not then he will do it at the Olympics

From what I have seen, he pops best times in prelims, and comes close again in finals. Probably no big drop tonight. Maybe .1 faster tomorrow?