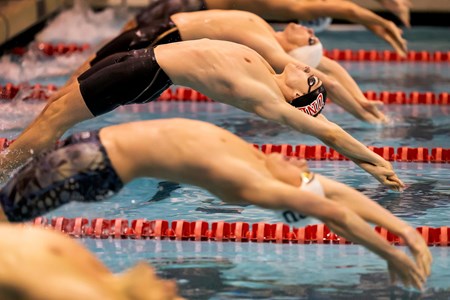 The hosts UNLV Rebels took nine of the sixteen events on the first day of competition against the visiting Arizona Wildcats. Stock photo via courtesy UNLV Athletics

The Arizona Wildcats men and women traveled up to Las Vegas this week to take on the UNLV Rebels in what’s being styled as the “UNLV Invite.” Despite there only being two teams, the meet is using a prelims/finals format, with a total of four sessions over two days.

While neither team’s release mentions scores, Meet Mobile has the UNLV men winning 562-406, and the UNLV women winning 658-370, through the first day of competition. There weren’t any super-fast times on the first day, so beyond the score, perhaps the biggest story is that UNLV swept the top four spots in both the men’s and women’s 500 free, despite that being historically a strong event for Arizona.

Freshman Victoria Gutierrez got her hand on the wall first for the Rebels, touching with a time of 4:53.84 that’s her second-fastest time ever. The UNLV men actually swept the top five spots, led by Vuk Celic‘s 4:22.07. Arizona’s Brooks Fail, who finished 3rd at the 2019 NCAA Championships in this event, went 4:24.89 in prelims, but did not compete in the evening.

UNLV also earned wins in both of the 50 freestyles, with Caitlyn Schreiber ducking under 23 to win the women’s event in 22.92, and Reece Hemmens just touching out teammate Casey McEuen, 20.19 to 20.20, to earn the win in the men’s event.

LAS VEGAS — Arizona took home seven finals victories on day 1 of the UNLV Invitational in Las Vegas on Thursday The Cats and the Rebels wrap up the event on Friday.

Ogi Maric led the Wildcats with a pair of victories, winning both the 100 back and the 200 IM on Thursday. Julia Heimstead (200 fly), Brooks Taner (200 fly) and Jade Neser (100 breast) also had individual wins for the Cats on day 1.

The event will continue on Friday with prelims set for 11 a.m. MST and finals scheduled to begin at 6:30 p.m. MST. Watch day 2 live HERE or follow on Meet Mobile.

LAS VEGAS (UNLVRebels.com) – The UNLV men’s and women’s swimming and diving teams claimed each of the 500 free and 50 free individual wins to highlight their opening day at the UNLV Invitational Thursday at the Jim Reitz Pool. Joining the Rebels at the two-day meet are the Arizona men’s and women’s squads.

THE RUNDOWN – MEN:
* Vuk Celic spearheaded another UNLV sweep of the top three spots in the 500 free with his individual victory (4:22.07). Sophomore Panos Bolanos (4:23.96) touched second for UNLV in his season debut and sophomore Christopher Mykkanen (4:24.74) placed third for the Rebel men.
*The Rebel men found their way back on track in the win column in the 50 free, as freshman Reece Hemmensclaimed the top swim with a time of 20.19. Hemmens’ victory came as part of a close 1-2 punch for UNLV in the event, as junior Casey McEuen (20.20) finished second just .01 seconds after his teammate.
*Highlighting the UNLV finishes in the 200 fly, juniors Michael Klauss (1:49.44) and Michal Cukanow (1:49.84) took second and third, respectively.
*In a highly competitive 100 back race, Bolanos (47.17) finished just shy of the top spot in second place against his former Rebel teammate in Arizona’s Ogi Maric (46.95). UNLV senior Richard Szilagyi followed behind the speedy Maric and Bolanos with a time of 49.30 to finish third.
*UNLV’s men’s squad bounced back with a sweep in the 100 breast, as the junior trio of Jack Binder, (54.09), Ivan Zhukov (54.36) and Sam Willstrop (54.42) took first, second and third, respectively.
*In a speedy 400 free relay, UNLV’s ‘A’ unit of Szilagyi, McEuen, sophomore Steven Butler and Hemmens fought until the final touch in their second place finish (2:56.75) behind Arizona’s ‘A’ squad (2:56.45).
*Topping off the morning events to begin the meet, the UNLV ‘A’ team of Szilagyi, Willstrop, senior Bryan Chavezand Hemmens gave the Rebels a first-place finish in the 200 medley relay.

QUOTABLE: “We are very happy to be racing again. Neither squad is at full strength in terms of numbers, but that is part of the challenge this season. Overall I am pleased with the way the team is approaching the competition.” -Head coach Ben Loorz

NEXT FOR THE REBELS: The Rebels will continue the UNLV Invitational tomorrow with prelims at 10 am.

Where did Brooks Fail, David Schlicht and Noah Reid go? They all swam in prelims and didn’t swim at finals. Potentially Arizona’s three best swimmers…

They had to quarantine after the heats due to a Covid scare, although none have tested positive. Add in the 16 Arizona swimmers who didnt make the trip because of Covid and welcome to 2021. A long bus trip for a heat swim.

There was a time Arizona could travel 8 men to NCAAs and place.

Throw in former UNLV swimmers(Maric) and they win 12-16.

Life of the mid major coach, just keep developing them and try to keep a few if you can.

So, what’s the score so far? Serbian and Croatian throwing it down 💪

lol yeah a 24year old his first year in the ncaa

He who can “cracketh” that 8,000 page NCAA rule book, shall be champion! By the way, I think the oldest NCAA swimmer ever was 26, at the University of Hawaii 🙂