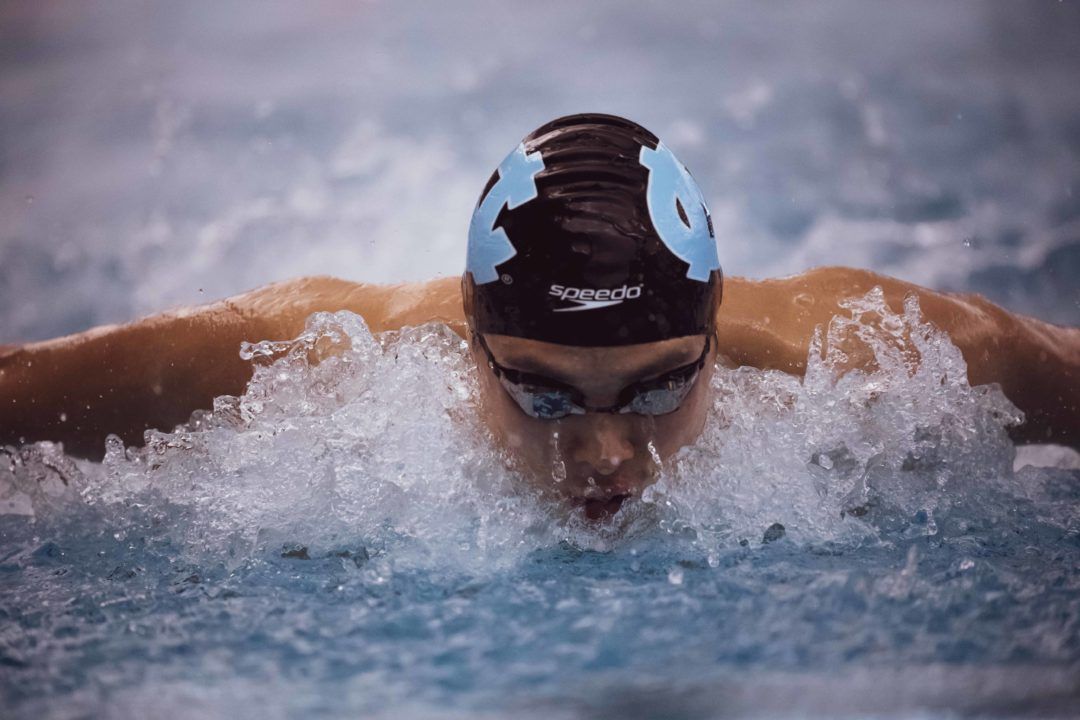 After 2 seasons at North Carolina, Dallas-Fort Worth native Alvin Jiang is coming back to Texas, and transferring to the University of Texas Longhorns. He spent 2 seasons with the Tar Heels after graduating from Cistercian Prep. As a high schooler, he also traned with the Lakeside Aquatic Club.

Jiang will bring a lot of speed to a Texas team that is graduating a lot of the same after their 2nd-place finish at last year’s NCAA Championship meet.

Texas is graduating their top 2 flat-start butterfliers, Tate Jackson (45.78) and Max Holter (46.15) from last season, as well as their medley relay butterflier John Shebat (43.89 on the 400 medley at NCAAs). While Texas is only a few years removed from having the country’s most dominant butterfly group, last season they didn’t score any points in the 100 at NCAAs (though Shebat, primarily a backstroker, was able to cover a lot of that up on relays).

That puts Jiang, rising junior Sam Pomajevich (46.20), and rising senior Jacob Huerta (46.36) at the top of the pile in the 100 fly for Texas among returning swimmers next season. The Longhorns have a little more coming back in the 100 back, but Jiang would still rank 3rd in that group as well.

Jiang was 12th at the ACC Championships last season in the 100 back (46.49) and 100 fly (46.37). That means he accounted for 22% of the Tar Heels’ individual point scoring at that meet as they finished 10th out of 12 teams. Among swimmers, only Valdas Abaliksta scored more for UNC at that meet.

North Carolina has still not announced their new head coach after Rich DeSelm resigned at the end of last season.

UNC’s swimmers scored zero points at NCAAs. What makes Jiang their ‘No.2 scorer’?

You should’ve started this comment with “I didn’t read the article.”

has there any time been list of recruits and how many go out their own state, in football they have shown that huge percentage stay close to home and that is why some state dominate with or without good coaches ….

Swim Swam publishes a list of recruits for a given graduating year & where they have committed. Doesn’t indicate how many stay “in state” but you can count them up for yourself. You might want to look at some earlier “posts” by recruits to find it.

29% of d1 swimmers compete for a school in their home state.

NCAAs is gonna be fun!!!

I’m excited about this, but how on earth does UT still have scholarship money for all these guys?

This guy is most likely not getting any scholarship money.

Most of the big programs are getting athletes for far less than their market value in scholarship money.

Texas and Texas A&M both have enormous endowments in a state with an enormous population that is thirsty for college educations. Both schools were set up with massive tracts of land in the 19th century which have turned out to be very oil rich – over 1 million acres in west Texas. UT gets 2/3rds, A&M gets 1/3rds, and in 2018 it cleared a record $1 billion in profits. Both schools also receive huge income from research royalties and other ‘public good’ projects around the state.

All that adds up to being able to keep in-state tuition very, very low without sacrificing the quality of education.

As a beneficiary, I could not have summarized as well as you did in a few sentences.

There’s no doubt the in-state rate is a big way to bring in guys with little or no scholarship spending. But Jiang surely WAS getting significant (if not full) money at UNC, so he’s probably paying more at UT, even with the in-state rate.

Don’t forget to add the ‘ol room and board. Still looking at $25,440 for in state. But still big savings from out of state NC!

BTW: I hear that Alvin got a great scholarship: He will do fine financially and with swimming. Texas is a great team. Hopefully UNC will bring in a great head coach with some real sound sprint training and drylands. That up and down the pool workhorse approach is so passé and ineffective.

There is science behind this stuff. Swim training is not haphazard stuff. Just ask Texas. It has consistently dominated in swimming. Can’t just be about recruiting because UNC had Jiang, a top recruit.

Recruiting is more important than you think. Yes just ask Texas, Who gets the most top level recruits of any school. Why are the Stanford women do good? Because they recruit the best swimmers .

I am really not interested in the chicken or egg debate. On March 27, 2017 Deselm stated that to improve “We need a combination of higher-caliber swimmers in the program either through recruiting or development.” Duncan Sherrard recruited Alvin, had him going in the right direction and then Duncan left, and who ever took over Alvin’s training made him worst. Alvin is an example of good recruitment without good development. #cleanhouse.

I’ve wondered but not looked into it, div 1 teams have 10 or so scholarships that get divided up amongst the swimmers at percentage ratios. How does in state versus out impact the overall limit? If a school has 10 in state swimmers on full ride and another school has 10 out of state the money difference is huge. Is NCAA limit based on “10” out of state dollar number or actually on %of each swimmers cost?

It’s % of each swimmers cost. So the 9.9 scholarships could be 9.9 out of state or 9.9 in state or any combination in between. The cost to the school would be dramatically different but it is still 9.9 total scholarships in the eyes of the NCAA.

UNC is shooting themselves in the foot without a coach.

Apparently the process has not been the best. Add the fact a change should have been made three years ago and recruiting now happening earlier and earlier…I think the women can come back…the men will have a huge hole to dig out from

With a good sprint coach, UNC men can be very competitive. It’s a great loss for UNC though. Second major student defection for UNC in a few weeks. #coach mike.

The kids are not leaving because they don’t have a coach, they are leaving because of the coaches they do have!!! UNC is taking it’s time so that they can clean house and get the right coaches for these kids. See e.g. new football coach.

Using the football coach search is a bad example. Larry Fedora was fired on a Sunday, and Mack Brown was hired two days later on a Tuesday. Deselm announced his resignation over 2 months ago…..

I was thinking more about quality i.e. right coach not speed i.e. how fast they could fill the position. If they were willing to accept the same level of competence, they could have filled the position in one week.

They have hired two coaches. My question is, who are they?

texas is too good. they are the warriors of NCAA swimming and they are ruining it. texas is a superteam and it’s so annoying everyone needs to stop transferring there

Wow another person to leave at home for NCAAs!

Who knows? We’ll see. What we do know is that he will have two years swimming under one of the greatest swimming coaches in history. If I had a 46.2 100 Fly and had the opportunity I would do the same thing! Congratulations Alvin on your decision. I’ll bet that you’ll never regret swimming for the most successful college swimming coach in history. And by the way, Eddie is also a genuinely humble, kind and caring person.

Agree with everything that you said but Drukstop has a point. Looked up UNC recruits from Alvin’s class up until this incoming class of freshmen at UNC & I’m willing to bet that he had a “full ride” with UNC so I feel that scholarship money had little to nothing to do with the decision to transfer. Might have been because no coach has been named as of yet for UNC. Can’t believe he’s getting a “full ride” at Texas though seeing who they currently have on the team, who’s transferring in as well as the incoming freshmen for 2019. Transfer might have been because of those “flyers” that have graduated this year & him feeling he can fill one… Read more »

Big moves. Should improve a good bit with his great underwaters.